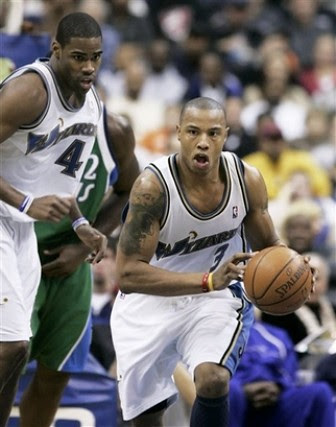 The Wounded Tiger is on the prowl.
Wounded Tiger Theory (woond'-ud ti'-ger thir'-e) noun. The theory that a basketball team (or any other sports team) tends to play harder and (at times) perform better despite the loss of one or more key players.

Usage example: The Phoenix Suns did everything they could Wednesday night to validate Dick Motta's old Wounded Tiger Theory. They came within a couple possessions of the fairy tale that the NBA's justice department was secretly -- but surely -- wishing for as much as the fuming locals waving those "Dirtier Than Dirt" signs, wearing "Stu Sucks" T-shirts and fully blaming the league for this predicament. [From Marc Stein's article For Suns, everything but a W.]

Word history: The term was coined (for use in basketball-related commentary) by Dick Motta. According to this Jimmy Burch article from the Fort Worth Star-Telegram: "Dick Motta, former coach of the Dallas Mavericks, loved to invoke the Wounded Tiger theory any time his team suffered a key injury or played an opponent missing a pivotal starter. Motta's theory, in a nutshell, suggests that the wounded tiger fights hardest, making it the most difficult jungle cat to subdue."

You say tomato, I say zucchini: Bill Simmons' Ewing Theory is probably an offshoot of Motta's Wounded Tiger Theory. The basic tenets of the Ewing Theory are identical to the Wounded Tiger, and it was created several years after Motta first explicated his doctrine (and it seems improbable that Simmons, a diehard sports zealot, would have been totally unaware of it). The main divergence in the two theories is that Motta believed that the team played better despite the missing player(s), while Simmons' theory seems to hold that the team improved because the missing player(s) received too much media attention, ruined team chemistry, or were vastly overrated to begin with.

Famous Wounded Tigers: You can read Simmons' Ewing Theory article for an expansive list of teams that qualify for Wounded Tiger status. But his list has one glaring omission, a team I would rank as the greatest ever example of the Wounded Tiger Theory: The 1993-94 Chicago Bulls. Michael Jordan retired (for the first time anyway), but the Bulls inserted Pete Myers into the lineup and barely missed a step. That team won 55 games -- only two fewer games than the previous championship season -- and they were a couple questionable calls away from heading to the Eastern Conference Finals. And the team that beat them, the New York Knicks, eventually made it all the way to the NBA Finals, where they lost a tough seven-game series to the Houston Rockets. When you think about it, it's not a huge stretch of the imagination to say that that Bulls team could have made it to the Finals, and could have competed with the Rockets, and even could have won it all (since they wouldn't have had to overcome John Starks' dreadful 2-for-18 shooting performance in Game 7). Nobody, and I mean nobody, expected that much from a team that replaced Michael Jordan with Pete Myers. And all the idiots who claim that Jordan did won all by himself -- yes, I'm talking to you, Chris Broussard -- really need to go back and review that season.

Wounded Tigers of Today: Take note, my friends. There are some Wounded Tigers roaming the NBA this season. Take the Portland Trailblazers, for example. They're missing Darius Miles. Sorry, I couldn't resist. But seriously, most people (myself included) wrote them off after Greg Oden's knee injury, but now they're breathing fire and leading their division (ahead of favorites like the Utah Jazz and Denver Nuggets). The Wizards of Washington have also shown a lot of spunk, and some seriously determined defensive intensity, in winning without Agent Zero. And make no mistake, at 22-17 they're nipping at the Magic's heels for the divisional lead. And if last night's dismantling of the Nuggets was any indication, I think there might be a Wounded Tiger on the prowl in L.A.

Anonymous said...
I actually thoguht they were a playoff team (portland) the second they got rid of zach randolph. he just stunk it up and impeded the development of aldridge (who I wanted toronto to select) and then they drafted greg oden and I thought they would contend for deep playoffs, when he got injured I wrote them off. shouldn't have done that HAHAHAH
1/22/2008 2:51 PM

Anonymous said...
Most of the time that theory is true but not always. Look and the miami heat and the cavs. They lost there key players and couldn't win a game. You would think that they would step it up to improve there stock or finally get some shine, but they don't have that fight in them.
1/22/2008 6:24 PM

Anonymous said...
Darius Miles is STILL in the NBA? Damn. Here I thought he shuffled off to Europe or Costco, and he's just been on the DL.

Anyway, this theory may be true, still I don't remember any team winning it all without its best player... chemistry or not.

Let's just say that a losing healthy tiger might become a overachieving wounded tiger. Not a winning one. Not in the NBA.
1/23/2008 2:31 AM

Anonymous said...
Well, yes, you have a point (a BIG point indeed). But that was for one game (and what a game).

Anonymous said...
I'm going to contest the claim of Anonymous re: the Cavs and the Heat, because neither of those was ever a particularly good team.

LeBron, of course, is a great player, but the rest of the team basically consists of guys who hustle, and who play D together. Furthermore, they get wide-open shots because of the way teams collapse on LeBron. 5 guys who hustle without any shot-creators won't win many--their offense is lame without LeBron. And let's not even go into their softball route the the Finals last year. It's not like there's a Scottie Pippen or Horace Grant on that team. Especially the latter. Everybody knows Pippen was a versatile star, but Horace was a guy who could come close to 20-10 on many nights. The fact that he became a role player for the Bulls' first three runs is why they were so reliable.

But the law of averages will win out. Wade's throwing himself to the ground caught up with him, and shows it all to be a magical form of flopping. It works better and is less obvious than most flops, but it also exposes the player to more injuries. Frankly, I think it's karma. Real superstars don't play that way, and consequently real stars have some durability.

Tonewise said...
Give the Raptors back Whore-Hey, T-J and the Baller formerly known as Dr. Drea...

(I think you could raise a very valid point that they fall into the category of a wounded tiger..uh team, they just don't get enough burn in the media for people to realize that all three of them are quite important to their overall success... fine Bargnani doesn't qualify on account of that foul stench following him around right now, and I don't mean Jay Triano.)
1/23/2008 11:39 AM
Post a Comment
<< Home
Subscribe
RSS Feed
Mailing List