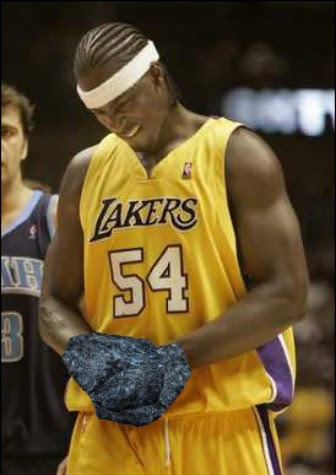 stone hands (ston handz) noun. A term used to describe the hands of a player who has extreme difficulty -- note the emphasis on extreme -- catching a basketball, dribbling a basketball, passing a basketball, and finishing layups. In some radical cases, the player can't even dunk effectively. The dunk, of course, being a shot that's successfully converted something like 100 percent of the time. Let me put it another way: The only reason you would ever hand this person your baby is if you didn't want that baby anymore. Also, you probably shouldn't let him carry the grocery bag with the eggs and bread in it.

Usage example: And Kwame Brown flat out sucks. He has stone hands, and, when the sun shines on a dog's [expletive for "butt"] and he DOES catch the ball, he either turns it over or misses a two-footer. [From Hoffa the Great's blog on FanNation]

Word trivia: During L.A.'s 106-98 loss to the Suns, Lakers fans played The Giant Falling Anvil to Kwame Brown's Wile E. Coyote, booing him with a pitiless rage that would make even Hannibal Lecter a little uneasy. Kwame played so badly -- 3-for-8 shooting, two blown layups, one missed dunk, and 7 turnovers -- that one wonders whether he has the manual dexterity necessary to accomplish even the simplest of tasks, like using a remote control or unwrapping a piece of gum.

You poor little Lakers fans think you really have it rough, don't you? Well, screw you guys. You don't know what "rough" is. Rough is being a long-time Utah Jazz fan who lived through a decade's worth of Gregory Donovan Ostertag. Don't talk to me about blown passes and missed dunks. There's a 10,000-page book on the subject; you'll find it in the library, alphabetized by author: Ostertag, Greg.

Do you realize that Ostertag stood 7'2" and weighed 300 pounds, and he had the most prolific passer of all time tossing him the rock, and he still shot a miserable 48 percent for his career? And none of those shots were put up outside of two feet! Nobody should blame John Stockton or Karl Malone for those heartbreaking losses in the 1997 and 1998 NBA Finals. If Ostertag could have held onto a damn ball once or twice, the Jazz might have won back-to-back titles.

Would you like some insult with your injury? Just how stiff and impenetrable are Brown's stony hands? Even the video game Kwame can't catch the damn ball. Or even react to it as it hits him square in the chest. Man, today's video games are realistic.

djnumbers said...
as a Laker fan, it hurts me physically to watch this guy play. and then i want to hurt mitch kupchak for trading an eventual all-star (caron butler) for him. they traded caron and chucky brown for big doofus. imagine how good the lakers would be with caron starting at three, including the two previous seasons.
1/18/2008 8:16 PM

Anonymous said...
What's worse is the greatest baskebtall player ever thought this guy was good enough to be the #1 pick. Jordan would likely have beat the crap out of Kwame if he played on the Bulls for playing this bad.
1/19/2008 6:46 PM

Anonymous said...
"The only reason you would ever hand this person your baby is if you didn't want that baby anymore."

Anonymous said...
The thing about Kwame's hands is that they are almost cartoonish-like in how small they are compared with the rest of his body. Have you seen that Burger King commercial for double cheeseburgers where the guy says he can't hold their large burgers and then shows his tiny hands? Is it any coincidence that the first thing I thought of when I saw those hands was Kwame Brown's hands?

Some people just have bad hands even if they are somewhat large in relation to their body. But Kwame has bad hands AND small hands. It is really hard to do anything with a basketball with small hands. This is especially true in the low-post, where big men react more slowly than others and are constantly getting the ball clawed out of their hands by other big men and even guards and SFs.

So with that perspective, I don't really blame Kwame. He tries hard and certainly has talent, but he has a fragile mentality and those cursed tiny hands. I would blame the Wizards and MJ into not figuring out that small hands and bad ones are bad thing and can't be helped that much. And I would especially blame MJ for chewing him out so much given his fragile mentality.
1/20/2008 6:18 PM

Anonymous said...
Anonymous - "It is really hard to do anything with a basketball with small hands. This is especially true in the low-post, where big men react more slowly than others and are constantly getting the ball clawed out of their hands by other big men and even guards and SFs."

Kevin Willis (21-year veteran that played for the Hawks, Spurs, and several other teams) also had small hands (and feet) compared to his 7-foot frame, and he was a decent rebounder and inside player. It's not small hands that's the issue, it's small talent.
1/20/2008 10:56 PM

Anonymous said...
That videogame simulation is highly inaccurate. It shows him catching the ball twice and only getting hit in the chest once.