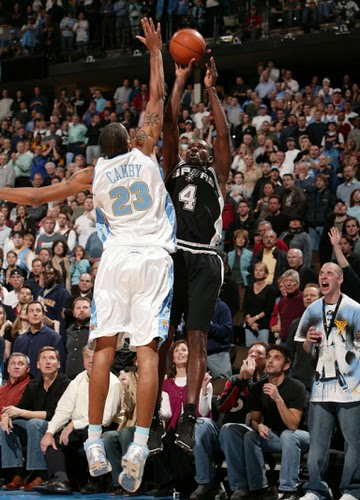 dirty triple (durt'-e trip'-uhl) noun. A triple-double in which one of the three "double" categories is blocked shots.

Usage example: Before he transformed into a creaky mummy, Dikembe Mutombo was a master of the dirty triple.

Word history: The term was coined by Basketbawful reader LooseChange. Here's what she had to say about it:

"Okay, I know what you're thinking: It would make sense that a dirty triple would be a triple double that includes 10 turnovers, since most definitions of the word dirty are generally negative. I will argue, however, that blocking 10 shots is 100 percent oh-so-dirty in a very good way. Hell, any shot forcefully swatted away is a thing of gettin'-down-and-dirty defensive beauty. The most recent occurrence of the extremely rare dirty triple was posted by Marcus Camby on December 26, 2007, during a beat-down of the Milwaukee Bucks in which the Nuggets were up by as many as 39 points. To add insult to injury, Camby notched the final 3 points needed to complete his 10 point, 11 rebound, 10 block performance with a 3-pointer, only the ninth in his eight-year NBA career.

"The first time this term popped in my head was during the Suns-Nets double-overtime thriller last season, which saw Steve Nash and Jason Kidd go head-to-head in one of the most entertaining games I've recently had the privilege to witness (my sincere apologies to anyone who hasn’t had the opportunity to see it). In the game, Kidd tied Wilt Chamberlain for third all-time in career triple-doubles, and I remember one of the announcers mentioning that The Big Dipper's total is no indication of his actual accomplishments, since blocked shots weren't officially recorded until the 1973-74 NBA season. Legend has it that Wilt unofficially blocked up to 25 shots during a game. How is that not dirty?! And really, who more appropriately represents the word "dirty" in every facet of his game than Wilt the Stilt? Good thing no one ever officially recorded statistics for his off-court 'dirty triples'...."

Word trivia: According to basketball-reference.com's list of triple doubles since the 1986-87 season, there have been 46 dirty triples in the last 20 years (counting Camby's most recent one). During that period, Dikembe Mutombo has led the league in dirty triples with 10. Hakeem Olajuwon and David Robinson each had nine. And this is a little surprising, but Shawn Bradley -- yes, that Shawn Bradley -- is in fourth place with six. Camby currently has three to his credit. Other notable dirty triplers include Mark Eaton, Manute Bol, Larry Nance, Benoit Benjamin (yeah, I couldn't believe it either), Shaq, Ben Wallace, Jermaine "The Drain" O'Neal, and Andrei Kirilenko.

Update: Some people have disagreed with us on the use of the word "dirty," but Andre Kirilenko gets it. We think. He recently had this to say about Marcus Camby: "I would say he's the best dirty worker in the whole league. You know, everything on the floor -- rebounds, steals, blocks, running the floor, being a defensive stopper. He's really a guy who is, like, joker for them." As the reporter who published this quote pointed out, that's dirty as in "willing to do the dirty work" and joker as in "wildcard." Of course, maybe the fact that a Russian-born player who speaks broken English "agrees" with our use of the word dirty doesn't really help our cause...

Anonymous said...
I gave the triple double(with TOs) the title of the D-Wade Triple double

Basketbawful said...
shrugz -- I actually have a special name for those kinds of triple doubles (which will be tomorrow's WotD). But the D-Wade Triple Double will be a good alias. I wish I could find a list of dubious 10-turnover triple doubles...
1/15/2008 1:09 PM

Anonymous said...
I didn't remember Shawn "Dunk on me" Bradley was able to pull down double-figures rebounds.
And I am still in awe of the Benoit Benjamin "dirty triple".
Which team in the hell would permit to Benjamin to reject ten shots? Really?
BTW: beware, I foresee that Sean Williams will be the next dirty triple king. Watch and see.
1/16/2008 3:14 AM

Clifton said...
"BTW: beware, I foresee that Sean Williams will be the next dirty triple king. Watch and see."

Yes, I said the rest of the NBA combined.