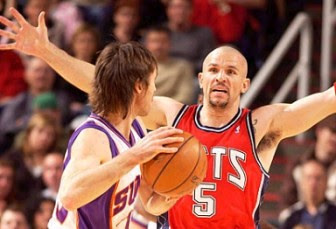 Brian Cardinal: The Custodian actually got into a game on Friday night, playing six minutes against the Sonics and contributing zero points, zero rebounds, zero assists, zero...well, you get the idea. He did miss two shots, though.

Personal anecdote: Believe it or not, I once attended the same Sports and Literature class as Brian Cardinal. Each day, he'd arrive at class (usually five or six minutes after the bell), walk to the last desk in the back corner of the room, flop down with a loud groan, and go straight to sleep. Sometimes he'd even snore. Mind you, this wasn’t a 7 a.m. class or anything. It was held in the afternoon.

Around mid-semester, each student had to meet with the professor one-on-one to discuss our progress. During my meeting, I jokingly brought up the fact that Cardinal slept through every class. She kind of smirked and said, "Yeah, I know. I might have to rattle his cage one of these days."

"One of these days" turned out the be the very next class. We were reading this yawnfest of a book called Aquamarine, which was the brave story of a former Olympic swimmer and her personal struggles. Or whatever. I don't remember exactly what her struggles were, but she did eventually realize she was a lesbian, so the book had a happy ending. Anyway, during that day's discussion of the latest reading assignment, the professor asked, "So what happened in the main character's past that had the most profound effect on her life?" After a cursory glance around the classroom, she said, "Brian? Brian. Brian!"

Cardinal jerked up with a snort and everybody kind of laughed. He stared at her blankly for a few seconds, and she said, "What happened in her past, Brian? The thing that's haunted her throughout her life?"

"Uh, well," he said, "I guess, you know, she was traumatized by, uh, when her parents died in the car accident."

After a slight pause, the professor said, "There was no car accident, Brian."

At this point, the professor was trying really hard not to laugh. "Her parents didn't die, Brian. They lived."

You would have thought the class would have been cracking up by that point, but they weren't. In fact, it was dead silent. The professor just stared at Cardinal for a few more seconds (although it felt like longer), then she said, "Okay then, moving on..."

One final note: That incident changed nothing. Cardinal continued to sleep through class. And I'm sure he got whatever grade was necessary to maintain his NCAA eligibility.

Rudy Gay: He missed the Grizzlies’ game against Seattle with “flu-like symptoms.” Yeah, we know what that means...

Reggie Evans: He made the first three-pointer of his career Friday night against the Celtics. Congratulations, Reggie! But I can't help but wonder: Why was Reggie Evans shooting a three?

Vlade Divac: Kevin Garnett blocked two shots against the Sixers on Friday, passing Divac and moving into 23rd on the all-time list. Do you suppose Vlade flopped when he found out?

Mardy Collins: The Knicks guard scored a one trillion against the Wizards. Sadly, that's not even the low point of Collins' season. That would be either the two trillion he scored on December 8th against the Sixers, or the one second he played on November 21st against the Pistons.

Raef LaFrentz: He played three minutes against the Heat on Friday, contributing 2 personal fouls and a mildly sweaty jersey. Everybody likes to bring up his obnoxious contract (nearly $12 million this season, and almost $13 next season), but here's another little fun fact about Raef: He was the third overall pick in the 1998 NBA Draft. He was drafted ahead of Antawn Jamison, Vince Carter, Dirk Nowitzki, Paul Pierce, Bonzi Wells, Rashard Lewis, and Cuttino Mobley, among others.

Miami Heat, part 1: As of Friday night: Twelve losses in a row. Twelve.

Dwyane Wade's 4th quarter against Portland: The Heat had a real shot at breaking their losing streak on Friday, thanks mostly to Wade's 37 points. Unfortunately, Wade scored only two points in the forth quarter, during which he shot 1-for-7, including a miss that would have tied the game with less than 2 minutes left.

Miami Heat, part 2: As of Saturday: Thirteen losses in a row. And this loss was to the Knicks. At home. The Heat once again choked up a game in the fourth quarter, getting outscored 16-8 over the final 6:44 and missing nine of their final 12 shots. This is Miami's longest losing streak since their first year of existence, when they lost the first 17 games of the 1988-89 season. Of course, that team was lead by Kevin Edwards and Rony Seikaly, not Dwyane Wade and Shaq, and they were coached by Ron Rothstein (career coaching record 110-240), not Pat Riley (1,190-649 and five championships). So, you know, at least they had an excuse.

Andrea Bargnani: The battle for Worst Number One Overall Pick Ever continues. Bargnani knew it would be hard to surpass Kwame Brown's effort against the Suns, but he did his worst: 2 points (0-for-3) and 4 fouls.

John Salmons: You've got to feel for this guy. He freaking carried the Kings the last couple months while the team was waiting for Mike Bibby, Kevin Martin, and Ron Artest to return from injury. Now that they're back, he's the odd man out in the Kings’ offense. On Friday night, he got only two shot attempts, and he missed them both.

Mark Madsen: He scored a two trillion on Friday night against the Suns…wait, Mark Madsen’s still in the league?!

Chicago Bulls: They got into a shootout with the Golden State Warriors. You can probably guess how that turned out. Remember when the Bulls were a scrappy, hard-working team that loved to play defense? Seems like a long time ago.

Detroit Pistons: A winless weekend for the Pistons? A home loss to the Kings (17-22), followed by a road loss to the Bulls (16-23). The Bulls, by the way, were playing their fourth game in five nights, were without Luol Deng, and, you know, they suck. Yet Chicago is 3-0 against Detroit this season. Weird.

Troy Murphy: He shot 1-for-9 against the Kings. That's why you don't give Murphy 9 shots.

Eddy Curry: He had 6 points (3-for-10) and 3 rebounds against the Heat. Remember when people said he was the next Shaq? Although right now, he really is playing like Shaq.

Jason Collins: On Saturday, he scored zero points (0-for-1) and had one lonely rebound in 10 minutes of "action." On Sunday, he scored a one trillion. He's now played 36 games this season, and he's gone scoreless in 22 of them.

Luis Scola: His 2-for-11 shooting performance against the Spurs made them feel a little better about giving him away to the Rockets.

Anonymous said...
Objection to Scola. Dude came up with some major important rebounds and hustled his big Argentinian ass off. Without him, the Rockets don't win that game.
1/21/2008 12:07 AM

I mean, I already stated I'm not his biggest fan, but shoot, this guy has some talent... Has he become a basket case?

stephanie g said...
Is there a specific rule which states an NBA team can't have a woman on their roster? If not, I want in on this. I'll take a couple million, except instead of being an on court liability like this nice list you made I could just sit on the bench and be an extra cheerleader. LA sounds good.
1/21/2008 2:32 AM

Anonymous said...
I always wondered about that

like if Candace Parker is really that good she should be able to compete in the NBA. maybe play with her brother on the raptors
1/21/2008 9:15 AM

Anonymous said...
you should give a word of a day for players who don't even play more than 30 seconds to qualify for a one trillion

Anonymous said...
What about the stinkfest that was Minnesota v Phoenix?