It wasn't long ago that Shaq was rather dismissive of Yao Ming, both as a player and as a person. This general lack of respect began in Yao's rookie season when Shaq said "I look forward to breaking down that mother [expletive]'s body" and culminated with The Diesel's now-infamous "Tell Yao Ming, 'ching-chong-yang-wah-ah-soh'" quote*. Harsh and unwarranted? Sure. But that kind of Alpha Dog behavior is typical of someone who's on top of the mountain and can see the competition climbing up after him**.

I guess things have changed, though, because The Big Gifty has a present picked out for Yao's third wedding ceremony (to be held soon in Houston, Texas). "If you let me choose a wedding gift for him, I would give Yao four 24-inch customized rims." And if you're wondering why that quote is so crisp and clean, it's probably because it came through an interpreter. Shaq's currently rocking through China on a promotional tour for Li-Ning, China's leading sportswear manufacturer***.

Apparently, Yao isn't a fan of blinging out his cars. That's great, but when Shaq offers to pimp your ride, you say "yes" and "thank you." Otherwise, you can expect an extra-large elbow in the chops next time you play the Heat. Assuming Shaq isn't injured, of course. 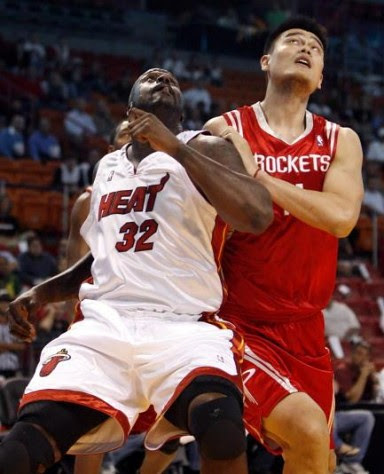 Those rims I'm giving you are gonna
be wang wah ching cha, big guy.
* Yao's response? "Chinese is a difficult language." Good one.

** In 1986-87, Larry Bird was coming off his third straight regular season MVP, his second Finals MVP, and his third NBA championship. What's more, many people were proclaiming him to be the greatest player of all time. If anybody should have felt secure with their status in the league at that time, it should have been Larry Legend. However, that didn't prevent him from dropping the following bomb on Jordan, who was suddenly the league's leading scorer and headline-grabber: "When [Jordan] came into the league, I thought he would be a great all-around player, but...right now, the only thing he does is shoot 30 times a game. I'd never want to play like that."