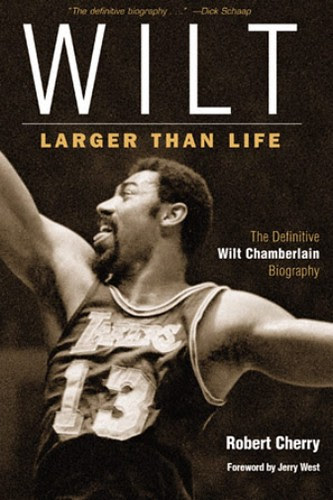 If Kobe Bryant is the most polarizing figure of the new century, then Wilt Chamberlain was easily the most polarizing character of the last one. Depending on whom you talk to or what you read, Wilt was either a selfish loser or the best basketball player of all time. Some people claim he was self-centered, self-indulgent, self-aggrandizing, and any other "self" you can think of. Others believe that he was a gentle, caring, philanthropic soul whose frequent trips down the Ego Superhighway were just amusing examples of "Wilt being Wilt."

So -- evil or good, hero or villain -- which was the "true" Wilt? Honestly, I think he was all of those things. Indisputably great and monumentally self-absorbed, Wilt wanted not a little, but a lot...of everything: To win and to break records, to be The Man without having to take responsibility for tough losses, to love and be loved without the burden of committment. He was a walking, talking, high-scoring paradox.

In some ways, Wilt was almost unknowable. He was shy, secretive, and tended to compartmentalize the various and sundry aspects of his life. But I think that knowing and understanding Wilt Chamberlain -- or, at least, trying to -- is important. He's one of those rare figures that helped define, or redefine, the game of basketball. The NBA created the goaltending rule because of him. They widened the key in part because of Wilt's dominance under the basket. The rule that you can't cross the line on a freethrow until the ball hits the rim was instituted because the league was afraid Wilt would just try to dunk his foul shots (which he was fully capable of doing).

I've read countless books about Wilt, from his autobiographies to novels like The Rivalry: Bill Russell, Wilt Chamberlain, and the Golden Age of Basketball. There are many subtle layers to the man, and you really need to take from multiple sources if you want to get a broad sense of who he was (as well as who he wanted you to think he was). One of the more recent sources is among the best: Wilt: Larger Than Life.

If you're looking for in-depth descriptions of his various in-game accomplishments, then this book isn't for you. Many of his basketball feats are merely summarized and some have been omitted altogether (although, to be fair, Wilt's records would fill an entire book on their own). The author, Robert Cherry, clearly was much more interested in painting a portrait of Wilt the human being than Wilt the basketball superstar. The book fills in a lot of the gaps regarding where Wilt came from and what he was doing with himself when he wasn't dunking on people. There are countless interviews and first-hand accounts of his life, and not only from former players, rivals, and coaches. There are also a great many quotes from the people who knew him in his every day life: lawyers, agents, doctors, family, friends, his lovers, people who hung out and played vollyball with him on the beach, and some of the fortunate many who met him only once for the briefest of moments.

All in all, the book shows Wilt as a person who just wanted to live his life and be happy. He just happened to be over seven feet tall, filthy rich, and incredibly famous. If all you ever knew of Wilt was what he did as a basketball player, you might be interested to discover that he donated time and money to various womens' athletic teams. You might even be touched by the story of how he befriended former teammate Paul Arizin's granddaughter, who was dying of a terminal illness. And you might be surprised at how difficult and lonely the last few months of his life were.

The only criticism I have is that Cherry was, at times, a little too generous to Wilt, tending to gloss over his less appealing character traits while slightly over-emphasizing the better ones. There also were times it seemed as though he was trying to make excuses for Wilt (particularly when discussing how Wilt took only two shots during the second half of Game 7 of the 1968 Eastern Conference Finals). I can forgive these faults, however, because there have been many, many things written that highlight Wilt's dark side. This book was a refreshing change, and an enlightening look at one of the most important men to ever put a ball through a hoop.

Basketbawful said...
The following excerpt is from Wilt's bio on NBA.com:

"During his career, his dominance precipitated many rules changes. These rules changed included widening the lane, instituting offensive goaltending and revising rules governing inbounding the ball and shooting free throws (Chamberlain would leap with the ball from behind the foul line to deposit the ball in the basket)."

It would seem that Mikan's dominance was the impetus for the defensive goaltending rule. The subject of the widening of the key is a matter of some dispute. Obviously, Wilt's bio on NBA.com says the lane was widened because of him. And the Basketball Hall of Fame also credits him for that change. However, the NBA.com summary of the 1951-52 season says that "the lane was widened from six to 12 feet in an attempt to cut down [Mikan's] dominance."

Furthermore, various other books have mentioned how the lane was widened because of Wilt, and some of his critics (such as Kareem Abdul-Jabbar) have derided Wilt's scoring accomplishments pre-lane widening.

So...honestly, I have no idea what the correct answer is at the moment. I'll keep looking into it.

Anonymous said...
...and some of the fortunate many who met him only once for the briefest of moments.