Monday, April 30, 2007
The Chicago Bulls' difference maker? Basketbawful.
By Basketbawful at 8:19 AM
4 comments

It's official: The Chicago Bulls have swept the defending champion Miami Heat. No repeat for the champs. No more 16 freethrows per game for Dwyane Wade. No more rings for Shaq. No more theatrical inspiration from Pat Riley. No more temper tantrums from Gary Payton, crazy shots from Jason Williams and Antoine Walker, and no more insane screaming/flexing/staring by Alonzo Mourning.

But what made the difference between last year's 4-2 first round loss and this year's 4-0 victory? Was it the addition of four-time "Defensive Player of the Year" Ben Wallace? The emergence of Luol Deng as an all-star caliber player? The continuing scoring exploits of Ben Gordon? The bulldog coaching style of Scott Skiles? Or was it simply the ongoing maturation of a team full of talented, hustling, hard-working players?

Nope. It was none of that. It was all Basketbawful.

Ten days ago, I resolutely stated that the Bulls had no chance whatsoever to overcome the Heat. On the surface, it seems as if I simply made a tragic error of judgement. But that's not it at all. I wasn't discounting the Bulls; I was helping them. Allow me to explain.

I've already described the phenomenon of the stat curse. This is where a team or player is undone after a broadcaster, analyst, and/or fan cite a positive statistical trend related to that team/player. For instance, if Tracy McGrady steps up to the line and the announcer casually mentions that he's 10-for-10 on the night, he's going to miss the next freethrow. Or if anyone notes that a team hasn't committed a turnover yet, they'll immediately throw the ball away. This stuff happens all the time.

But what you might not know is that there's also a reverse stat curse. This is where a negative statistical trend is noted, and the opposite happens. A terrible freethrow shooter hits two in a row (or seven of eight, as Ben Wallace, a 40 percent foul shooter, did last night). A team that plays no defense holds their opponent under 100 points. Or a team that's supposed to lose a game or series...wins.

So that's what happened. I pulled off one of the greatest reverse stat curses of all time. My bold prediction actually guaranteed that the Bulls would win. If the Bulls go on to win the title, I'll be expecting a championship ring for my efforts. 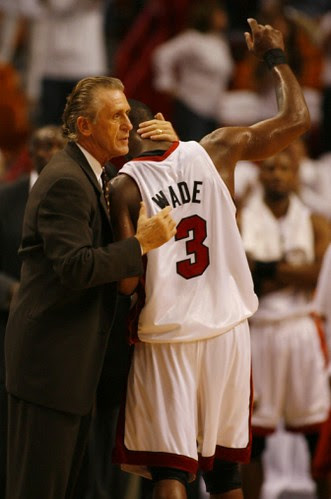 Wade was swept away by emotion. Get it?
Swept away? It's a homon...forget it.

Al James said...
All things considered, the Heat were the worst team in the playoffs this year. Going into the playoffs I would have said Orlando was, but at least they had a pulse. When your team freethrow percentage is worse than Ben Wallace's, you fucked up. At this moment I'd alsolike to mention that the Pistons have no chance against the Bulls. (>_>) (<_<)
4/30/2007 10:17 AM

Anonymous said...
I'm glad you can use that excuse for giving up on the Bulls to early. All in all, the Bulls just played circles around that old and busted team.

Word of the Day
Previous Posts
Houston Rockets rewrite history. The bad way.
The Pacers: "We suck. Don't leave us."
It's official: James Posey sucks.
Word of the Day: Game 1-itis
An apology to coach Mike D'Antoni
Bulls/Heat: Game 1 Recap
The Bulls have no chance against the Heat (and her...
The Top 5 First Round Playoff Flops
Backboard:1 Kid:0
Wade and Lebron are the new Larry and Michael