Mark Cuban Rule (mark kyoo'-bun rool) noun. The informal name for legislation enacted by the NBA to regulate the behavior of team owners at games. The act requires owners to refrain from entering the court, taunting players or officials, and maintain a level of decorum mandated by the league.

Usage example: From Truehoop: "A month after he shut down the bidding and decided to keep the team, the NBA Board of Governors passed the "Mark Cuban Rule," meant to keep team owners off the bench, out of the huddle, and out of the referees' ears."

Word History: This term, and other variations (such as The Cuban Corollary), were coined simultaneously by various writers and bloggers after the act was passed in October of 2006. David Stern and the NBA Board of Governors decided that the act was necessary in part because Cuban had already accumulated $1,665,000 in fines through June, 2006. But more importantly, Cuban's behavior during the NBA Finals -- the league's brightest and most public stage -- was considered to be a major embarrassment.

[Hat Tip: Thanks to Henry Abbott for the reminder.] 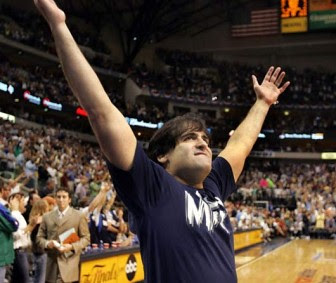 Thanks to the Mark Cuban Rule,
Mark Cuban can't do this anymore.

Anonymous said...
And the only owner fined under the rule...

Anonymous said...
Interestingly enough, it seems Michael Jordan is immune to this rule, as he essentially coached the Bobcats while sitting on the bench for their entire series this year in the playoffs.
4/28/2010 11:30 AM
Post a Comment
<< Home
Subscribe
RSS Feed
Mailing List

Word of the Day
Previous Posts
Kobe's 65? What about Nash's 64?
Old-school Celtics commercial
Word of the Day: un-emulate-able
Your Weekend Treat
The Noah Dance
Nature's Freak
Pickup Basketball Nicknames
Greg Ostertag sucks at ping pong too
Scoop Jackson is nuts (Ewing is not better than Ro...
Best NBA on NBC intro ever