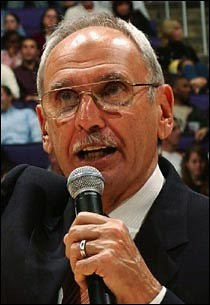 Lawler's Law (lah-lurz lah) noun. The popular belief that the first team to score 100 points will win the game.

Usage example: The Golden State Warriors were the first team to 100 last night, and they won. Of course, it helped that the Pistons scored only 93 points...

Word History: The term was coined by Ralph Lawler, the longtime radio and television broadcaster who has been the "Voice of the Clippers" for over 27 years (including over 1,600 consecutive games). According to his Wikipedia site: "In games involving the Clippers since 1978, Lawler's Law has been true 91.5% of the time." This isn't too surprising, considering how awful the Clippers have been over the years. If Lawler's Law stated that "the first team to score 60 points will win," it still would have been right about 85 percent of the time.

Anonymous said...
This is so fucking stupid I can't stand it.

Whoever scores 100 first is likely to be leading very near the end of the game. As such, this team will likely win.

Anonymous said...
...exactly, slow your roll Chico. It's just a "cheeky" guideline, not a REAL law. Unfortunately "Lawler's guideline" doesn't sound as cool, yeah? Don't forget, with teams that don't play much defense and/or score a lot (e.g. Golden St., Phoenix, etc.), there are entire games decided AFTER the 100-point mark with scores in the 1-teens and 1-twenties.
12/22/2009 11:48 PM

Word of the Day
Previous Posts
Artest snaps. Again.
Boy impersonates Dwyane Wade
Shaq to help fat kids stop being so damn fat
OSU's new uniforms are Lebron-tastic!!
Girl impersonates Brad Miller
Newsflash: It's always been about the individual
Shawn Bradley: Where are they now?
Save the date: March 10th is Adam Morrison Bobbleh...
Our unathletic President
Worst of the Night: Minnesota Timberwolves