Tuesday, February 27, 2007
It's official: Eddy Curry is better than Shaq
By Basketbawful at 9:12 AM
2 comments

Let me state up front that I hate Eddy Curry. I had to watch that shambling pork monster sleepwalk his way through four seasons with the Bulls, and it made me throw up i my mouth pretty much on a daily basis. Curry's seasonal pattern never varied: come in to training camp fat, pout because of the inevitable fat-related criticism, sloooooooooooooooowly work himself from "round" to "vaguely person-shaped," then play strong for the last 10-15 games, thereby inspiring hope in the fans that maybe, just maybe, next season would be his break-out year.

When the Bulls' GM John Paxson found out that Curry had a heart condition, I knew he'd found the excuse he needed to dump the underachieving big man that some people called "Baby Shaq." Curry's talent may have been hidden beneath undulating rolls of sweaty man-flesh, but it was never questioned. What was questioned was his agressiveness, work ethic, and heart. I mean, here's a guy who's 6'11" and 285 pounds...with a career average of 5.4 rebounds per game. The effort and desire just weren't there.

After the Bulls shipped him to New York, I wanted him to suck, and I wasn't disappointed. Despite being the Knicks showcase offensive option, his scoring dropped from 16.1 PPG to 13.6. Morever, he had only 19 assists and mind-boggling 179 turnovers. The conclusion was definitive: Curry wasn't and would never be the real deal.

Then something changed this season. The Knicks were still losing a lot of games, but I began to notice something unfamiliar next to Curry's name in the box scores. Consistent scoring. Good shooting. Actual rebounds. It defied belief, and I figured he was just doing his patented "late-season hot streak" a little earlier this year so he could take the last half of the season off. But it hasn't happened yet...the dude is still playing well: 19.6 PPG on 59.3 percent shooting and 7.1 RPG. By the numbers, he's the best center in the Eastern Conference.

Of course, there are people who will continue to argue that Shaq is still the East's best center. But look at his numbers: 14.8 PPG, 6.7 RPG, and 39 games missed due to injury. As is always the case, Shaq is granted excuse after excuse. He's still playing himself into shape. He's saving himself for the playoffs. He can turn it on any time he wants. According to Deadspin, Shaq "decided to remind us of what he used to look like when he was MVP material" in the Heat's 86-81 win over the Cavaliers. Uhm...what?! Shaq had 19 and 11. That's a good game, but not remotely MVP-like. During his MVP season of 1999-00, Shaq averaged 29.7 PPG, 13.6 RPG, and 3.2 BPG (yes, he actually played defense back then). And those numbers barely begin the describe how utterly dominating he was back then. There was, literally, no way to stop Shaq in his prime. Now everybody gets excited when he drops 20 and 10. Talk about lowered expectations.

Does anyone think Shaq looked like an MVP last night? Not only did Eddy Curry outscore (28 to 20) and outrebound (11 to 3) him, the Knicks won 99-93. What does this mean? Well, the Knicks are now only two games behind the Heat for the 8th seed in the Eastern Conference. Last night's victory means that the Knicks won the season series 3-1 and therefore own the tiebreaker. In other words, the Knicks stand a very strong chance of knocking the defending champs out of the playoffs.

Back in 2001, Shaq swore he'd retire before he was "only as good" as David Robinson (which is pretty easy to say when you're in your prime and the reigning champ/MVP/Finals MVP). Mind you, The Admiral was getting 14.4 PPG and 8.6 RPG at the time...numbers that are eerily similar to Shaq's stats for this season. And aside from the rebounding edge, Robinson also averaged 2.5 BPG, so he was still a major defensive presence. Unlike Shaq.

I'm not trying to sell Shaq short. He's still one of the top centers in the league. But that's all he is. We will never, ever, ever get to see Shaq dominate a game the way he used to. He still has some good games in him, and we'll occassionally fool ourselves into thinking we're seeing a "vintage" Shaq performance. The same thing happens with all great players. Remember when David Robinson ended his career? It was game 6 of the 2003 NBA Finals. Robinson scored 13 points and grabbed 17 rebounds, and after the game experts and analysts called it a "vintage" game for The Admiral. But...this was a former MVP who had led the league in scoring and once scored 71 points in a game. It was a fantastic game, to be sure, but was it really a vintage performance? No, not really.

The bottom line is this: Shaq's time has passed. He can no longer totally dominate a game or carry a team. He is very good, but not great. And if I had to start a team today, I'd probably take Eddy Curry over The Diesel. 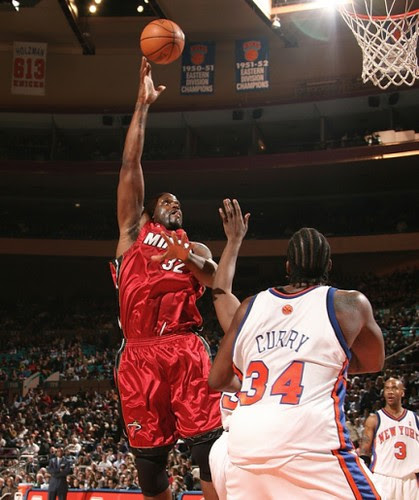 Shaq's 25,000th point may be the last time
he ever outshines Eddy Curry. Seriously.

I agree, it kills me when people are calling what's in essence a double-double as dominant. What wasn't mentioned was that Ilgauskas was an emotional wreck after his wife went into pre-term labor and delivered stillborn twins. Z just didn't want to be there. Hardly MVP-like.

"And if I had to start a team today, I'd probably take Eddy Curry over The Diesel."

Now that's a bold statement! As good as Curry's been lately he still has zero passing ability and his defense is a joke. Shaq still knows how to find the open man when double-teamed. Even though Shaq will never play more than 45 games a season for the rest of his career, I can't see Curry maintaining his current level of play... therefore (as much as I hate to say this) I'd still take the Big Fake Injury over Curry.
2/28/2007 12:19 AM

Basketbawful said...
You're exactly right about Z. Not only that, I watched the game. Shaq's numbers were just numbers. He never controlled the game at any point. And, typically, he was 1-7 from the line.

I'd take Curry because he's only 23 and, unless he dies of a heart attack, has several more productive years left. Shaq has this year (and he'll only have played half the season) and maybe next year before he's completely useless. Now, you're absolutely right that Curry is a horrific passer...I just think he has more upside in the next few years than Shaq.
2/28/2007 8:50 AM
Post a Comment
<< Home
Subscribe
RSS Feed
Mailing List