Waltonism (wolt'-un-iz'-um) noun. Relating to or characteristic of comments made by former NBA MVP and current ESPN television analyst Bill Walton. Typically, these are grandiose non sequiturs about a specific player, a particular team, or a team's entire fanbase. Always overstated (often bordering on ludicrous) and sometimes marked by transparent irony, these statements usually take the form of either A) a superlative compliment or B) a hyperderogatory criticism.

Usage example: When my buddy said he thought Lebron James was " the greatest player in every known universe," I accused him of making a Waltonism.

Word Usage: The opinions about Bill Walton and his "highly individualistic" brand commentary are bitterly divided. Regarding the subject of Waltonisms, some have said "he's the biggest douchebag doing color sports commentary on TV," while others think "Bill Walton is absolutely hillarious." Personally, I think that, early in his broadcasting career, Bill's analysis came off as goofy, bumbling, and irrelevant. However, I think he's improved to the point where his color commentary mirrors how people feel about him: half the time he's a douchebag, half the time he's funny, poignant, and (almost) endearing.

Creating your own Waltonism is easy. Simply use the following formula: [Insert Player/Team/Fanbase Name] is [Insert Action -- preferably basketball related] [Insert Superlative or Hypernegative Description]. It's that easy! Remember: the more bizarre, the better. Here are some real life examples to get you started.


"Tracy McGrady is doing things we've never seen from anybody -- from any planet!"

"Patrick Ewing used to be better in every aspect of the game."

"John Stockton is one of the true marvels, not just of basketball, or in America, but in the history of Western Civilization!"

"This crucial game five brings to mind two great movies. The first is Gladiator, in which Maximus attempts to rally his troops to come together. They learn that the only way to win is to fight as one. The other is Traffic, in which we learn that the greatest battle of all is that which is fought within one's own mind."

"Tony Parker just made the worst pass in the history of Western Civilization."

"That was the worst execution of the fast break in the history of the Trail Blazer franchise."

"What a pathetic play from a pathetic human being." (About Larry Johnson.)

"Shaq makes everyone else in the league look like Michel Tafoya." 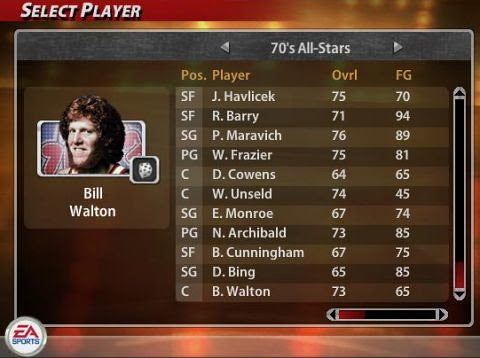 According to Henry, this picture of Bill (circa the late 70s) "looks like he has just poked his face out of a bear's ass." With all due respect to Henry, we're not so sure about this. Personally, we've never seen someone poke their head out of a bear's ass. But we have seen a sasquatch. And this, clearly, is a picture of one. Just import the image into Photoshop and enlarge it, and you'll see a zipper running down the middle of its face. But whatever the case, I can quite honestly say that is the worst beard...in the history of Western Civilization.

*In this case, the term "loyal reader" simply means he hasn't called us a fag. Yet.
7 Comments:

Statbuster said...
"More Americans get their basketball news from Basketbawful than any other nationality."
8/16/2006 6:30 PM

Anonymous said...
The best thing about Walton is impersonating him to your buddies during the game. The formula is almost the exact same as the one you listed for Waltonisms but you must add a hippie type reference. References to someone named Rainbow or Moonbeam livin in a tent Waltons the backyard are always appreciated.

Anonymous said...
Man,don't get me started.I've amassed so many Waltonism's over the years I've lost count,here's a good one:
'Basketball, is a celebration of life,and health.Chris Webber is just not healthy...'
6/22/2008 9:59 PM

Anonymous said...
Here is one..."scottie pippen was one of the 6 greatest defenders in league history" He then had trouble naming the 5 ahead of him. One more "You look at Vladimir Radmanovic, this guy is cut from stone. As if Michelangelo was reading and a lightening bolt flashed before him."
12/13/2008 9:27 PM