Apparently, the Boston Celtics are in the process of holding auditions for the first ever Celtics Dancers. I find it depressing that the once great Boston Celtics - the team that held my full and undivided attention for over a decade, the team that once boasted Larry Bird and later had a chance to retain him as GM - are now so off my radar that I didn't even know that they had not yet started up a cheerleading team. I guess somewhere in my subconscious, I assumed they had already done it in a pathetic effort to divert attention from the utter lack of talent on the court...

...but now it's official. Mark this as the moment that the Celtics have

jumped the shark (as if there haven't already been plenty of moments prior to this). By creating a cheerleading team, Resident Genius Danny Ainge and other execs have officially decided that they don't have enough boobs in the organization. If Red Auerbach had any real power left, he would crush those responsible. Nowadays, however, all he can do is wait in earnest for death, so that he might begin rolling over in his grave.

Oh well, at least it gives us an excuse to look at hot babes in skimpy cutoffs dancing in front of decades-old Celtics Championship banners. 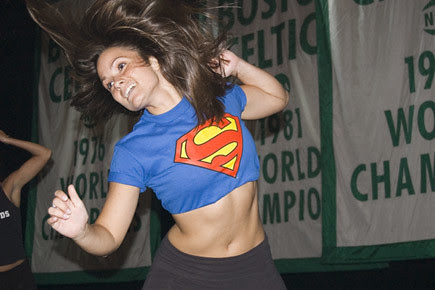 Need to rekindle your interest in
sex, Superman, and the Boston Celtics? Voila.
4 Comments:

Failing to see the problem

[Looks at picture some more]

Still not seeing the problem

[Stares at picture with nose about 1cm from the screen]

At this point, you could tell me what the problem was and I STILL wouldn't see your side of it.

I mean hey, don't get me wrong, if all you want to see are sweaty guys in shorts and tank-tops running around after a ball without any female eye-candy, well then, let your Freak Flag Fly.
7/11/2006 9:30 AM

Anonymous said...
Dammit man, how dare you think I would ever bemoan the prancing around of these scantily-clad women. I checked out every picture of the tryouts on the Celtics site, and I recommend that you do as well.

It's just that I grew up watching a basketball team of such magnificent purity, that it is difficult to watch that team mutate into a shadow of their former selves and a carbon copy of every other gimmick in the league.

Besides, I can get just as aroused watching a bunch of "sweaty guys in shorts and tank-tops," as you put it, WIN A CHAMPIONSHIP as I can watching hot, half-naked girls dance.

Crap, did that sound as gay I think it did?

Statbuster said...
Nice to see the Celts jump head first into the 20th century. If someone could just have this same conversation with the Jazz.

Todd L said...
If Red Auerbach had any real power left, he would crush those responsible. Nowadays, however, all he can do is wait in earnest for death, so that he might begin rolling over in his grave.

Word of the Day
Previous Posts
Man sues Michael Jordan for looking like him
All you need to know about this year's draft
The most dangerous sport in America
Friends don't let friends drink, jerk it, and drive
NBA Live: Bird vs. Nowitzki
White and Blonde
Word of the Day: White Boy Hustle
Word of the Day: mullion
After game 5, is it just me? Or...
Idiot of the Day: Ben Roethlisberger