Monday, July 10, 2006
Man sues Michael Jordan for looking like him
By Basketbawful at 1:05 PM
6 comments

Just off the top of my head, I can think of about 37 justifiable lawsuits someone could file against a former NBA superstar. Some sample lawsuits include:

1. Dr. J for practicing Funkadelic Dunkology despite holding only an honory degree.

4. Kareem Abdul-Jabbar for being a whiney little bitch.

5. Larry Bird for being white (if he was black, he'd be just another "good guy").

But despite the fact that several hoop legends have committed legitimate crimes against humanity, some idiot has filed the most indefensible lawsuit of all time. Portland resident Allen Heckard is suing basketball superstar Michael Jordan and Nike founder Phil Knight for bags and bags of free money. Why? Well, Heckard says he's been mistaken as Michael Jordan nearly every day over the past 15 years...and he's tired of it.

And if the "people accuse me of playing like Jordan" part didn't make you spit out your drink and say "Yeah, right!", then just keep reading. 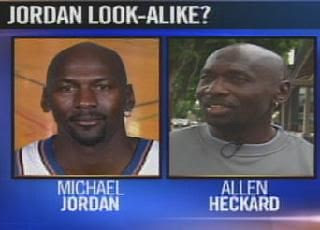 What He Wants: A paltry sum of (prepare to hold a pinky finger up to your mouth)...$832 million dollars! That's $416-million each from Jordan and Knight, by the way. If you're wondering how Heckard calculated this astronomical amount, it goes like this: "Well, you figure with my age and you multiply that times seven and, ah, then I turn around and, ah, I figure that's what it all boils down to." I'm not nearly smart enough to argue with that math.

Why He's Fucking Nuts: Due to some amazing genetic fluke, Heckard "looks like" Michael Jordan. Which essentially means he's black and, after shaving his head, he's black and bald. Just like Mike! Here's the thing, though. I'm white. If I went out and shaved my head, I wouldn't suddenly look like Bruce Willis or Captain Jean-Luc Pickard. That's just crazy.

But forget about all that. Let's assume he's physically identical to Jordan. So...what? Maybe I just can't imagine the pain and anguish of people accidentally thinking I'm a godlike athlete with incalcuable wealth and the adoration of billions of people, but I can't help but feel that that Heckard is totally full of shit. How can that possibly ruin your life? At the very least he should have been able to translate his vague resemblence to Jordan into sex with hoards of hot babes. And if that's true, he has no case. And if it isn't true, he's too stupid to deserve all that money. He should be in a special home where they make you wear adult diapers and put you to bed by 7 p.m.

In all his frenzied litigation, Heckard hasn't explain exactly what Jordan and Knight have done wrong. He's basically suing Jordan for just being himself, and Knight for cashing in on it all. How were they supposed to avoid that? You know, I'd be in the NBA right now if all the people who are more talented than I am weren't playing basketball. Can I sue them for ruining what would have been a multi-million dollar lifestyle? If so, where are the papers...I'm ready to sign!

I can only hope this case gets dismissed immediately. If it isn't, then you'd probably better start stocking up on bottled water and shotguns, because the dark apocolypse has officially begun. Since he's very clearly an idiot, it's hard to tell whether Heckard is serious about this lawsuit -- we are in the American Idol age, after all, and he could just be trying to get a little television exposure. But when asked whether he thought the lawsuit, and the money he's asking for, is reasonable, Heckard simply said, "Well, You never can put a value on a person's life. You know you're taking my lifestyle away from me. So you know...we'll let the ball bounce like Michael does...where it's supposed to fall."

Update: In an unexpected surprise, Heckard dropped the lawsuit. Which either means he's not as stupid as I thought, or he's stupider. You be the judge.

Anonymous said...
"So you know...we'll let the ball bounce like Michael does...where it's supposed to fall."

Statbuster said...
I think he's saying that Michael fell, and was supposed to fall in a certain spot...this case is probably being litigated in Washington!
7/11/2006 10:36 PM