I've always had a lot of respect for Charles Barkley. During his playing days, he was an absolutely fearless competitor who never backed down from anybody. I mean, he once led the league in rebounding despite being listed at a mere 6'5" (and if he's actually any taller than 6'3", I'd be very surprised). The guy even went toe-to-toe with Shaq once...and not only did he live to tell the tale, he took the big fella down. (The best part was Barkley's post-fight commentary: "My grandma always taught me to fight back. She would have done the very same thing, and probably kicked his ass.")

Barkley carried that same "pull no punches" attitude into the announcing booth. It was like a breath of fresh air. Finally someone who didn't kiss ass and try to avoid saying anything even remotely controversial. I even dubbed him the "

Round Mound of Retort" in tribute to his knack for telling it like it is, regardless of the subject matter or people involved. Yeah, he's gotten a fat, and even a little lazy in his commentary, but he doesn't mince words, doesn't hold back, and he says what other people don't have the guts to say. He even threatens to beat up his co-anchors, Kenny Smith and Ernie Johnson. Now that's entertainment.

But Barkley let me down last night. Big time.

It was supposed to be a showdown between Sir Charles and Kobe Bryant, over comments Barkley made after Kobe threw in the towel halfway through the Lakers' Game 7 loss to the Suns. Chuck called Kobe selfish, Kobe responded with several expletive-filled text messages (which Barkley gleefully referenced on the air), and so TNT decided to bring Kobe in to be questioned and then tell his side of the story.

Everybody was expecting a showdown. What they got wasn't worth the five minutes it took to watch. Barkley explained (again) why he called Kobe selfish, and then apologized (?!) for making Kobe's text messages public knowledge. Kobe then responded with his lame "I was just sticking to the game plan" excuse, and that was it. No rebuttle, no point/counterpoint, no closing statements by both sides. Charles threw in a quick question about Kobe's upcoming number change right before they went to commercial, and then -- just like that -- it was over.

I still can't believe it. The "game plan" excuse doesn't hold any weight with me, and it shouldn't hold weight with anybody else, either. Kobe quit that night, plain and simple. Phil Jackson wanted to pound the ball inside, get other guys going, fine. That's one thing. But Kobe stood at the top of the key, passing off to teammates and emphatically pointing at them as if to say, "No, you do it. I'm done." He didn't drive to the hoop to create shots for his teammates. He didn't crash the boards. He didn't lock anyone down on defense. I have the game saved on TiVo, and I will sit down with anyone who disagrees and ask them to explain why Kobe spends the second half standing outside the three-point line just watching. Watching. Not participating in the triangle. Not setting up his teammates. Just...watching.

Charles should have asked the same thing. Great players don't have to score to be effective. There were times Larry Bird had to pull back and let McHale, Parish, and Cedric Maxwell carry the scoring load. But he didn't just stand there twiddling his thumbs. He got involved. He hit the boards with a vengence. He created. Kobe has as much natural talent as anyone who has ever played, and he's honed his skills to a level that amazes even me, his harshest critic. But there is no way to defend his inactivity in the second half of that game. He didn't need to take 20 shots that half. He could have contributed in countless other ways. That, more than anything else, is why what he did was selfish and self-serving.

I don't know what kind of voodoo mind control they used to shut Charles up. When the segment began, you could practically see Barkley quivering with anticipation. So what happened? Was he given orders not to aggressively question Kobe? Was he intimidated by Bryant? It doesn't make any sense. Being so passive, even apologizing, that isn't Barkley's style. Never has been. But it was last night. And as a result, he left a lot of people shocked and let down. I wish I knew why. I doubt we'll get any better of an answer to that question than we got about Kobe's disappearing act against the Suns. 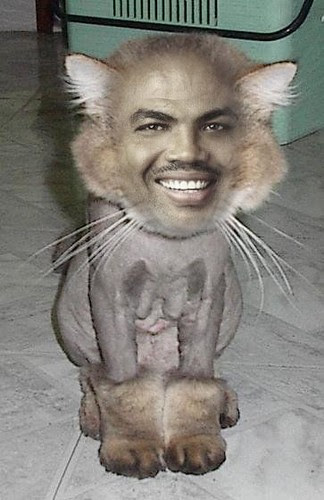 Anonymous said...
This is the big leagues of television and ratings. No doubt to get Kobe on the show, they had to agree in advance to all kinds of crap, written up by Kobee's dozens of lawyers. Barkley has been losing a bit too much at the tables to be telling ESPN to take a flying leap just yet, so he had to take a bit fat slice of that humble pie and eat it.

That said, I agree with Sir Cumference, Kobie didn't play in the second half, he just gave up. You know it, I know it Kobe knows it and everyone with 1/2 a brain knows it. Quobe is changing numbers because what kid wants to be seen seen wearing Quitter #8 anymore?
5/18/2006 6:31 PM

Anonymous said...
I think Barkley was distracted by the sweater-vest. He couldn't very well attack somebody who was dressed like the captain of his high school chess club!

Anonymous said...
So what's Barkley supposed to do, jump the desk and beat the shit out of Kobe? (Though I'm sure 90% of NBA fans were praying for that.)

Look, the guys spend the entire night in the green room watching the games, drinking beer and being jockular. Barkley took the nice approach knowing that he'll be spending the next 4 hours with him.

If they wanted to grill Kobe properly, they should have broken out game film and asked, "What are you doing here?" over and over again. I'd have no problem with that.

I was expecting a NICE confrontation between Barkley and Kobe. What I also expected was Kenny Smith to pull out the difficult questions. He's more direct whenever a player comes on the show.

The confidence came out when explaining that dropping 20 in a quarter can demoralize some teams, but not all teams like Phoenix. He wasn't saying, "If I can get 20" but rather "when I get 20", as though it’s a nightly offensive option for the Lakers. Most guys on TNT spew the clichés and deflect any self-analysis. It's a lot better that seeing Magic "analyze" a game. (If blabbing endlessly and killing conversation in the studio is analyzing.)

The best part was seeing both Kobe’s and Chuck’s faces just prior to the “EJ’s Stat of the Night” bit with the text messaging. They both looked “intrigued” thinking that is was the real text from a few days ago. (Kobe probably had the same face when blaming Shaq in Colorado.)

jenny said...
GO MAVS. I appreciate your blogging. Excellent. I hate Duncan with a passion and this Terry stuff is CRAP. He's my favorite player and I'm quite pissed.
5/18/2006 9:54 PM

Anonymous said...
i too was disappointed with the showdown. i wasn't expecting or hoping for violence but at least some real exchange. kobe says i stuck to the game plan in the 2nd half. ok. it looks like you're standing around the 3pt line. not rebounding. not playing much defense. that's quite a game plan.
i would have been really nice to show some clips of the game while he was there.
it's not simply that he took 3 shots in the second half. the number of shots is kind of irrelevant. it's more that he didn't do much of anything. he always talks about how he does whatever the team needs, whether scoring points, defending or whatever. why didn't he turn into the supposed all-defensive player that he is and switch to barbosa and shut him down? why didn't he get in position for rebounds? he passed the ball around the 3pt line and stood there.
5/19/2006 11:05 AM

Word of the Day
Previous Posts
Smother Chicken!!!
Dirk's secret inspiration
A few words on Robert Horry as an Intangible Man
Muwahahahaha!! (or "Sheed gets his pie hole shut")
Word of the Day: Intangible Man
Pat Burke delivers the Human Victory Shot
A picture is worth a thousand sodomizations
Memo to Juwan Howard: Put down the sunglasses and ...
Word of the Day: gamesmanshit
Yet another bitter Pacers fan rant...