Phil Jackson is an asshole. Almost every time he opens his mouth, it's like little, wailing demons come pouring out. He always has something caustic to say, whether its about the officiating in a particular game, an opposing team, another coach, or even an entire city. I mean, he once made a video that compared Rick Adelman to Adolph Hitler. Adolph freaking Hitler! What's more, he even wrote a book devoted to trashing his team and its star player. Which is pretty funny, considering he's the same guy who once said "Always keep an open mind and a compassionate heart." I guess that "compassionate heart" thing doesn't apply to Los Angeles Times columnist T.J. Simers.

I don't know what the history is between these two guys. Maybe they've been involved in some kind of secret feud. Maybe T.J. had an affair with Phil's

Native American headdress. I don't know. But in one recent exchange, Phil accused Simers of wife-beatery:

Simers: "I just marvel at the way you've developed young players, so what can you do with Kwame Brown? Most people in town don't think Brown is going to amount to anything. Do you agree or disagree?"

Jackson: "I'm not going to answer that question. Agree or disagree, when did you stop beating your wife? It's a situation where a guy has to find some successful experiences to build on, and that's where we are."

Jesus, Phil! Somebody asks a legitimate question about player development and you respond by asking if he thugs his wife. That seems like a bit of an overreaction, don't you think? Simers, like most of the free world, thinks Kobe Bryant should let Lamar Odom take a couple shots a game. After hearing Phil say sort of the same thing, Simers noted it...and got blasted.

Simers: "Have you come around and started thinking like me now -- getting more points out of Lamar Odom?"

Jackson: "I hope I never have to think like you. For sure, my relationship [with Jeanie Buss] would end quickly, I wouldn't have any friends and I'd be alone in this world."

Wow. That, my friends, is superdickery. 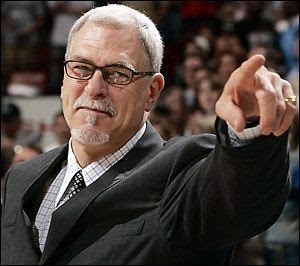 Anonymous said...
Don't know if you live in L.A. or read the Times regularly, but pretty much every professional sports team here hates TJ Simers. His whole existence is based on writing a-hole columns and ripping any and everyone who plays for a local team.

Anonymous said...
Whatever the relative faults of Simers or Jackson, I'm pretty sure the "wife" remark was another version of classic hypothetical begging-the-point question, "Have you stopped beating your wife yet?"

So all Jackson was really saying was Simers' question implied that everyone knows Brown sucked (which we do), and Jackson thought that having to validate that assertion by answering was unfair. I don't think he was actually accusing Simers of beating his wife, or taking a shot at him personally at all.
2/28/2006 12:05 AM
Post a Comment
<< Home
Subscribe
RSS Feed
Mailing List