The 1985-86 Celtics won 67 games and captured the NBA Championship with one of the strongest teams in league history. But despite a 59-win campaign and another trip to the finals, the 1986-87 Celtics failed to repeat. Analysts at the time disagreed as to why this happened. Some people blamed Kevin McHale's broken foot, while others thought it was the voodoo curse that Mychal Thompson put on the team. But looking back, the reason is painfully, almost tragically clear: the team had the worst bench of all time.

Table THX-1138: The 1986-87 Boston Celtics
Team Totals and Starters vs Bench statistics
Those numbers are real, my friends. The Celtics got a pathetic 12 PPG, 6 RPG, and 4 APG total from their bench that season. Ideally, you should get that kind of production from your sixth man alone. Divide those numbers up among your three to four-man bench rotation, and, well, they suck. Even worse, the starters averaged between 37 and 42 minutes of game, which means they were usually exhausted by the end of the game (as evidenced by the fact that they kicked away 4th quarter leads in 6 of their 10 playoff losses). 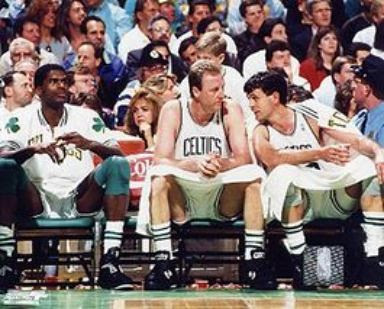 Dudes, our bench sucks. I mean, it really sucks.
To put this into better perspective for you, when McHale won the Sixth Man Award for the 1984-85 season, he averaged 19.8 PPG and 9.0 RPG. So, statistically speaking, he far outperformed the '87 by himself. Ouch.