I decided to give myself a healthy head start before putting down any predictions. A few series have already been decided, but it seems most of them are 3-2 at this point. Who's going to beat the odds and win a series they are trailing in? No NBA team has ever won a series after trailing 0-3? Do the Celtics or the Rockets have a shot? Let's pretend to find out.

Bucks vs. Heat: Call me crazy but I'm gonna go with Bucks in 6.

Hawks vs. Pacers: I never expected this one to last as long as it has. I know that Atlanta has a lot of talent. We've been able to see what Josh Smith and Al Horford can do for several years now. For all of Kyle Korver's 'tickle-me-elmo' defensive tactics, we all know he can hit a three. Jeff Teague is getting too good to ignore. They're a capable team. Yet somehow they don't seem to be going anywhere, unlike their opponent.

These Pacers can be a maddening team to watch. At times they look like a legitimate contender. Then they'll go cold as a day old fish for a game or two. Roy Hibbert seems to personify this. If it was just Paul George, Roy Hibbert, George Hill, Lance Stephenson, the Hansbros, and Gerald Green, being counted on to get the job done, I might say the Hawks could pull it off. But there's David West out there, and in an insane, volatile world, that's enough.

Nets vs. Bulls: Will lightning strike twice? Can the Chicago Bulls count on Nate Robinson doing this again?


If the Bulls were relying on Nate Robinson to score 23 in a quarter again, I'd say the Nets were about to win twice in a row. Luckily for Chicago, that's not the case. The Bulls are however putting a dangerous amount of weight on Little Big Man's shoulders. How much is too much?

I think we can refer to game 3 for that. Robinson did not look ready to lead the Bulls in minutes while trying to slow down Deron Williams. Nate had a nice offensive game, 20 points and 8 assists, but Deron had a nicer one and the Nets cruised to victory.

For tonight's game, Hinrich is still listed as doubtful, while both Deng and Gibson are questionable with illness. I suspect the latter two will play; and even if Hinrich is absent, I expect Thibs will make an adjustment so Deron has somebody bigger on him.

Bottom line: The Nets may be able to put more talent on the floor (they do have Andray Blatche afterall), but the Bulls seem to know what they're doing and who they are. As the Lakers have shown, talent isn't always enough, especially when your opponent has an identity. I'll take the Bulls in 6 ...or will I?

Celtics vs. Knicks: If teams coming back from a 3 game hole wasn't such a rare occurrence, then a team in the NBA would've done it by now. In baseball, the Boston Red Sox in 2004 famously became the first MLB team to do it, against the Yankees of course. But that was about a century in the making and had the whole 'curse of the Bambino' weight behind it. The Yankees had been destroying the dreams of the Red Sox since World War 1, what could the Knicks possibly have done to build up such bad karma? 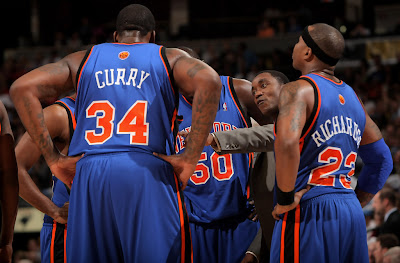 I'll take the Celtics in 7.

(Although this really messes with my Knicks over the Grizzlies in 7 games NBA Finals).

Lakers vs. Spurs: I'm gonna go out on a limb and say Spurs in 4.

Rockets vs. OKC: The Thunder win ...eventually. Kevin Durant is averaging 34 points, 8 rebounds, and 6 assists in this series. It doesn't feel like he's about to stop doing that. Team chemistry is a fragile thing and Westbrook's loss has the Thunder searching for an identity, but count on Durant's brilliance to guide the ship into the 2nd round.

But if not... It's Tracy McGrady's fault somehow.

Now it's getting interesting again. The Warriors are up 3-2, but the Nuggets are showing signs of life. My prediction is that the series finally conforms to the initial odds, but in a way that's a long shot, with the Nuggets winning 2 in a row.

In the beginning of the series, the Nuggets felt like they were adjusting to injuries. Now the Warriors got the shit end of that particular stick, with Curry and his ankle coming back to earth, and Jarrett Jack nursing a sprained ankle of his own. Those two have been great in victories, but it's unclear if they'll be able to sustain it. Meanwhile, the Nuggets are getting back to their game and attacking the paint. Early on in the series they seemed content to be lured into a game of small ball; if they're over that, they got a real chance to win this series.

Grizzlies vs. Clippers: Will the Staples Center see the 2nd round this year? My vote is no. This series was evenly matched to begin with, perhaps as much as any first round series. With Blake hobbled and the Grizzlies gelling, the task seems too tall for the Clippers.

There were moments this season when everything was working for the Clippers and they played some beautiful basketball. The lobs were flowing, steals were a'plenty, and Jamal Crawford ended any lull in scoring with his theatricality. As the season wore on, the frequency of these moments diminished somewhat, and I don't see it magically rushing back at once for the final two games. That is, if the Clippers' season has more than one game left...

It's a shame that either one of these teams must get bounced in the first round, but it does make the West more interesting for the Grizzlies to advance. I'm skeptical that even a healthy Clippers squad could have made it past the Spurs, whereas the Grizzlies have shown they match up with them well.

Even Chris Paul's, otherwise impressive, box-score from Game 5 can be seen as a gloomy harbinger. 35 points, 6 rebounds, and 4 assists on 11 of 24 shooting. It's as if he's reaching beyond the playoff grave to put up the numbers Kobe never got to. Probably not a good sign. Grizzlies in 6.

senormedia said...
Celtics have broken the will of the Knicks. A victory at home and by game 7 the Knicks will be so tight and have the yips so badly that they may go the whole 1st quarter without making a shot.

Wormboy said...
Note at 0:18 that Robinson got Jalened/Bowened. The league should stop being such wussies and deliver a freakin 1 game suspension every time that happens. I don't care whether it's an accident or not.

Then there's Wallace doing an "accidental" belly flop on Robinson at 1:08.

Robinson gets Jalened/Bowened by Lopez at 2:09

I wasn't exactly a fan of Abbott's recent screed about protecting Steph Curry, mainly because the fouls were too hard to designate at intentional. But certainly the first Jalening in this clip deserves a suspension? Remember, we have a league that will suspend Amar''''e Stoudemire for walking 5 feet onto the court, at the other end from the action, in game 5 of the WCF when Steve Nash gets abliterated by Robert Horry. Surely we can protect players from this kind of BS?

Wait, that would be expecting Stern to be less of a psycho asshole.

I'd love for the Bulls to win, but the deck was stacked against them too many ways this season, and too many injuries/illnesses now. Just can't happen. Nets win (ugh, I just gagged).

As for series, no way the Celtics win this, even though I'd love to see Melo knocked out of the first round yet again. The Knicks simply have too many pieces. OK, the Celts get some throwback games from pierce and Garnett, plus some role players having unusually big nights. They can't string that together that many games in a row. Too old! Knicks win.

Indiana will beat Atlanta, but GOD DAMN Roy Hibbert annoys the hell out of me. He's one of those guys who does just enough to get by. Can you say "Contract Year Phenomenon?

As for Clips-Griz, I agree that a healthy Clips win this. But Griffin looks lamed, and even Paul hurt his thumb. Paul isn't pure scorer; he makes other guys better. So Paul alone can't win this, because he needs guys to finish. Grizz win, necessitating my annual Jeremiah Johnson film allusion, wherein I assert that you are not a man if you haven't seen Jeremiah Johnson.

OKC will beat Houston, because Houston really isn't that great, while OKC has the league's 2nd best player. Oh, and Derek Fisher will draw a couple of ridiculous fouls per ga,e. I'm, currently thinking that is the sole reason Fish is still in the league; he is the best flopper still active.

That said, OKC is no longer a contender. Take that, Bennett and Presti. The ghost of teh Sonics made you trade Harden, and you assholes are going to lose because you did it. Always go for the championship soon rather than the sustained dominance long term. had they kept Harden, OKC would have won a ring in the next 4 years. Now, who knows?