Our log cabin is a plain 12-by-12 box with bunk beds and a booth-style table, but it feels like pure luxury compared to an evening in a tent. There’s a nice pool within a short walk’s distance, and a pleasant old couple that serves a hearty breakfast of pancakes, sausage, bacon, and biscuits for a few bucks a head every single morning in a giant tent on a nearby hill.

Or at least I think it is until I start searching for an outlet to plug in my computer. I wander to another cabin, where a portly fellow is grilling steaks.

“Excuse me,” I say. “Did you find the outlet in your cabin?”

His face wrinkles. “Well, there’s one for the refrigerator,” he says, and thinks, “and there’s one in the bathroom.”

I’m confused. I look at his cabin. It appears identical to mine from the outside. 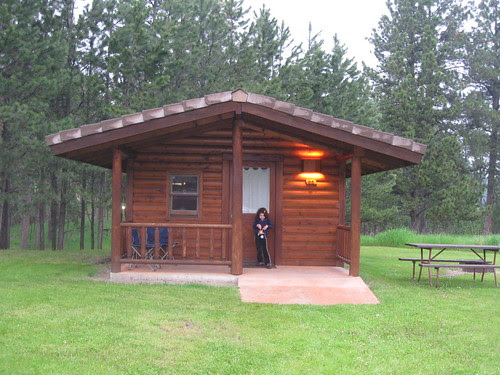 I think back to the initial cursory review of my cabin. I find it hard to believe I could have missed a bathroom. I actually wonder for a moment if there’s a trap door in the floor that leads to the mysterious fridge, the bathroom, and the Ark of the Covenant.

“Yup,” the man says, without a hint of I’m-better-than-you arrogance. “Fridge, bathroom.”

I’m waiting for him to add: and there’s a billiard table. It’s next to the vending machine and across from the linen closet.

I mope back to my fridge-less, bathroom-less cabin, and finally locate my outlet behind an indoor shutter near the front window. Stringing my computer cord under the sliding window screen gives me the juice I need to watch my bootlegged, low-definition .avi file of the 1994 movie Stargate. 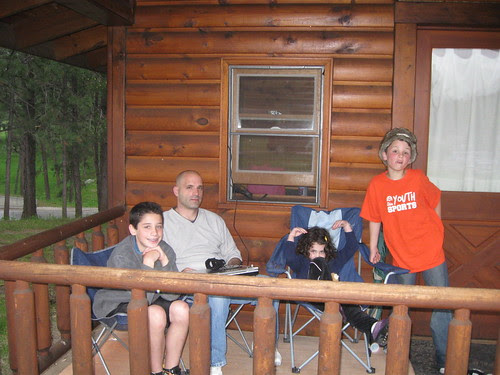 Kurt Russell and James Spader are good in that movie, but Jaye Davidson’s performance has always been the most haunting to me, perhaps because I keep waiting for him to expose himself like he did in the movie The Crying Game two years previous. 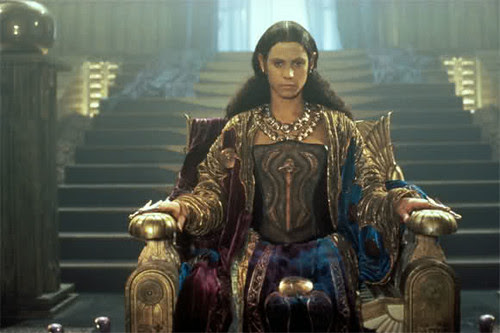 So the cabin leaves something to be desired, if only because of my childish, unreasonable expectations. However, this is more than offset by the fully-functional 20-inch color TV in a large room next to the administrative office that appears to be used as a makeshift cafeteria when it’s raining. But it’s not raining, so the room is empty, even during Game 3 of the NBA Finals. A family of Celtics fans appears now and again, but they seem more interested in the swimming pool than the game. So most of the time, it’s just me and Devlin in the big empty room, bonding over a classic Celtics-Lakers battle.

Right about halftime, with the Lakers leading 52-40, a local news report cuts into the ABC broadcast. A disheveled anchorman with a day’s growth of beard appears on screen. “Good evening, I’m Toby Dorman for South Dakota Action News,” he says. “There have been widespread reports outside Hill City of hordes of the undead wandering the streets.”

Devlin looks at me, his eyes like discs. “Aren’t we right near Hill City?” he says.
I nod.

“This group of undead is reported to be ravenous, contagious, and faster than your typical zombie,” the anchor says. “Not 28 Days Later fast, but fleet-footed nonetheless.”

I take Devlin’s arm and pull him away from the TV. “We need to get back to the cabin and warn your mother about-”

We freeze at the sight of Shannon in the doorway. Her eyes are shot, her skin is ashen, and blood oozes from her nose and flaking lips.

“That Mom’s a zombie?” Devlin says.

“No,” I say. “That those guys would mess with my story like this.” 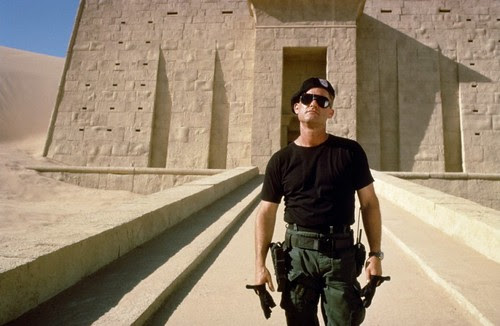 "You don't need to see my man bits to know I got 'em...
So I hear you're having a little zombie trouble?"

JJ said...
This is why you always have to be prepared for a zombie apocalypse. ALWAYS.

This is not a complete guide, but it's a starting point for the clueless people.

Jabari said...
Not related to this (sorry), but probably falls into the "Basketbawful" category:

We have a group that plays pick-up ball on Tuesday nights. In Phoenix.

AnacondaHL said...
I think it would make more impact to put the final score inline with the story's timeline, such that we are reminded of the outcome as Doug finishes watching the game, even in the middle of a post. For example, it would be shown before the 2:32 am timeskip in the laundry arc.

Then again, this entire story is this real/imaginary/nonlinear/4th wall adventure, I'm not even sure what the fuck anymore, except that it is highly enjoyable.
7/06/2011 12:27 PM

Wormboy said...
Wait, the love interest in The Crying Game is a DUDE?!?!

Anonymous said...
As a visitor on this planet, I have yet to master human emotions. So if someone could teach me how to be shocked, I'd be grateful, because this article is nothing but shocking.
7/06/2011 4:40 PM
Post a Comment
<< Home
Subscribe
RSS Feed
Mailing List