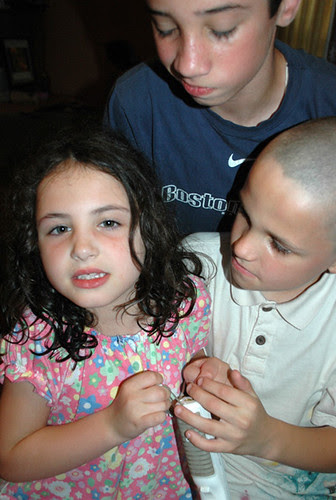 Next year from Nintendo: Wii Fight

I’m scanning the faces at our kitchen dinner table. All of them, except for the oblivious six-year-old, are fused in disappointment.

“How was I supposed to know Edwin would clothesline the kid?” I say.

“Two weeks,” Shannon says, disappointment oozing from her words. “It took you two weeks… and that was with only one practice and one game a week. So really, it was more like four days.”

Edwin, the nine-year-old whose team I’m now forbidden from coaching, asks to be excused. He hasn’t touched his chicken fingers, even though he loves chicken fingers. Shannon excuses him. I want to apologize, but I can’t get the words out. The six-year-old, Fiona, also asks to be excused, but in a more excited voice. She’s not expressing any particular judgment – she’s just following Edwin’s lead like it’s a game. Still, it somehow feels like she, too, is rejecting me.

Now it’s me, Shannon and our twelve-year-old, Devlin. They’re still glaring with disapproval.

“You were both in the stands,” I say. “You saw how they were manhandling us.”

“They were just taller,” Shannon says. “They weren’t playing dirty.”

“Maybe not, but that team was rigged,” I say. “They were gigantic. The only thing my team could ever do is…form a Lollipop Guild.”

“You shoulda called timeout in the second quarter to settle them down,” Devlin says. “The other team scored 10 straight points, and you didn’t do a thing.”

“I wanted our guys to play through it,” I say.

“They’re 9 and 10,” Devlin says, as if being 12 makes him some sort of child psychologist. “They can’t play through it.”

Come to think of it, several members of my pint-sized team did return to the bench at half-time crying.

“I thought they’d be a little more resilient,” I say.

Devlin shakes his head in shame. “What a massacre,” he says, “and then to order a hard foul like that.”

I look to Shannon.

“Is he allowed to talk to me like this?” I say.

Shannon absently runs her fork through a tiny pile of green beans.

“You know what the most upsetting thing is?” she says. “Your attitude going in was so good, so positive. Your introduction e-mail to all the parents was great…I spoke to several of them and they were thrilled with your learn-first, win-second approach. But the approach was a little surprising to me, frankly, because it was so not you.”

“Oh stop it, Doug,” Shannon says. “If you’d just not tried to fool yourself about your nature from the beginning, maybe it wouldn’t have snuck up on you, bitten you in the behind, and gotten you kicked out of a children’s basketball league.”
I deadpan to Devlin. “Is she allowed to talk to me like that?” I say.

Now I’m back to Shannon. “Is he allowed to watch that?” I say.

“Seriously,” I say to Shannon. “There’s a lot of sex talk in that movie. Are you ok with him seeing that? And what about the-” I shield my mouth from Devlin and lip the words fake orgasm scene.

Devlin rolls his eyes. “May I be excused?” he says.

“Yes,” Shannon says, not taking her eyes off me.

As Devlin saunters off, I slump in my chair, trying to figure out where it all went wrong.

“Well, you’re the only person I’ve ever known to snap a putter in half over his knee at a miniature-golf course,” Shannon says.

“Am I ever going to live that down?” I say. “That was 10 years ago. And besides, the speed of that windmill was screwed up. There was no way to putt through it.”

“Of course there wasn’t,” Shannon says. Then she starts glaring at me in a way that is far more serious than before.

Shannon motions me into the living room, where Edwin and Fiona are playing Mario Kart on the Wii, with Devlin watching.

And on it goes.

Shannon whispers into my ear as I watch the kids.

It all becomes so clear in that moment.

“Uhm… that’s not what I was getting at,” Shannon says. “What you’re raising are children who blame everything but themselves when they encounter hardship. That’s not a recipe for success.”

“See?” Shannon says. “Can’t assume any responsibility, can you.”

“I assume responsibility. I mean, I am their father,” I say under my breath. “I’m just saying it’s not my fault.”

“Are you… proofreading anything that’s coming out of your mouth?” Shannon says.

My brain gets all hazy. The idea that I might be responsible for my kids’ shortcomings does not register.

“I don’t even…spend enough time with them to be a bad influence, do I?” I say.

I step toward them. Shannon grabs my arm.

“What are you doing?” she says.

“It’s not like being a Jedi,” I say. “I just need to be encouraging, pleasant, and tolerant of…incompetence and failure.”

“And what exactly is it about your current body of work that makes you think you can do that?” she says.

I look at Shannon, and speak my next words oblivious to the paradox.

Shannon lets go of my arm, but looks worried.

Five minutes later, I understand why.

Rogue said...
It's genius ET. I love it. It's like I am almost reading script of "Curb your Enthusiasm " . Fukin A,

Japes said...
Oh man, a clothesline? Are you sure you didn't work teach your son that? I mean he must've at least seen you watch the McHale clothesline to get that idea.

“Well, you’re the only person I’ve ever known to snap a putter in half over his knee at a miniature-golf course,”

Evil Ted said...
Rogue - Easy now. I'll try to steer friends and fam from the comments, but they have free will.

The tone of Curb is one of my inspirations, and, coincidentally, Curb will be returning July 10th - perfect timing, given that the brilliant Game of Thrones is ending its first season.
6/17/2011 9:14 AM

Anonymous said...
So let me get this straight: You tried to coach your team by adopting Phil Jackson's hesitance to call time-outs and Chuck Daly's reticence to order up a hard foul? LOL. That's not over-comptetitiveness. I think you lost scope of the game, man. Did you have them running the Princeton offense too? Triangle? Four corners?
6/17/2011 9:40 AM

Unknown said...
Guess nearly all kids take the "foul him hard" technique the wrong way. I was 10 when I got my first of two intentional fouls I've ever got. My coach then had been trying to teach us to foul hard instead of giving up easy layups on the fast break. Since I was the fastest player on the team I was the only one that could run down most opposing fast breakers. I had a couple of fouls that were hard but one game I went to far. I didn't deliver a Kevin McHale clothesline, rather I used both hands and shoved the poor kid into the wall as he was in the air. It was our last game of the season so lucky for me I didn't miss any time.
6/17/2011 10:51 AM

JJ said...
Argh, how each chapter ends on a cliffhanger is driving me crazy!!! Damn you, Ted, you're Evil!

By the way, are these chapter a day every weekday or counting weekends too?

Dan B. said...
Oh dear God, the Taiwanese animation news people take on the whole Shaq sex tape story. You have to see their interpretation of the situation.
6/17/2011 11:59 AM

Evil Ted said...
Sorbo - It's only just beginning...back in time, forward in time, time after time, time interacting with other time. Get ready for it.

JJ - I have a couple of pretty short chapters coming up, so I would feel extra evil to make you wait over the weekend for em. Expect weekend material for now.

Like the mini golf stuff. Makes me think "Doug" is not so coincidental as a name. Do you know my mini golf upbringing?

Somewhere in here there's a "What." that needs a question mark. I'm not reading for mistakes, just happened to notice.

Comments get authorized / published, so there may be a little lag time...glad you're enjoying...so is there a relevance to "Doug" for you?

The "What" in the text is intended to have no question mark. When a character says "What?," with a question mark, it's a huh-I-didn't-hear-you word, with a rise in verbal tone.

The tone without the question mark is different:

"...she starts glaring at me in a way that is far more serious than before.

Still, keep looking for typos! Thanks!

Sarah said...
I realized the authorization thing after I did the test run.