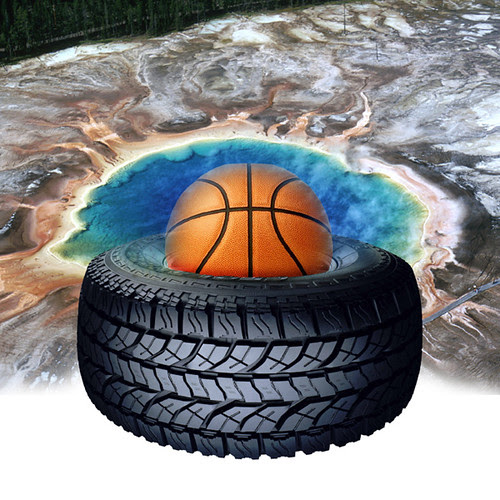 Regular readers of this blog may recall that during the 2010 Celtic-Laker NBA Finals, I took an epically long road trip with my family out West that involved camping, bears, buffalo, and all manner of rustic nuisance. Travelling ever deeper toward the Yellowstone wilderness, I had a heck of a time trying to follow my beloved Celtics from game to game. It was a stressful but magical period of my life.

Even as it was happening, I knew my adventure had the makings of a profound, hilarious, earth-changing story.

I was completely wrong.

…when enhanced with my undeniable brand of quirky plot conventions, selective fictionalizing and pop-culture tangents, the tale turned into something I think is not all that embarrassing.

Dear readers, I present to you: Traveling. It is dedicated with love to the 2010 Boston Celtics. Without their cathartic, gut-wrenching game 7 Finals defeat (spoiler alert! Oops, too late), I would not have been inspired to forge this desperate attempt to make something good out of something so very very turrible.

Traveling will arrive to you one chapter a day for the next 50 days. That’s right, 50 chapters. I know, I know, a normal fan would have probably just punched a hole in a wall to get their emotions out and be done with it, but my trademark is taking things way too far….and I have plaster walls.

Today, we begin with the synopsis – the “book jacket” text, if you will.

It is June of 2010. The Boston Celtics and the Los Angeles Lakers are engaged in yet another epic and mystical NBA Finals clash. At the same time, avid Celtics fan Doug McAllister and his family are taking a 3,392-mile road trip from Chicago to Yellowstone National Park and back. As he ventures deep into the harsh, unapologetic wilderness, Doug valiantly tries to keep up with his beloved Celtics, encountering laundry-obsessed fellow travelers, unreasonably patriotic Boy Scout troops, and absurdly ancient Laker Fans along the way.

Despite myriad obstacles, Doug stays true to his dedication to Boston sports, his ability to frustrate the living hell out of his wife, and his need to consume 5-hour energy drinks.

Told in part from the moronic viewpoint of Doug’s Competitors Anonymous support group, Traveling revels in pointless conversations, disjointed narrative, and arbitrary breaches of the space-time continuum (whatever that is).

If Celtic and Laker fans can agree on anything, it is that the Celtics are the greatest pro basketball organization of all time, the Lakers are more evil than Hannibal Lecter and Darth Vader combined, and despite all outward appearances, this tale is less about green versus gold than about the endless and futile struggle of an ordinary man to keep his petty obsessions in check.

No, seriously, you need to fasten it now. It’s dangerous not to wear it.
I don’t care if you dropped your McDonald’s action figure on the floor. You can get it at the next rest stop.
Sheesh.

Dan B. said...
This could be fun. And slightly insane. I can't wait for the part where you meet Latrell Sprewell and his family in a tent at a campsite, and when you ask how his vacation's going, he responds "What vacation? This is where we live now. I've got a family to feed and this is all I can afford!"

On second thought, that part is kinda sad. Especially since you bought his yacht at auction for $15.

Anonymous said...
I gotta wonder what you were thinking when you planned a trip in early/mid June. Even if it wasn't Celtics/Lakers, *somebody* would be playing in the NBA finals.
6/14/2011 9:01 AM

Evil Ted said...
Dan B - Expect fun AND insane. Only my eyes have seen this epic tale in it's full ridiculous glory - not my wife, not Bawful. No idea how it will go over, but to me, it's fantastic.

chris said...
Dan B.: - This so desperately calls for someone to photoshop the Forever Alone ragecomic face on a photo of The Most Esteemed Commentator In The Universe, EVER.
6/14/2011 10:08 AM

Oh wait. We're all too busy with the same personal problems as yesterday, while Crab gets Maverick Carter and others to tell him he is awesome.

Yeah, silly me. You experiencing an epic roadtrip that tore a hole through multiple dimensions just couldn't compare to being a global brand.
6/14/2011 10:12 AM

draftaraujo said...
if there is a new banner next season i would love to see

Might as well get this out of the way up front: I place too much value on my fiction writing and my desire to entertain those who wish to be entertained to allow any acerbic, petulant, cancerous comments to sit in the comment chain and take away from everyone else's enjoyment. If you are appreciating my work, or have particular things that tickle your funny bone, please feel free to express yourself. If you want to fire baseless pot-shots, please refrain and go somewhere else.

Keep an open mind, stick with the overlapping narrative of the chapters, and you will be rewarded.

The Sweetness said...
So I couldn't find any mention of this, but as far as some true epic basketbawfulery, it occurred to me Sunday night that Erick Dampier played in both the 2006 and 2011 Finals but does NOT have a ring. He lost with the Mavs in '06 and lost with the Heat (really, with the bench) on Sunday.

Danny Figueredo said...
Oh man, I'm so excited to read this! I'm also very glad you decided to dedicate the work to that Celtics team, I think they were one of the very best teams the NBA has ever had. Sometimes I wonder about Perk, and what kind of difference he would've made, but it hurts to think about for too long.
6/14/2011 12:59 PM

Kono said...
Dampier doesn't care. There are reports that he, and other unnamed Heat players, partied with the Mavs at a Miami nightclub after their victory.
6/14/2011 1:22 PM

winnetou said...
Having read a few mentions of a new logo for the next season, I was wondering whether you'd consider changing the logo text's font to Comic Sans. ;)
6/14/2011 3:17 PM

Anonymous said...
"Might as well get this out of the way up front: I place too much value on my fiction writing and my desire to entertain those who wish to be entertained to allow any acerbic, petulant, cancerous comments to sit in the comment chain and take away from everyone else's enjoyment."

Does this mean your gonna be deleting comments you don't like? Sounds like you should lighten up some.
6/15/2011 1:24 AM

As for Walton, he rules. Before I was born, my parents lived in Detroit and my dad played a lot of pick-up, and since he was tall, white, and curly-haired, everyone just called him "Walton." He was also offered a job playing for the Washington Generals, the fake team that plays and generally loses to the Harlem Globetrotters. (He declined.)
6/15/2011 4:33 AM

Evil Ted said...
Thanks Will. I thought it was pretty clear too.

Anon - People tend to get freaked out by the idea of "censorship." I don't mind it one bit - particularly for material my friends and family will be reading. You'll notice, however, that your comment is still up. Just try to be nice.

Anonymous said...
Wait, so you say will is right and that you won't delete comments you don't like, you just want people with negative things to say to stay away, but then you say you believe in censorship and will be deleting negative comments? Which is it?
6/15/2011 11:40 AM

ET merely agrees with Will that if you don't like his stories then don't comment, never said he wouldn't delete comments, that was an assumption you made from his previous statement.

Next, he didn't say he believed in censorship, but that he doesn't mind it. He has every right to monitor what's being said, not because comments might hurt feelings, but because people he actually cares about might be offended by what is being read.

I hate anonymous internet bashing over the internet, but it's not going to stop me from being irritated at failed logic or at the failure of people to read.
6/15/2011 12:13 PM

If I find anything offensive, or think loved ones would find it so, I would feel compelled to remove it.

Anon - I will make you a deal. (I can't believe I'm making this deal with an anonymous person - might want to name yourself). If you choose to stay and read, then do so, chapters 1 through 50, without comment. If you are unhappy at the end, e-mail me at ted.evil@gmail.com and say anything your little heart desires, and I will:

- give you your money back, AND
- say that I'm sorry you didn't enjoy my work.

It will be between us, and I'm cool with that. Incidentally, I have completed this piece, and I am so confident in its collective magnificence that I guarantee you you will be apologizing to me on day 50.

Unfortunately, you're anonymous, and the true breadth of your appreciation will float away in the internet wind, but turning you will mean something to me.
6/15/2011 12:44 PM

Anonymous said...
Hey it's your blog - if you don't like anon comments then remove that as an option. As for the censorship My whole point is that this blog is centered around making negative comments about things but now cause your ego is fragile you're being all 'if you cant say something nice dont say anything at all.' That goes against everything this blog has been up to this point. If you want your relatives to read this story of yours without negative commentary why don't you just mail it it to them so that everyone who comments here can be free to speak their minds as always.
6/15/2011 1:55 PM

Evil Ted said...
I'll leave the settings as they are. Be anonymous, Yams. It's fine.

Evil Ted said...
Ok, deal. I look forward to accepting your praise on day 50. Identify yourself as Anonymous Malcontent Number 1.