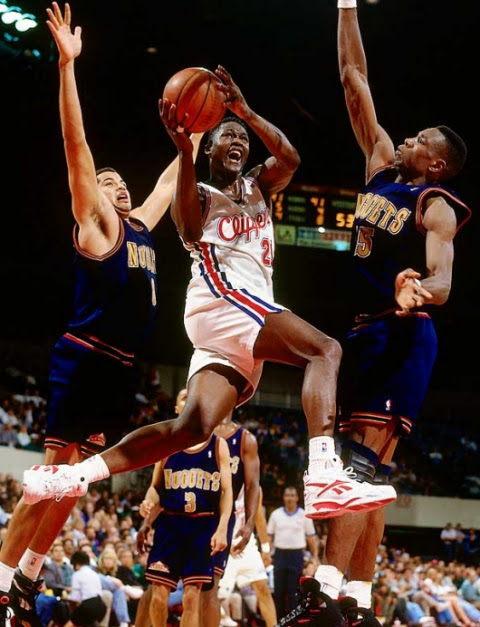 This isn't a Photoshopped graphic or a picture from some hell dimension.
The great Dominique Wilkins actually played for the L.A. Clippers.
After what he deemed a "senseless" trade from the Atlanta Hawks to the Los Angeles Clippers, Dominique said: "I've always wanted to be in Los Angeles and I'm happy to be with the Clippers. The Clippers are a team that will take care of me and that I will play hard for." -- March 21, 1994.

Postscript: Less than five months later, the Clippers withdrew a contract offer and 'Nique signed a three-year deal with the Boston Celtics.

As for the Hawks...they dealt the greatest and most-beloved player in franchise history AND a first round draft pick for Danny Manning. However, Manning played only 26 regular-season and 11 playoff games with the Hawks before rejecting a long-term contract offer and signing with the Phoenix Suns. Which might have been for the best, since Manning blew out his knee and never really recovered.

On the bright side, 'Nique finally won that elusive championship. If you count Euroleague and Greek Cup titles (which you don't.)

Japes said...
It always puzzled me that he never made the 50 greatest players of all time list. They put Shaq on there when he hadn't done anything at that point in his career. I guess they were pissed that he shunned the NBA for a few years to play in Europe.
9/01/2009 2:01 PM

botaz said...
I guess you could say he won the Euroleague... I believe that he was injured when Panathinaikos won and did not play in the semis or finals.
9/01/2009 2:11 PM

Stotts Era said...
as a hawks fan, i assume he is getting revenge from that trade by providing the most ridiculously bawful commentary i've ever heard
9/01/2009 7:59 PM

Anonymous said...
And they say Lenny Wilkins is a great coach. Way to destroy the best chance the Hawks ever had at a championship run, dickhead.
(Still bitter.)
9/02/2009 12:40 PM

austin rivers said...
Dominique combined power with finesse like no player before him or since him has been able to replicate. He is one of the most underrated players in NBA history, and was overlooked because he didnt have a flashy persona.
2/03/2010 2:53 PM
Post a Comment
<< Home
Subscribe
RSS Feed
Mailing List