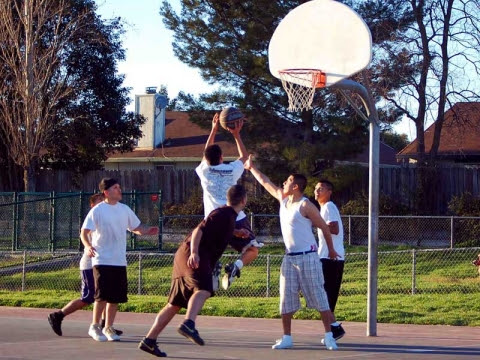 How good a pickup baller are you really? The answer may not
be obvious. It'll be even less obvious after you read this.
Since Basketbawful's tank is on Empty today (waiting for the season to start can be so very maddening), he asked me to expound on the pick-up basketball equations I introduced on Friday.

It's all very simple. You can't fudge physics or math, so just pay attention to these hard, fast rules and you too will be able dominate -- or at least understand why you're not dominating -- your next pick-up basketball game.

However, not all teams that equal 5 are treated equally:

This team equals 5, but it could be better, or it could be worse than Team 1. Specifically:

B. Will their opponents play help defense and ultimately negate the 1.5's, who, for lack of a better offensive option, will have to attempt a bad shot in the face of a double team?

C. Are the 1.5's ball-handlers? If so, they can more easily minimize the number of times the .6's get the rock.

We must now consider other factors, such as the condition of the court. A badly swept court, which does not allow more talented players to make quick moves to the basket, may lower the quality of play more for better players. Now Team 2 above looks as follows:

Meanwhile, Team 1, comprised of average players who are equally affected by the poor conditions, looks like this:

Now, playing outside can involve:

1. An uneven court, where (c) equals the number of cracks in the pavement

3. Sunlight, where (s) equals the brightness of the sun as compared to (L) it's location in the sky as it relates to the backboard.

4. Distractions, where (B) equals the quality of babes watching from the sidelines.

The following equation should be self-explanatory:

Also factor in the mental state of the players (m). For example, did Mr. 1.5 just have a fight with his wife? Did he lose his job? Are his kids driving him up a wall? This circumstance halves his ability in most cases:

Occasionally, however, a player uses pickup basketball as a glorious escape from the torture of his sorry life. This can actually improve his play marginally:

And, of course, even the best player can use bad judgement and have too much to eat for dinner (D) before basketball (Hey, I like lasagna. Sue me.), which can of course, adversely affect his speed and emotional state (yes, your emotions also take a hit when you constantly feel like you're going to vomit).

The equation that takes all of these factors into account is simple. Note that lesser players are not as adversely affected, because they already kinda suck:

And if they are playing outside:

Well, there you have it. Simple math. I hope I have managed to strip the essence of basketball down to its...uhm...essence...in a way that even Red Auerbach, the master of simplicity, never could.

Anonymous said...
Can't fudge math or physics? John Hollinger begs to differ. For example, did you know that a super trade could net the Knicks a 96 win season? Also, that replacing Shaq, Nash, STAT, Barbosa, and Richardson with low-level replacement players (one of these already happened...sorry AnacondaHL) would cause the Suns to end the season with -1.5 wins? That must be what it's like to play a season for the Clippers.
8/24/2009 5:02 PM

Mintz... said...
I'm surprised you've only recently written about this simple mathematical process.
I've actually been using these equations for years before every pickup game to see if they're worth the effort...
8/24/2009 7:32 PM

Evil Ted said...
Michapalooza - After my first entry on this matter, Basketbawful asked me the same thing. I consider myself about a 1.3 (fast, good passer, solid mid-range jumper, run the point effectively) and Basketbawful is a solid 1.5 (height, commanding low post/rebounding presence, good speed for a big, great from long range).

Jeremy said...
There are a couple potential problems -- you assume a static setup once play has begun. Any number of things may occur during the game:
the wife may phone saying she's taking the kids and going to her mother's house;
she is pregnant;
she is pregnant but not with your child;
she is not pregnant but is sleeping with another man;
she is not pregnant and is not sleeping with another man, even though you keep paying strangers to sway her because you want to get a divorce, etc.

So what you need to do is consider the effect of time. This will introduce integrals into the equation. So, for

You're a solid 1.5, but coming into the game you are expecting a phone call from your wife at some point as per the last situation mentioned above. Your eagerness and excitement is driving your game so you performance is rising slightly.

Then your wife calls and she is in tears, and tells you she loves you very much and tells you all about how some guy tried to hit on her but she rebuffed him, much to your secret chagrin. Crestfallen, you mumble back your unrelenting love and your game starts sharply dropping off as your mind obsesses through another failed attempt.

However, near the end of the game, you begin thinking positively once more: It's okay, I can try, try again! Quitters never win! You sink the winning shot and revel in the accolades of your companions, flying high once more.

I believe the following picture best illustrates this scenario:

Anonymous said...
Anonymous - that beasley comment is too funny for you to remain anonymous. Awesome.

And I also call shenanigans on the "can't fudge math" comment. Go take a statistics course, and note how any academic worth his or her salt can pretty much make data say whatever the desired outcome is.
8/25/2009 8:16 AM

kingofkansascity said...
Your average player has to take into account the quality of the pickup league. For example, in a league with all D-1 level players, I would be a .7, but in a league where no one played college ball, I would be a 1.4 or higher.

Also, latecomers change the dynamic. A seriously bad or outrageously good player throws off the balance. After all, average is based on the sum of all parts. Change the parts and the average is different.

I've seen this in my own pickup league. Get enough low level players on the floor and suddenly guys that are merely average or below average are making plays like they are 1.2s or 1.3s, but when more talent is introduced, they revert back to their .7 norm.
8/25/2009 10:34 AM