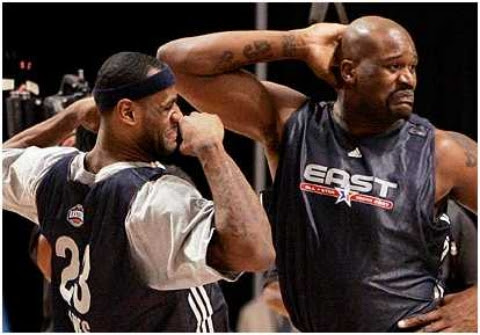 Note: This post is the word of semi-regular contributor AnacondaHL. What follows is the unedited e-mail he sent me late last night.

Bawful, go ahead and cancel whatever you were going to post tomorrow, because do I have a story for you. To be honest, I didn't think there would be enough content for a post when this all started, but with the way things happened, well, you'll have to see for youself. I've got a buddy who moved to Las Vegas to work in a club, and I recieved a text message from him tonight. Said buddy is incredibly sports-unknowledgeable, but he can tell in an instant if you (male or female) are wearing anything from Express. I'm going to post the whole conversation un-edited, minus some comments in parenthesis by me, but you can feel free to edit it however necessary to protect the innocent *snicker*.

(21:40) Las Vegas: There a whole bunch of nba players coming into the club right now. I have no idea who they are u would appreciate this so much more

(21:44) AnacondaHL: The NBA draft is tomorrow holy crap that's hilarious. You are in for a busy next 30 hours

(21:50) LV: Its a private party for the players association. I'm talking to lots of tall people. And managers/owners/important folk. I wish u could switch brains with me cause I don't care about any of these people

(22:58) LV: Lots of people were recognizing him anyways

(23:02) AHL: Oh God please make sure. I'm emailing you a link to his website, including his poetry/rap.
(insert link here to us discussing it prior on this blog)

(23:08) AHL: OMG. STAY AROUND HIM SOMETHING HILARIOUS IS BOUND TO HAPPEN. REPORT BACK TO ME ANYTHING. GET HIM TO FREESTYLE.

(23:08) LV: There's another guy here too people were talking about. All star won a dunking comp dwight something. Or something dwight

(23:11) LV: I'm not allowed inside I'm working lol. if I try to go in and openly socialize I'll be assassinated by my managers.

(23:12) LV: That's it. How could I be lying I don't even kniw his name. His manager or agent or something was telling he's a huge clown though
(At this point I punched myself in the face)

(23:19) AHL: Yea that's him. I'd send you an MMS, but I'd feel stupid since he's such a recognizable face and name. Ask the agent how much of a jerk Stan Van Gundy really is

(23:23) LV: He's inside now. Nobodies hanging around front with me anymore lol

(23:25) AHL: I want hourly updates on all the NBA groupies going in and out, who their with, 10 scale hotness rating, and percent chance they are prostitutes.

(23:27) LV: Very few women have gone in actually. I'm very surprised. Its all hotshots with admission badges. Although agent manager guy was telling me about the girls they have up in the suites

(23:36) LV: Lol I know one of the girls is an employee at tao. Scandalous, but expected

(23:47) LV: Some tall thick black woman just strolled in w/out creds. Nicely dressed and mannered tho
(me, scrambling to load up my computer)

(00:00) AHL: Derek Fisher is on the Lakers, who just won the championship, beating the Magic, who's star is Dwight Howard. This is such a confusing list you're giving me

(00:02) LV: Apparently its a commitee. There are player reps here from all the teams

(00:04) AHL: Damn. I knew dreaming for a club confrontation between Vujacic and a thick woman was too good to be true. Ask who's here for the Suns!

(00:11) LV: Lol lemme see
(at this point, I've found this on Google)
(disappointed at finding a lack of thick women in the brochure)

(00:25) AHL: Well at this point this event is probably old news on Twitter. F'in scrubs. Let me know if anything/anyone else happens. Plz don't get shot.

[Author's note: you may link to the "Haha now you're stuck in Ohio" picture, and the Ben Wallace inflatable defender here in their respective places. I would, but I'm getting calls from funeral services throughout Phoenix, wanting a cost estimate on my crying myself to sleep.]

chris said...
At least being stuck with the Kings here in Suckramento, we have no more expectations. What you guys are going through is quite like what the purple paupers experienced ca. 2005-2006, when the Maloofs started begging for a new arena and selling off just about anyone with talent. Brace yourself.

Nick Flynt said...
It's like the the powers in the West that don't win a championship just collapse eventually. Before these last two years, the Kings had a top three winning percentage in the league (since 96-97 I believe). Now look at em. This is going to be us, Suns fans.
6/25/2009 12:11 PM

chris said...
Buck Nasty: We could go even further back and look at another one-time Western power that never broke through: the early-90s Blazers.

The Mavs looked like they were headed that direction, but have seemed to somewhat right the ship, albeit remaining adrift on the Trinity River.

cdj said...
i don't think that was dwight howard there. He was on Jimmy Fallon yesterday in NYC, and nate robinson twittered that they were having dinner in the city.

Also, just to deflect some of the suck, what a horrible time for FootBawful to be down. Not only was that like the Bawfuliest post season ever, but with T.O. on reality TV, it's like that site could write itself.

I'll add more once I hear from my LV contact tonight if anything further happened, or will happen tonight.
6/25/2009 3:25 PM

kazam92 said...
HALF MAN HALF A SEASON IS A MEMBER MAGIC!

DKH said...
So the Magic now have Vince Carter and Ryan Anderson in exchange for Alston, Lee, and Battie. I think they've got a pretty intimidating lineup for next year:

Of course, that depends on them signing Turkoglu and Gortat to new contracts. Gortat might be more interested in a team that could promise him more minutes.

But aside from Nelson, who is "only" 6-0, a starting lineup of Nelson/Carter/Turkoglu/Lewis/Howard would be one of the tallest in the league and a huge matchup nightmare for pretty much anyone but Los Angeles, assuming they get Odom and Ariza back.
6/25/2009 6:36 PM

It's okay, the humor flowing as the analysts stumble to justify Minny taking TWO POINT GUARDS WITH 5 AND 6 is easily covering.
6/25/2009 7:12 PM

AnacondaHL said...
Will - doesn't even matter. A slim ray of hope just glimmered into Suns fans' eyes, since Earl Clark dropped into our hands to fill out SF/PF minutes, and there's a potential Tyson Chandler trade a-brewin'.
6/25/2009 8:11 PM

chris said...
AnacondaHL: And whoever is running the front office now in Minneapolis CAN'T say they've given a team an NBA championship from the desk, the way that Kevin did.
6/25/2009 8:38 PM

chris said...
I love how Shaq now claims in this puffball interview that he is soooo willing to come off the bench for the Crabs.

Will said...
chris- Well, Shaq did say that in college he backed up the "great" Stanley Roberts, so I have complete confidence that there would be no problem at all if he backed up Big Z.
6/25/2009 8:49 PM

Cortez said...
"I think they've got a pretty intimidating lineup for next year"

Another one falling for the old Vince Carter mirage (cousin of Knee-Mac I might add).

"Are we absolutely sure the T-Wolves fired McHale?"

plonden said...
I hear rumors that the Warriors drafted Stephen Curry to include him in a trade to the Suns for Amare. If the Suns are going to get rid of Biedrins, I think these three would be my ideal pieces coming back from GS: Biedrins, Randolph, and Curry. Probably wishful thinking though on my part.

Nick Flynt said...
I actually said that if the Bucks were smart and not just listening to pundits they would take Jennings. The fact that Jay Bilas had Jrue Holiday, Jeff Teague, and like two other guards ahead of Jennings shows that:

A. Anyone who follows basketball could do the job of ESPN's so-called analysts

B. People were hating on Jennings because they all still think that players coming out of Europe are second rate compared to college players.

The guys at ESPN acted like it was impossible for scouts to watch some stream on the internet, or watch the damned NBA TV Euro game of the week. Hell, you can buy plane tickets to Italy, it isn't like scouts didn't know where to find him. I hate Bilas.
6/26/2009 8:11 AM

Anonymous said...
Disappointed at finding a lack of thick women in the brochure? I feel your pain. I thought that is what a "Trunk Show" is. After all, it's listed under "The Events" section!
6/26/2009 12:04 PM

Anonymous said...
Where was this club? I was riding the airport tram to the baggage claim with Luke Walton on Wednesday night and figured there was an NBA draft party Thursday.
6/28/2009 3:10 PM