Monday, December 01, 2008
Shock Alert: The Knicks-Marbury marriage is over
By Basketbawful at 2:09 PM
6 comments 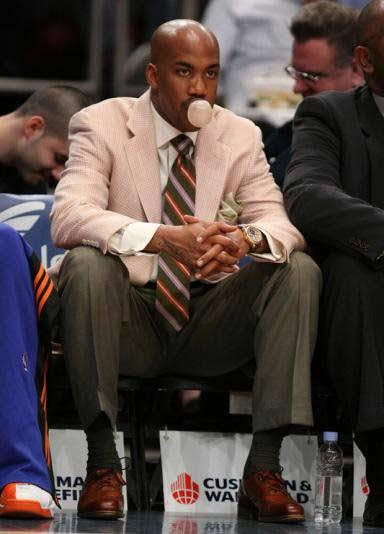 Stephon Marbury -- last season's runaway winner of my Least Valuable Player award -- has stunned the world by announcing that his "marriage" with the New York Knicks is over. Yeah. That's like walking in on your father banging the maid on your mother's corpse and then having him calmly explain that daddy and mommy won't be living together anymore: You probably had that one figured out already.

Here's some of the choice quotage from Starbury's exclusive interview with the New York Post. Better sit down with a big box of Kleenex. This one's a tear-jerker of epic proportions.

"I sat there for three weeks and didn't say one word. I didn't hear one of my teammates say, 'Why isn't Stephon Marbury playing? This is a good system for him, even to play with the second unit and bring more firepower.'

"When things got bad and then worse, guys like Quentin Richardson say, 'I don't consider him a teammate. He let his teammates out to dry.' He didn't care I was his teammate when I was banished. They left me out for dead. It's like we're in a foxhole and I'm facing the other way. If I got shot in the head, at least you want to get shot by the enemy. I got shot in the head by my own guys in my foxhole. And they didn't even give me an honorable death.

"Mike [D'Antoni] had no intentions of me playing basketball here. He gave me straight disrespect. It was beyond disrespect. He put in (Danilo) Gallinari, whose back is messed up and (who) didn't participate at all in training camp ahead of me (in the season opener). That's saying, 'I'm letting you have it right now.' He was sticking it to me. He knew I was in my contract year and did everything they asked me to do. He's not trying to help me. He's trying to hurt me."

Ah. Only Stephon Marbury could invoke "shot in the head by my own guys" imagery only days after New York Giants wide receiver Plaxico Burress shot himself in the leg at a nightclub. And if history has taught us anything, it's that Starbury should keep his mouth shut during any and all NFL-related controversies. As well as every day of the week that ends in "day."

The Knicks, obviously, need to just buy out Marbury's contract and be done with the whole mess. And fast. After all, according to Google research scientists, we've almost depleted the Internet's once vast resource of angry Stephon Marbury images. Of course, Donnie Walsh has stated over and over that he's opposed to buyouts...but the reality is he's just trying to force Marbury to accept less than the $20 million he's owed. Think it's working? Said Marbury: "They want to take my money. I'm not going to let them." Translation: Hell no, it's not working.

But hey: LeBron in 2010!! Okay. Has everybody forgotten about Marbury yet?

AnacondaHL said...
Fixed for ya.
"That's like walking in on your father having a truck party with the maid while calling your mother a 'B' and then having him calmly explain that daddy and mommy won't be living together anymore"
12/01/2008 3:34 PM

Anonymous said...
" I got shot in the head by my own guys in my foxhole."

Typical for Marbury. He thinks the fight is between him and the coach and management, not between his team and the other teams. So he's got some sort of foxhole that he uses against management. Great. You have fun at your own little war. Everyone else can pay attention to beating the other teams. Numbnuts.
12/01/2008 3:52 PM

Unknown said...
I want to root against Starbury, I really do... but I paid like $30 for two pairs of his shoes. I don't want to see my money go to waste. If he doesn't get back on the court soon, I will have no choice but to save my money up for a pair of DWades. I will not wear the shoes of someone who doesn't even play garbage time. If I wanted shoes from a player like that, I'd buy myself a pair of Super Marios.
12/01/2008 4:19 PM

Anonymous said...
you need to link to that interview that sums up Stephon Marbury the best. You know, the one where he's high out of his mind, and calls his wife "his better hoe"....and plans to drop "10 dimes...2 assists" over the course of the season, and a bunch of other hilariously stupid things that come out of his mouth. Best interview ever.