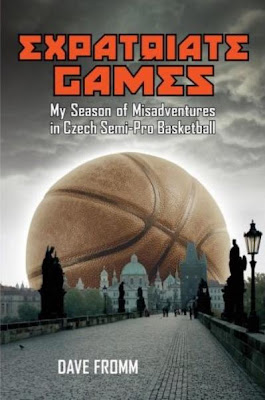 "Have you ever had a dream that was so crazy and seemingly unrealistic you never even tried to follow it? This book is about a guy who followed that dream all the way to Prague and discovered that, sometimes, the journey is more important than the dream itself. Read it and you might find yourself willing to take a few more chances."

That's the pull quote I wrote for Expatriate Games: My Season of Misadventures in Czech Semi-Pro Basketball. Or, I should say, that's one of the pull quotes I wrote. Here's the one that the editor wanted to use but (for obvious reasons) did not:

"If the earth ever spins off its axis and kills us all, it'll be because of the titanic balls it took for Dave Fromm to move to Prague and just walk on to a semi-pro basketball team. Next time I hesitate to follow my dreams, I'm going to think back to this book."

Expatriate Games is the story of David Fromm, who -- like many people before and after him -- had no idea what to do with himself after he graduated from college. Or rather, he had ideas, but he didn't particularly like any of them. Law school beckoned but didn't exactly entice. He wasn't ready to grow up and start taking on adult responsibilities, so he talked himself into doing something wild and unexpected: Move to Prague and play professional basketball. Brilliant!

The idea, in and of itself, wasn't entirely original. A lot of the guys I played pickup ball with in college -- which was around the same time Fromm went on his most excellent adventure -- talked casually (but quite seriously) about how they probably could and therefore should move to Europe and become a pro baller. Seriously, I knew several people who thought that was a perfectly valid option in the mid to late-90s. Like, you could just fly halfway around the world and walk onto a pro team. Snap of the fingers, just like that.

And Fromm did it. Sort of.

Despite a language barrier that he never really broke through and a cultural gap he never fully crossed, Fromm tracked down and improbably walked onto a semi-pro Czech team called TJ Sokol Kralovske Vinhorady. In between the practices and games, he managed to earn a one-year postgraduate degree (which partially justified the zany odyssey) and fall into one of those crazy "I'm away from home and in a foreign and totally exotic place" romances that hit you hard and leave you feeling, well, like you got hit really hard.

The book is sort of an extended diary of the experience. There are plenty of vivid and amusing descriptions of the life that went on around playing basketball -- including the occasional side trip into of what was going on in the NBA at that time -- but the best parts of the book come when Fromm talks about playing and practicing. At times, he was even better than he thought. At other times, he was much worse, particularly since he was nurtured on Jordan Era hoops, which meant that his style of play (cutting, slashing, breaking his man down one-on-one) didn't quite mesh with the European style (passing into the post, cutting without the ball, spotting up for an open jumper).

Fromm was alternately delighted and frustrated by his teammates, and they probably felt the same way about him (although, thanks to their incomplete and broken English, it was sometimes difficult to tell exactly what they were thinking). But one thing that he found out is that camaraderie is something of a universal language. Win, lose or draw, there was always time to celebrate victory or (more often) drown the sorrow in a bitter but surprisingly tasty Czech brew.

That year came and went in a flash. Fromm played semi-pro ball, but he never earned any money doing so (unless you count the proceeds from this book) and his team never won anything of note. He kind of fell in love, but that love never really went anywhere. He met a lot of fascinating people, but many of them have been lost in the mists of time. In the end, the journey feels somewhat surreal, like a complex and vivid dream. But what a dream to have and make come true, you know?

Anonymous said...
You spelled his name From in the last paragraph or a little earlier. Why in god's name did you decide to talk about this?

Here are some good basketball books that were so hard to put down, I read all of them in a week(all together, not each).

The Jordan Rules (Author: Sam Smith, Everyone knows about this one, revealed that MJ wasn't some kind of amazing adonis of a man and perfect in every way.)

Let Me Tell You A Story

(Stories from John Feinstein on Red Auerbach, great stuff from Red in this one.)

Let Me Tell You A Story is the best one, but there's a lot of good information in the first two.

Anonymous said...
I realize some might see this as an so underrated its overrated but who didn't love "Can I keep my jersey?"


on another note can someone write a book about how much money the wizards appear to have wasted? jamison I hear is out till march (from a preseason game!?) At least its butlers team now
10/07/2008 9:11 PM

Unknown said...
Basketball in Eastern Europe on that level is indeed played very fundamentally. They pass a lot, use lots of screen, almost no dribbling, and make the most basic of moves.
It's a very sound style, - sometimes almost robotic - but hard to mesh into. I know this from playing with Eastern European expatriats in my country.
10/08/2008 3:45 AM

Anonymous said...
Good news Matt, Larry Bird says that the Pacers have a bright future, according to NBA daily email/newsletter.

On a more related note, I didn't mean I had a problem with this post (as if it mattered) but I was wondering why you happened to pick this one. I just realized it's because you f'ing wrote for the thing.
10/08/2008 8:21 AM

AnacondaHL said...
kazam92 - Paul Shirley is fantastic, I really wish the Suns kept him around. Cheering for him to make a 3-pt shot in garbage time was some of the best times my roommates and I had.
10/08/2008 8:49 AM

Basketbawful said...
Buck -- No, no, I didn't write it. The author contacted me a while back and provided me a copy for early review. I enjoyed it quite a bit, and thought it would be a fun read for people who follow this site.
10/08/2008 8:50 AM

Anonymous said...
Speaking of people playing overseas and dreams and things from the Jordan Era you should write about Shawn Kemp who even though its old news turns out isn't gonna end up playing in Italy after all.
10/08/2008 3:22 PM

Anonymous said...
there are 3 czech pros on my semi-pro team in austria. (we are known for arnold schwarzenegger, mozart and locking children in cellars ..)
these guys earn more money here than in their country.
their english sucks, even compared to mine..
i think i´d love this book. and i´m sure he mentioned the HOT czech women, if not, he wasn´t there.

the european style is indeed "robotic" or i would say boring to watch, compared to the spidermanesque style from the nba.
10/08/2008 3:44 PM

Anonymous said...
I am sure Fromm has plenty of experiences and stories.....I played on a semi-pro team in Hungary. At first, it was difficult to relate with teammates because of the cultural and language differences. Eventually, I learned how to speak Hungarian though.....I made some good friends during my time playing for this basketball team. I even baptized my best friend's son last summer.....However, no matter how hard you try, you are always going to be perceived as a foreigner; and if you are an American, a lot of jealousy comes your way. In this environment, you learn quickly who your friends are and who aren't.

I can tell you one quick story. Once during a game, I had some stomach issues and had to rush to the bathroom to relieve my intestinal tract. It turned out, there was no toilet paper in the bathroom. I had to use newspaper at the bottom of the waste basket in order to clean myself.