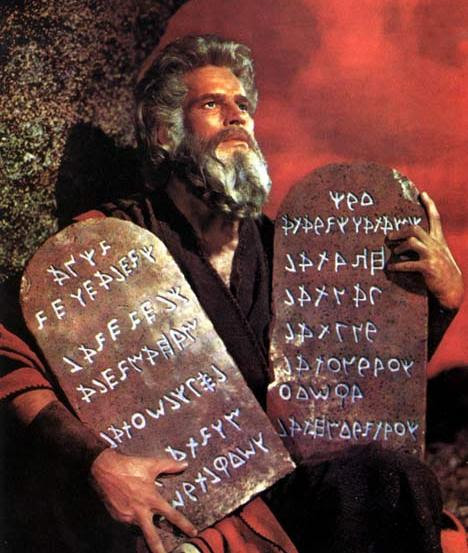 This is the not-very-long awaited follow-up to the original Hacker's Commandments post. In case you can't identify the Hacker in your pickup league, he is the schmuck who makes playing basketball an experience akin to, well, this Weird Al video. They live their athletic lives by these commandments, each of which is ranked on the Basketbawful Douchebag Scale (TM), where 1 is the lowest rating and 10 is the highest. For example:

9. Thou shall always overreact to thy successes: Inspired by cubee: On those rare occasions when they score or make a sound defensive play, Hacker's tend to yell, pump their fists, do the Antoine Walker shimmy, wagging a finger, and/or talk trash. For instance, a few weeks ago I was lighting this guy up and I could tell it was making him angry. Not surprisingly, he mugged me while I was trying to complete a fastbreak layup. Even though he body-blocked me out of bounds, he must have felt this was a clean move since he loudly smacked the ball as well. He immediately starting screaming and flexing like Alonzo Mourning, then yelled, "Get the f*** outta here!" BDS rating: 7


10. Thou shall constantly excuse thy failures: Since the Hacker is like a perfectly-tuned athletic machine with a computer-like brain, they are incapable of making mistakes or missing shots. Or at least they think they should be incapable of those things. Which is why, when they err, you will get a variety of exceptionally creative reasons why. From davidd: "They scream after every missed shot, 'What is wrong with me today! I usually make those!'" From ak dave: "Thou shalt blame the basketball, gym floor, rim, backboard, teammates, Sarah Palin, or anything but thyself for egregious errors thou hast committed. Even in the case of a blatant double-dribble; it was not thy fault." BDS Rating: 5

11. Thou shall play the injury card: From bj: "Would injury-related fuckery count? The guy who (loudly and repeatedly) stresses that he's playing a month after slipping on some ice and straining his knee; includes calling timeouts to fiddle with Ace bandages and swallow aspirins. Square it if they sneer at anyone who actually does go down with an injury, and cube it if that anyone is their own teammate or is hurt by a hard foul they committed." One addition: This also applies to the guys who "tweak an ankle" or something to that effect, hobble around like they can't move for several minutes, then suddenly sprint out on a fast break or pull of some incredible move for game point as if nothing whatsoever was wrong with their injured body part...because, of course, there never was. BDS Rating: 6

12. Thou shall talk the talk without walking the walk: From an anonymous commenter: "Thou shalt shit-talk incessantly, even when thou hast done nothing to improve thy team's lot. Hackers are often the ones talking the most shit, acting the most smug after winning, basking in a glow of superiority, even though they've scored one basket all game. On a cherry-pick layup. Which rolled around the rim three times." BDS Rating: 6

13. Thou shall cherry pick: Quick question: Am I the only person driven to a near-homocidal rage when somebody cherry picks? Especially when they follow it up with an excessive celebration, ala Commandment 9. If I suddenly stop writing for this site, Footbawful and Deadspin and nobody hears from me, chances are I am either in prison or awaiting trail for the murder of a cherry picker. In which case, please start baking my cake-with-a-file in it immediately. BDS Rating: Anywhere from 1 (if the Hacker's team is getting blown out and the point is meaningless) to 10 (on game point of hotly contested games)

14. Thou shall scam thy way into games: From ak dave: "Thou shalt always have 'next' regardless of when thou arrivest at thy gym. Upon losing, as it was clearly not thy fault, thou shalt have 'next' anyway." Personal anecdote: This tactic became so popular at my gym that the beginning of every game was preceded by a five-minute argument about who actually had next. The gym manager finally posted a signup sheet, which actually eradicated the practice. Who knew a simple piece of paper could have so much social power. BDS Rating: Anywhere from 4 (if there aren't many people present) to 10 (extremely crowded gym with many people waiting)

15. Thou shalt wear an excess of protective gear: From five pound bag: "Hackers come to the game with a duffel full of ankle braces, knee pads, shooting sleeves and two pairs of Rec Specs (one indoor, one outdoor) and spend ten minutes putting all that crap on while explain why they need it ('Yeah, strained my Achilles a couple years ago when I was fighting through a screen -- total moving pick, had to call the foul on that -- but I can't change the way I play, it's the right way, fundamentals man, fundamentals...' etc. etc.)." I have two words to explain this phenomenon: Battle armor. BDS Scale: 2

16. Thou shall respond to thine mistakes with berserker rage: From brandon: "There is an undeniable law under the heavens that states that when a douchebag gets blocked or gets thier pocket picked, they suddenly turn it into supreme overdrive and run around frantically trying to re-steal or re-block from the very opponent who has embarrassed them. This usually leads to them tripping and/or fouling. Frequently, it ends in an injury, where they limp off the court. Note: This phenomenon can also be triggered by a blown lay-up." BDS Rating: Anywhere from 5 to 10, depending on the severity of the rage and how long it lasts

17. Thou shall loudly call "And one!" to declaim every foul: From ben: "I hate that. You have to actually make the FG to get an 'And one!" you numbskull. And since we don't shoot free throws in pickup ball, technically there is never an "and one" situation. So shut up, you hack." Agreed. I've made my feelings on this subject known. BDS Rating: 8

18. Thou shall emulate this guy: This is for you, fluxland. BDS Rating: 10

Stu Holdren said...
This just gets better and better! I cant stand the "And 1" calls, or even worse, the guy who calls "SHORT!" after every shot.

Or how about the terrible scrubs that wait under the hoop after the other team has scored because, of course, they are going to be the point guard on this squad.
9/18/2008 12:18 PM

Wade Word said...
Yes, I hate the faux And 1. The only way to do it is if you are taking a shot, get fouled, call foul, then make the bucket.
Or, after making a bucket on which you were fouled, you can calmly say, And 1.
It also makes little sense because I know of no pickup games that shoot freethrows or have foul limits.
9/18/2008 1:11 PM

B-Will said...
A couple more jerk-off things to do.
1. Call line on every three point shot no matter how far behind the line the guy is. It can be an amusing mind game but usually it just proves you are a douchbag.

2. Calling short, hard, long or anything else that the other team throws up whether the ball goes in or not. Peaple think they are being helpful predicting where the rebound will go to their teamates, but it is just some dickery, if not superdickery.

Also, some of these things are just jerk-off rules, not necessarily hackers. Hackers usually have quite a bit of effort in their game, and some guys are lazy hacks, who can't qualify as hackerz.

Anonymous said...
Can someone fill me in on the reason some guys always play with their shorts half falling off? Is this to attract the non-existent women on the sidelines? Like I want to see some dude's compression shorts (or worse).
9/18/2008 3:33 PM

Maybe this is me not paying attention to the game, but a lot of the things that bug me are the style things. My favourite was the dude who had a bald spot and would play in a touque. You know you're in Canada when...
9/18/2008 4:27 PM

Unknown said...
I'm a big fan of people that can't dunk, but try to pretend like they dunk. Specifically, there was this one guy who would lay the ball up and then grab the rim afterward. Except that most of the time, grabbing the rim after laying the ball on top of it would cause the ball to roll off and miss.

Stephen Robbins said...
People who accessorize on the court should not be allowed to play. Big fake-diamond earrings, gold chains, the occasional baseball cap, etc. That's almost as bad as the occasional douche bag who shows up to play in jeans.
9/18/2008 8:55 PM

Anonymous said...
Question for you guys, I've been playing with this one guy who always yells out "TRY!" when he's taking a trey or "IN!" when he's shooting near the basket. Probability of his shots going in, miserably less than half. Would he count as a hack, or just plain stupid?
9/20/2008 5:11 AM
Post a Comment
<< Home
Subscribe
RSS Feed
Mailing List