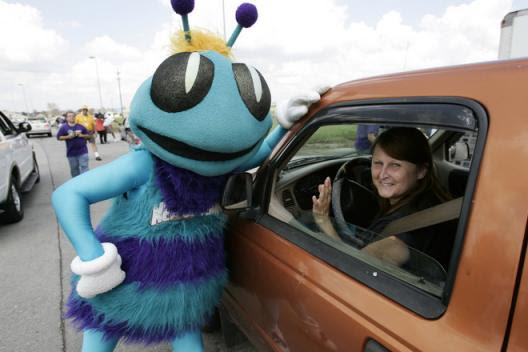 You can expect a more elaborate and thorough set of previews in October, but for now, here are my gut feelings about the upcoming NBA season, vomited up in glorious Basketbawful-o-Vision!

Atlanta Hawks: Fact: This team will not be crippled by Josh Childress' defection to Greece. Rather, they will be crippled by the fact that they are still and will always be the Atlanta Hawks. I guess what I'm trying to say is the Hawks are the East's answer to the Clippers.

Boston Celtics: Will Darius Miles be more like the 1985-86 Bill Walton or the 2007-08 Darius Miles? It could be the former but I'm betting on the latter.

Charlotte Bobcats: They are one "unbelievable breakout season" from Adam Morrison away from contending for 40 wins.

Cleveland Cavaliers: I'm sorry, but the arrival of Mo Williams -- a.k.a. "The Second Coming of Larry Hughes" -- changes nothing except who gets to stand around on the perimeter waiting for LeBron to kick the ball back out.

Dallas Mavericks: Quick quiz: Who is more mobile at this point, Jason Kidd or Stephen Hawking? Think about it before answering.

Denver Nuggets: Get ready for this mindbender: The Nuggets could actually be worse on defense this season. And replace "could be" with "most definitely and positively will be."

Detroit Pistons: I'm not sure yet whether they'll lose to Boston or Cleveland in the Eastern Conference Finals. I could be totally wrong about this, though. They might lose to Philly instead.

Houston Rockets: Adding Ron Artest to this team is like watching a Mad Scientist mix random chemicals together. Maybe he'll create Wonderflonium, maybe he'll destroy us all. Could be the former, but I'm betting on the latter. Plus, there's no way Yao is staying healthy all year.

Indiana Pacers: You know how the people of Chernobyl are still suffering horrible aftereffects of the nuclear disaster that happened all the way back in 1986? Well, Ron Artest was the Pacers' Chernobyl disaster, and the effects are still being felt to this day.

Los Angeles Clippers: Suggested team slogan for this year's Clipper team: "We are who you thought we were."

Los Angeles Lakers: They sure look like champions on paper. And I'd like to wipe my you-know-what with that paper.

Memphis Grizzlies: The arrival of Marc Gasol could very well mean an additional five wins, which would actually be a pretty big deal for the Grizzlies.

Miami Heat: Do you suppose Pat Riley would have stepped down -- or up, or whatever you want to call it -- if he'd had any idea how D-Wade was going to play in the Olympics? Yeah, me either. Expect a 25-game improvement and a dramatic first or second round playoff ouster.

Milwaukee Bucks: They have enough talent to trick some people into thinking they'll be halfway decent this season. Don't be one of those people.

New Jersey Nets: Following this team will be like watching over a brain-dead relative sucking on life-support.

New Orleans Hornets: The won the James Posey lottery, but something tells me they're not quite ready to win it all yet. Also, they will go into a short slump around Mardi Gras.

New York Knicks: D'Antoni's "fun 'n gun" will be more pleasing to the eye than Isiah's "shamble 'n suck," but with Chris Duhon leading a squad that still includes Zach Randolph and Eddy Curry, I can't see the end result being that much different.

Oklahoma City Thunder: I refuse to acknowledge this team's existence. The "Win" column in the season standings will likely do the same.

Philadelphia 76ers: For some reason, I'm just not getting as excited about the Sixers as everybody else seems to be. Yeah, they got Elton Brand and all that, but something just feels...wrong...to me.

Phoenix Suns: Can I just say up front that I will personally hunt down and murder -- slowly but brutally -- every blogger and sports writer who uses a headline about this team that includes any variation of the words "sunrise" and/or "sunset." I am so not kidding about this.

Portland Trailblazers: I just get this weird feeling that waiting an extra year for Greg Oden's "rookie" season is going to be like waiting an extra week to open your Christmas presents and finding out all you got was a new winter coat, socks and underwear. Sure, you needed all that stuff, but...

Sacramento Kings: They will give you very few reasons to care.

San Antonio Spurs: Their string of every-other-year championships is over. Trust me on that.

Toronto Raptors: Jermaine O'Neal is not the answer. He just isn't.

Utah Jazz: They will be every bit as good as they were last season...during which they lost in the Western Conference Semifinals. That's right: It's Groundhog Day 2, starring the Utah Jazz!

Washington Wizards: Sure, they resigned Antawn Jamison and Agent Zero, but are they really any better than the teams that lost to the Cavaliers in the playoffs the last three years?

KNEE JERK NBA said...
'Oklahoma City Thunder: I refuse to acknowledge this team's existence. The "Win" column in the season standings will likely do the same.'

Anonymous said...
How about a poll to predict who will miss more time this season due injuries?

The Author said...
So, it looks like you see every team being a little bit worse than they were last year. Is there any team that you see promise from? Only the Cavs appear to advance in your predictions further than last season. You took the easy road by dissing all of them.
9/17/2008 1:27 PM

Basketbawful said...
jake -- Let me clarify my position. I think the Hornets will be better, but not better enough to win it all. Yet. The Lakers look like champs...and I'm not happy about it. The Blazers will be better, too, just not worlds better. Philly will no doubt win more games, I just don't think they're true contenders. Keep in mind these are all gut feelings, not in-depth analysis.

Dima said...
I think Philly is missing that quintessential white guy that teams loaded with athletes need to inject some fundamentals and settle things down in crunch time.
9/17/2008 1:56 PM

Victor said...
Great. With Wade back and Philly improved, my lowly Hawks aren't sneaking into the 8 seed as a sub .500 team again.

Wow Arenas AGAIN? Is he pulling a Shaq and partying in the offseason while saving the rehab for company time?
9/17/2008 2:15 PM

You mean like Jason Williams for the Heat in '06? Oh wait... his game is more street than D-Wade's

But surely you must mean Manu from '07, because he is "Mr Fundamental" (/sarcasm)

No no, you must mean Brian Scalibrine for Boston this year! Oh wait... didn't play...

Seriously, by "athletes" do you mean "black people"? And are all white players "fundamental"?

Dunpizzle said...
To anonymous - maybe he means the token white guy. Not necessarily one of good fundamentals, but the fan favorite. Mark Madsen is that guy.

To Baguete - I would say Shaq, but not due to injury, at least not in reality. They will start the season 4-11 and Shaq will have an injured upper thigh bruise and miss 4 months. As for real injuries, none of the above. Arenas is out until Jan. He says Dec but they said Jan is more likely. But he will try for Dec and get hurt once again.
9/17/2008 8:40 PM

This is basketbawful, not basketwonderful. If you want happy, optomistic projections with flowers and rainbows, there are plenty of sports sites out there
9/17/2008 9:49 PM

Wade Word said...
I love the snark and all, but it looks like no one will win this year, according to this pre-cap.
The slightly-better Griz v. the toiletpaper champion Lakers in the West, I guess?
Hmm. Can't wait to by my season tix.
9/18/2008 8:25 AM

Oh really? Seems to me that Mo, like Larry Hughes before him, arrived in Cleveland as a shoot first, second and always guard who inflated their numbers on sub-par teams. Larry, like Mo, was supposed to take some of the offensive burden off of LeBron James' shoulders. But Larry, like Mo, relied too much on having the ball in his hands. Neither player does a great job creating for others, and neither players is much of a spot-up shooter. Mo's three-point field goal percentage is higher than Larry's, but not that much.

Anonymous said...
I would visit a site called "Basketwonderful", but I wouldn't leave before posting some truly snarky comments of bawfultude.
9/18/2008 9:30 AM

Anonymous said...
@ baguete: man, you haven't been following the NBA right? AI ALWAYS plays through each and every f*cking injury he suffers. shut up.

kibitzer said...
San Antonio Spurs: Their string of every-other-year championships is over. Trust me on that.

Anonymous said...
Lakers were 2 games away, actually 1 1/2 games away (damn 2nd half meltdown in Game 4) from winnin the NBA title last year...and that was all without Andrew Bynum...
now that Bynum is back and better than ever