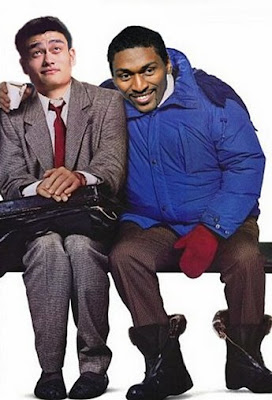 Following the trade that sent Ron Artest to the Rockets, Yao Ming was understandably concerned. Sure, Artest is talented and all, but this is a guy that has been known to beat up fans for throwing cups of water, demand trades at random intervals, threaten to retire to promote album sales, and sport some pretty horrific hairstyles. Rockets fans in China were a tad worried as well. Here are some very poorly translated excerpts from Chinese fan sites...

"I can understand from the rocket urgent urgent 'Yao and McGrady (Tracy McGrady) era' has never been able to break through the first round of the playoffs Curse of the situation."
-blog.roodo.com/nbaalong

"Although headed center Yao Ming also agree that the team will increase the combat capability, but also worried that the rocket team atmosphere may be affected."
-yam.com

"This is the player the Rockets need most is my favorite type, a personality. McGrady is the soft egg, and Yao Ming are often trapped in the physical character in the East, which is why the Rockets are always tough but dry, not a first round of the playoffs."
-justmiddleit.com


All similarities between T-Mac and dairy products aside, Maggie Rauch over at Shanghaiist.com pointed out that, before Yao Ming came to the NBA, he's partnered with some short-tempered derelicts himself.

"It should be noted that the guys Yao is playing with right now — the Chinese national team — have also been known to throw some blows when things get heated on the court. The team was involved in a fray in a game against Lebanon at the 2001 Asian Championships in which Li Nan, who is still playing with the national team, reportedly brandished a pair of scissors. Yao was on the bench at the time and not involved in the fight. More recently, and documented with video evidence, China had a good dust-up with Puerto Rico in the 2005 Stankovic Cup."
Here is the video of the Stank Cup brawl. You'll notice that, shortly after the fight, Team Puerto Rico grabbed their stuff and got the hell out of there, essentially ending the game. Wait, isn't Puerto Rico one of the most dangerous places in the world? And all it took was a pissed-off Yi Jianlian and a few fans throwing garbage to send them cowering? I'm so disappointed.

1 - You NEVER fight a chinese, specially a seven-foot tall chinese. You never know how much kung-fu he has learn as a child.

2 - Why people make so much fuzz about the Pacers/Pistons brawl? Its a competitive sport, very physical and of course there will be fights now and then. If you dont like fights, go play volley or tennis.

Hey, a chubby white guy threw a glass on the court. Of course he should be beaten up. Thats the second thumb rule of nature: Dont ever mess with a bigger guy. I am with Artest in this one.

I can imagine the stupid fella that threw the glass: "hey, I am gonna throw this on Artest and he cant do anything about it!". Man, somebody should brake both of his arms. If only this game were played in Singapore...

3 - Why people make so much of Artest? He´s barely an All-Star. I cant see him as a team leader or as an offensive threat and I dont think he´s that good defensively. If he is your third best player, you still are not a contender.

Dunpizzle said...
The last time Artest was the 3rd best player on a team(O'neal, Miller), that team was a favorite to be in the Finals. I won't necessarily call the T-Mac soft. He did have to go 1 on 5 during the playoffs while not getting 1/10 the calls Kobe gets. Definitely no thug or hombre, at least not anymore.

Artest is exactly what the Rockets need. Aside from Rafer Alston, the entire team is full of nice guys and boy scouts. Yao and Battier are the type to help an opponent get up after being knocked down. What kinda shit is that!? With Artest we can expect a few more elbows and shoves instead of smiles and buttslaps.

And look at this video. After seeing this how can any Rocket fan not love him on the team. Especially at the 4min mark, that's what it's all about.

KNEE JERK NBA said...
People forget that prior to The Palace brawl, the Pacers had the best record in the league.

And Ron Artest was not only their best player but an early MVP candidate.

His time spent in Sacto was more or less uneventful but he's still got the talent to be first team All NBA.

Anonymous said...
I have lost all respect for Puerto Ricans.

The Boriquas shamed their country and themselves by getting run out of the building by Yi Jianlian. They could be the biggest pansies in the HISTORY OF WESTERN CIVILIZATION!

...except for Carlos Arroyo- I'm sure he had a knife on him, just waiting...

Maybe the Rockets need Sir Charles to come out of retirement? If nothing else he could sit on the bench, pound Patron, talk shit, and throw MF's through windows. Isn't that pretty much what they're missing on that team?

Anonymous said...
Of course its a steal, they are getting Artest for nothing, but I dont think they are contenders.

Do you think the Rockets will be able to win 22 in a row with Artest on the team?

Anonymous said...
Low-cost Artest for rockets is a great deal. Look, they can't get out of the first round. They need grit and skill, and Artest has both. Provided he's doesn't wreck them, he could take them to the next level.
8/18/2008 3:04 PM

Anonymous said...
Sorry for the pedantism, but wasn't the cup thrown at Artest in the Malice actually full of beer, not water? Is there someplace where you can factcheck these kinds of things?
8/18/2008 4:15 PM

I believe it was beer as well. What self-respecting Pistons fan would drink WATER??

Also, I think that same beer that was tossed saved a life- When Jermaine O'Neil threw that haymaker at that short mexican-looking guy's face, he slipped on said beer, causing the blow to glance off the guy's face instead of landing squarely- that was a haymaker that would have surely separated head from shoulders if it had connected.

Anonymous said...
As someone who has competed against a Chinese National Team, let me tell you that they are as dirty as f**k. I think Yao tends to dilute their image but I'd say he was the exception not the norm.

Any country where sport is a pathway to a much better life tends to breed some bastard sports people, at least during play (I'm looking at you eastern european countries).

As someone from an affluent western country I know first hand I don't care enough to beat some people. I can be much better than another athlete at the sport, but if he grabs my balls he has just expanded his repitoirre of moves to a place I can't ever go...
8/18/2008 9:32 PM

Anonymous said...
Yes it was beer that was thrown on Artest. Watch replays and you'll see the liquid is brownish and thus we can conclude was most likely beer. Unless it was Bud Light, because that is basically colored water.
8/18/2008 10:03 PM

Anonymous said...
I believe JR has a point: Yao Ming is a nice person but he does not represent the Chinese team or most Chinese b-ball players.

I have lived in China for over 10 years and I stop going to CBA games in 2000 because there was too much fighting. Every game I attended a game, I would see more fist fights than an NHL game. (Yes, I'm Canadian).

I have also seen hometown crowds getting on the floor to try to deliver a beating on the opposing team.

China is lucky to have Yao Ming because most of the other players would labeled as "thugs" in the NBA.

My view:send more players abroad and stop nurturing in a false stardom system.