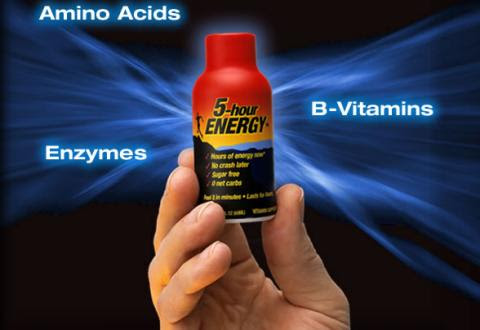 A few months ago, I was in a checkout lane at the local Dick's Sporting Goods standing behind a woman with a shopping cart full of baseball supplies: Bat, glove, batting glove, a helmet with a faceguard, and a variety of other miscellanea. I think there was even a jockstrap in the pile, but it gave me chilling memories of sixth grade gym class, so I immediately blocked it out.

I figured she was a Little League Mom, and I was right because her demon seed showed up with an armload of these red, black and yellow bottles. The label read 5-hour Energy. He spilled the bottles into the cart -- there must have been at least a dozen of them -- and his mother immediately blanched. The following conversation ensued:

Kid: [Stamping his little foot] "Yes I do! I have five games next week and I need two per game or I can't play!"

Mom: [In a whiny voice] "But I don't like it when you take two at a time. You get all jittery and then you're up all night..."

Kid: [Balling his fists and scrunching up his face] "Damn it, mom!"

Kid: [Grabbing up the bottles out of the cart] "Screw it, then! I'll buy them myself!"

This exchange made me think two things. First and foremost, that I loathe bratty kids and the parents who let them misbehave. (Seriously, if I ever go on some kind of bizarre rampage, it'll likely be the result of one too many whacks to the head by a kid's water noodle at the local pool, or maybe because some little rascal kept hitting me in the face with a basketball while I was trying to shoot around at the gym.) Second but still significant, what kind of a world do we live in when an 11-year-old kid needs a double-dose of performance enhancement for a Little League game?

You know, when I was 11, I had 5-hour Energy, too. It was called puberty. I woke up on my own at around 5 a.m., spent the day in an endless loop of constant activity, and then I'd still be up half the night fantasizing about Julie Newmar. (With all due respect to Eartha Kitt, Julie was and will forever be my favorite Catwoman. And I'm sorry, but Michelle Pfeiffer and Halle Berry aren't even in the discussion.) I had more than enough pep for those brutal, daylong games of dodgeball, "smear the queer" (the sole goal of which is to take turns getting gang-tackled into a bloody pulp) and -- my personal favorite -- "climb as high as you can up a tree and then jump out." So why do today's kids need an artificial energy boost to play a game where you spend most of your time just standing around? I don't get it.

Still, I was mildly intrigued, and when I saw a 5-hour Energy display at Walgreens a few days later, I bought a bottle (it's about $4, by the way). 5-Hour Energy is different than Red Bull and other so-called "energy" drink in that it's not a mega-shot of caffeine and sugar. (There is some caffeine, but only about the amount you'd find in the average cup of crappy office coffee.) 5-hour Energy is mostly just a super dose of B-vitamins (like 8000% of the daily recommended allowance) and amino acids (the building blocks of life!). The bottle promised that I would get a solid burst of prolonged energy without the typical side-effects associated with most energy drinks: Namely, the initial shakes and the eventual "crash effect" (where you suddenly feel like all the strength has been sucked mercilessly out of your body).

I decided to use a bottle before going to play in my weekly pickup league. I had no idea how much time was required for the 5-hour Energy to take affect, so I drank it about a half hour before I left. That gave me time to sit down, relax and note the immediate effects. Within a few minutes, I started to feel a little flushed. Not jittery or anything, but it felt like my blood was flowing faster than normal...as if my heart rate was up (but only slightly). I also started to feel more focused and alert. I wasn't bouncing off the walls like I am after downing a Red Bull, but I was definitely energized.

I went to the league and played well, although I didn't really feel like it was an "enhanced" performance. Other than the increased alertness, which may or may not have helped me limit my turnovers, I think the energy boost was fairly negligible. Maybe if I'd been really exhausted going in it might have done more for me.

As an aside, my friends and I have discovered another valuable use for the 5-hour Energy. A group of us took it one night during a major bender, mostly so that we'd be able to stay up and drink longer. It certainly accomplished that feat. We closed out the bars and nobody fell asleep on the long drive back from downtown Chicago to the suburbs, which is a trip that usually results in most of the car passing out. (Don't worry; we use a designated driver.) And the post-drinking burritos never tasted so good, although, admittedly, that might have had more to do with the beer than the 5-hour Energy.

More importantly, nobody suffered a hangover. Not one of us. We didn't even get our usual case of group beersomnia. And mind you, one of my friends, G-Man, regularly suffers the worst hangovers known to man. No, really. He almost always ends up with a terrible migraine and spends the following day throwing up and crawling around in agony. That has not happened once since he started using 5-hour Energy in preparation for a night out on the town. Conversely, he has endured his typical hangovers the few times he has either forgotten or neglected to use it.

So 5-hour Energy (probably) won't improve your game, whether it's basketball, little league, or backgammon. But it could allow you to drink to excess without repercussions. And that's no small thing.

Anonymous said...
@ddc: Amen bro. I knew the system so well that those bottles would never have appeared in the cart. Had I tried to sneak them through, either parent would have given me a "look," and uttered the ultimate monosyllable: "no." Any further efforts would have gotten me grounded (though because both of my parents are of German descent from the Nebraska hinterland, they always said "campused," which drove me nuts. It was so uncool.)

As for this kid, kill him before he gets old enough to vote. And kill both of his parents to make sure they are out of the gene pool.

@ Bawful: Yes man. Smear the queer. I get a PC guilt trip even saying that name (are we endorsing homophobic beat-downs a la Matthew Shephard?), but I played that game non-stop. Absolutely awesome play for a growing boy.
8/22/2008 11:53 AM

Anonymous said...
I'm going to disagree with the *no* repurcussions bit. Endless drinking may result in loss of shame, regrettable one-night stands, jail time, and strange men asking to take pictures of your junk.
8/22/2008 11:58 AM

ddc -- You said it, man. I purposely avoided references to my upbringing, but seriously, kids are not disciplined anymore. And parents seem to get really pissed if you tell their kid to settle down when they're running amok all over you. The prevailing attitude seems to be that the entire world should be a child's playground and adults should happily make way.

wormboy -- You know, I was actually mildly nervous about using the actual name of smear the queer, but that's what we called it. And I don't remember anyone ever actually bringing up gayness. Probably because most of us were bleeding from the mouth.

Anonymous said...
This is why I never get a hangover when I have a night on the red bull & vodka or Red Bull & Jack Daniels.

It's awesome. Incidentally, downing a couple of painkillers and a pint of water before you go to bed after a night out and then the same when you wake up does largely the same thing as most headaches in hangovers is caused by dehydration.
8/22/2008 1:34 PM

Victor said...
I hate kids like that. One of my cousins is one of those spoiled brats. Seriously, he's a demon child. Completely disrespectful to anyone. He'll pick up the phone, yell at whoever calls (like someone looking for his dad), and hang up. I forgot what he did, but we were at a restaurant with our grandma and he ended up pissing me off. I picked up a chair and pinned him to his seat and basically asked him what the hell his problem was. He ended up crying so hard he puked all over the restaurant floor. Yeah, I sure looked like the asshole, but he deserved it.

BJ said...
(jots) Thanks man, that's a very valuable piece of information to have. My club is only open on Thursday and Sunday nights. I went last night and now I feel like I woke up under a train wreck (and that's with four cans of Red Bull and a dozen Advil). What dosage do you use; just one bottle prior or one every couple hours or what?

And re the kid . . . who the hell has him believeing that he needs performance enhancers to play a goddamn game of Little League? I see in his future many many trips through detox, coin-toss if it's from amphetamines or cocaine.
8/22/2008 3:42 PM

Anonymous said...
i would have slapped that kid down right in front of his mom, for being a stupid brat

Unknown said...
Hahaha, I literally laughed out loud at the "it's called puberty" comment! Kids that young aren't supposed be to drinking that kind of stuff... 5 Hour Energy is alright, but it's all about 6 Hour Power. Have you ever tried one of their energy shots?

They come in 5 different flavors, don't have the crash or make you jittery, and are pretty cheap. Check them out at www.6hrpower.com

I work with them, so if you have any questions about them let me know. I'd like to hear your thoughts on our drink.

By the way, great blog. I remember reading on Forum Blue & Gold about your blog is the funniest basketball blog... they weren't kidding. (Go Lakers!)

Tonewise said...
i think the real question is, does it have the same effect if u drink it in the morning after a heavy night out... some of us may not want any more energy the night of... im just sayin.

Damirez said...
After I got over wanting to hit whoever that kid was I tried the 5 hour energy as a hangover preventative... worked like a charm. Unfortunately, it was tough sell to my friends.
"Hey, I got a new hangover cure to try."
"Where did hear about this?"
"Umm... on a basketball blog. But it works! Promise!"
8/25/2008 8:56 AM

Unknown said...
@Crom, 7 minute abs is kind of nice if you're looking to work out, but 6 Hour Power's little energy shots are great to take whenever you're looking to get some energy (and at whatever time of day). I have a friend who went to a Radiohead contest in San Francisco a few days ago and drove back to LA the same night. He took a shot of 6HP to help him stay awake and it worked. These things really do work.

By the way, shoot me an e-mail if you want to hear more about a 6HP contest going on where you can win a PS3 or Xbox 360 (your choice). Right now there are less than 220 entrants so you've got to like your chances.