A friend and I were watching Team USA take on Spain last weekend when I noticed Chris Bosh groping the absolute living hell out of Rudy Fernández's butt during a blockout attempt. My friend immediately said, "You've got to put that on your site." But I hadn't TiVo'd the game and I couldn't find a picture of the grabtastic moment anywhere online. So that, it seemed, was that.

Enter Basketbawful reader Ray, who sent me the screen capture. 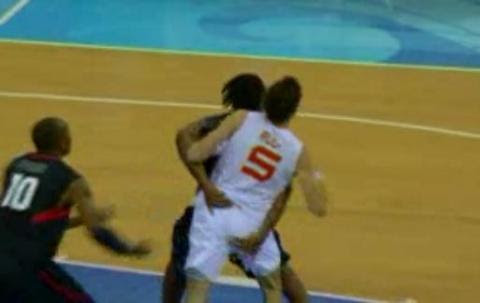 Dwyane Wade recently noted that he (and the rest of the Redeem Team) are able to go balls out on defense because, at most, they're only playing around 15 minutes a game. Which is true...to a point. But take note, it also helps that the international rules allow for a lot more grabbing and clutching than the NBA does these days. And this butt-hug was a direct result of that. Is it any wonder that Team USA is enjoying so much success? If one team is bigger, stronger and faster than all the other teams, and they can use that physical superiority to their best advantage, what else would you expect to happen?

Unknown said...
Rudy was called for a pushing foul on that play. The cap makes Bosh look bad, but the reason he's reaching around, pardon the pun, is because Rudy was literally trying to mount Bosh to get out of being boxed out.