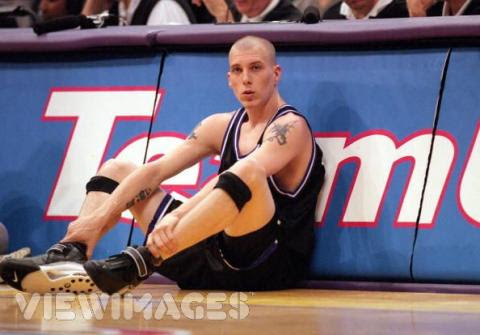 The Redeem Team, besides that whole "restoring American basketball dominance" thing, proved to be excellent ambassadors during their stay in Beijing. I bet David Stern couldn't have been happier unless there were two of him. (Not an implausible notion, and it would explain a lot, but I digress.) Still, the overwhelmingly positive Olympic experience reminded me that there have been other not-so-great moments in NBA international relations. To wit:

On February 28, 2001, the Sacramento Kings visited the Golden State Warriors and ran way with a 122-101 victory. But what they won on the court was soon lost in the ensuing public relations nightmare: Sacramento point guard Jason Williams had gotten into a shouting match with some fans during the game. A particularly nasty shouting match.

The fracas started when a man named Michael Ching, who was sitting behind the Kings' bench, told Williams to "Get used to sitting on the bench." White Chocolate, known far and wide for his clever eloquence, responded with: "Are you gay? Are you a fag?"

Since it was entirely possible that Ching did not, in fact, prefer penis over vagina, Williams moved on to the next best thing -- racial epithets! -- calling Ching a "slant-eyed [bleep-bleeper]" and and saying that "I will shoot all you Asian [bleep-bleepers]. Do you remember the Vietnam War? I'll kill y'all just like that. Just like Pearl Harbor, do you remember that?" Then, to underscore his rather statement (which was rather dubious, historically speaking), Williams pantomimed shooting a machine gun at Ching and even made machine gun sounds with his silly mouth.

Unbelievably, the immediate followup to this confrontation was a visit from an arena security guard, who threatened to remove Ching and his friends from the game, claiming complaints had been made against Ching for the incident. Understandably outraged, Ching demanded to speak with someone from the Warriors' front office. He had to wait until the end of the game, but he finally got to speak with Robert Rowell, the Warriors' vice-president of Business Operations. Rowell promised that "something would be done."

More than a week passed before Rowell got back to Ching. I bet Ching was expecting some sort of heartfelt apology. What he got instead was a stern reprimand for sending out the letter. According to Ching: "[Rowell] said, 'You know I don't appreciate you doing this, going to all this stuff."

Meanwhile, the story had hit the press...and Williams was completely unrepentant. "People say all types of things to me, curse words, talk about weed, everything. They can get personal with me, but I can't get personal with them, I guess. Hopefully, I'll learn my lesson one of these times."

And still no action was taken by the NBA front office. I know it seems hard to believe, since we live in an era in which players are punished for standing up off of the bench and Kobe Bryant has been suspended twice for accidentally smacking people in the face during jump shots, but it's true. Another week passed before the league finally took action, fining Williams $15,000. In response to the fine, Williams issued a written statement with a canned apology that was dripping with sincerity: "I did not intend any disrespect to the Asian community or any other community. I was wrong and I apologize."

Somewhat ironically, this incident caused Nike to cancel a Williams-centric advertising campaign which would have digitally altered the color of Williams' skin from white to black. (Said Nike spokesman Scott Reames: "The premise is that there's no black basketball and no white basketball. Jason's point is, 'I play basketball; it doesn't matter what color my skin is.'") Nike, of course, claimed that the decision was made before the Ching controversy. That's Nike for you.

It's unknown whether the league forced Williams to attend a diversity training workshop, but rumor has it that Shaq left a message with his agent that said: "Tell Jason, 'ching-chong-yang-wah-ah-soh.'"

Michael said...
The best part of this whole entry is that last line. I realize the inherent irony in asking this, but... is that rumor true? What I mean by that is, is it really a rumor you've heard, or is it just a humorous throwaway line to end the post? If it's true, that could (and should) go down as one of the funniest things Shaq's ever said, and he's been full of it. (Word to the double entendre.)
8/27/2008 10:01 AM

Basketbawful said...
michael -- That is an actual Shaq quote, but it has nothing to do with the Jason Williams incident. Shaq actually made that statement to a reporter about Yao Ming, and there was a big brouhaha about it. So my use of it was merely tongue-in-cheek.
8/27/2008 10:05 AM

Yep. Vietnam, one of USAs crowning achievements. And we sure showed the Asians whose boss at Pearl Harbor.

Justin Tenuto said...
W Mac/Anon beat me to it. Jason Williams, apparently, did not major in US History. Or take a US History class. Ever.

Unknown said...
Well this is closer to an Olympic blog. So are you writing on deadspin anymore? and if so where? That old link ended with the NBA season.
8/27/2008 3:44 PM

Anonymous said...
Is Jason Williams a dumbass for what he said?

But you know, he was young in Sacramento, and he obviously never had a lot going for him upstairs outside of basketball, so I could see how a young, immature NBA player could be provoked into a verbal melee with fans that ended in racial/sexual slurs.

Yeah he's a dumbass, but I think lots of young people would react in much the same way, and if you ask me, hecklers are equally (if not more) as asshatish as the players who reply to their heckling.

What if Jason Williams came into that guy's office and said ,"Hey Ching- get used to filing those TPS Reports because you'll never make manager at Initech with a stapler like THAT!!" Or ,"Hey Ching! You call that an expense report?? No wonder you have the smallest cubicle in the building!"

That would be pretty effed up, right? So why do people feel it's OK to talk down to people who are obviously VERY good at their jobs? (face it, Williams could/can still ball well enough to play in the NBA).

I'm not saying Williams should be excused for that garbage, but hey, it was in 2001, he was YOUNG, and let his mouth run off without thinking first. Stuff happens.

is getting heckled at your desk part of your work? I doubt it
(maybe during your performance evaluation you get smoked and put down)

but it's part of basketball. there's no fans in an office. you don't get cheered on you don't get booed on. they're two VERY different professions and you can't compare the two

if you can't take heckling when your job is to perform for an audience you really shouldn't be there in the first place
8/27/2008 9:11 PM

It's not that I condone what Jason Williams said or anything, it's just that I have a hard time imagining anyone being "Outraged" by someone as stupid as Jason Williams. More than anything else I think this makes the Kings look bad for not immediately giving the dude tickets to something at the arena because "our security guard messed up".

Seriously a 21 year old basketball player said something REALLY stupid to fans during a game. Color me shocked.
8/27/2008 9:29 PM

Anonymous said...
Yeah, he was young and he's an idiot. I have no problems with players giving fans as good as they get. That's part of the fun of the game, but resorting to homophobic and racial slurs? That is simply unacceptable, ever.

When I was in high school (not too long ago) another idiot chose to call one of his fellow students by a racist term. You know what happened? He had to be sent home because the entire football team was waiting to kick his ass.
8/28/2008 5:15 AM

Anonymous said...
Anonymous, sure and I even understand that in the context... but seriously this is Jason Williams here... I mean next you're going to tell me Jason Kidd might have offered his phone number to a female fan, DESPITE BEING MARRIED.....

It's not that it isn't sad, it's just that its not suprising at ALL and therefore isn't hysterically funny.

I assure you if David Robinson absolutely lost it and said all the same things, I'd be rolling in the isles...