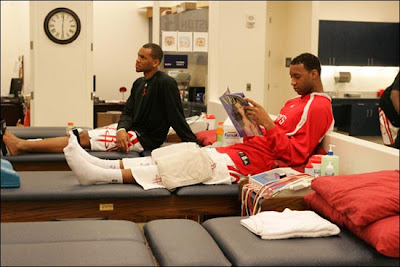 Are you wondering exactly why Tracy McGrady was left off the All Star Team? It's not a snub of Manu Ginobili proportions like you might suspect. Snubbed or not, T-Mac had no intention of setting foot in the Big Easy since day one.

Rewind back to 2007. New Orleans was announced as the location for the 2008 ASG, and Tracy McGrady immediately wanted nothing to do with it. And based on the increase in violent crimes in New Orleans and the shitstorm surrounding Las Vegas '07, it was somewhat understandable. Whether he watched too many depressing Spike Lee documentaries or had a bad experience with a Frozen Hurricane and a drunk college co-ed we're not sure, but I wouldn't rule it out.

Fast forward to January 2008. The All Star Game is right around the corner, and Tracy McGrady has a firm grip on the second guard spot in the West, with nearly 10% more votes than the third place Allen Iverson. Suddenly McGrady, with his paltry 22 ppg, 5 assists and 5 boards a night, wants to surrender his spot to a more deserving player, which the rules won't allow.

Then, later that same week, T-Mac cites a nagging knee ailment that, although it ain't so bad now, may cause him to shut it down four weeks from now. Despite the fact that, since that debilitating knee ailment occurred, McGrady is still playing 36 minutes a night and has missed only one game (out of 11). And that one game was missed with flu-like symptoms! Something's fishy here.

The NBA heard T-Mac's waambulance and quietly scratched him from the ASG altogether. But don't ever expect them to say that. The official NBA ASG site shows that, over a 10 day period after paper balloting was closed, Allen Iverson mysteriously surged and overcame the 10% deficit and won by a measly 0.9% (10,400 votes). Despite the fact that T-Mac started in 2006 and 2007, the reserve selection committee also took the hint and decided to let Tracy "rest" and ice down his sore vagina knee, ending his seven game All-Star streak and selecting Brandon Roy and David West.

Even though the New Orleans Hornets play in front of dozens of fans every night without altercation, the Big Easy is apparently something to be very, very afraid of. And Tracy McGrady's unnatural phobia of Harry Connick Jr., voodoo parlors and crawfish etouffee has led to one of the great All Star non-appearances in league history.

Loren said...
This might explain why after even All-Star Reserves were selected, Nba.com sent out a promotional e-mail for the ASG with T-Mac pictured with the starters instead of AI.

Unknown said...
One less game that I have to see T-Mac's crooked, fish-like eyeballs? I'll drink to that.

This guy is a world class puss anyway. We're talking about a kid who says he's "from the streets", but when the Olympics was in Greece, he didn't want to go because of security issues. Dude, I've been to Greece, the worst thing that happened to me was people wouldn't stop trying to sell stuff to me.
2/12/2008 8:09 AM

Anonymous said...
Now I could be wrong, but didn't about 200,000 New Orleans residents "relocate" to Houston not so long ago? Perhaps Mr. McGrady may have connected with some of these people a little more than you think, rather than just a "depressing Spike Lee Documentary". Maybe if y'all comprehended the maelstrom of shit that was carried out by the NOLA police in the wake of Katrina, you might comprehend the reservations of McGrady.
2/12/2008 10:01 AM

Tonewise said...
obviously no one really knows what Tmacs true feeling are on this, so its all just personal opinion/input...

However I kind of have to say I feel like he is making a good statement, especially when you look around and see all of these star athletes getting into shootings at night clubs, attempted robberies, home invasions and of course murder... Maybe there is more, or simply much much less to it than that, but I have to say I feel like there is something decent beeing said by him if any of that has to do with it...

Tonewise said...
oh and by the way, with regards to what another reader wrote on here one day ago or another...

Yes its cool to see out of the box worst of the night reports like the last few days have been... HOWEVER.. Ill be damned if I cant log on in the morning to read up on Jason Collins 0-for-everythings, a Derrik Martin missed layup or four etc, etc... I love that shit!
2/12/2008 10:25 AM

flohtingpoint -- Do you suppose that T-Man sleeps with a teddy bear when he's out on the road? I think so.

carl -- Here's the thing, we've been to N'awlins since Katrina. Had a great Mardi Gras there, in fact (well, except for one unfortunate plate accident involving Statbuster and an angry waitress). Look, if we can survive four or five very drunken nights in the French Quarter just a few months after the worst natural disaster in United States history, I'm pretty sure a professional athlete surrounded by body guards and posse members can make it too.

Teddy Bear? Perhaps, but thats after he spends all night with Rafer Alston, doing pedicures and facials while chatting about who might ask them to the spring formal or who can hoist up the most ill advised shots in the upcoming game.

Anonymous said...
What the hell magazine is T-Mac reading in that pic, anyway? Reading crap like that isn't going to help his image any. Gotta love the NBA Metrosexuals!
2/12/2008 11:39 AM

Unknown said...
No mention today about Shaq and Bill Walton?

Uhhhh...what about the endless wild goose chase? Or the just-got-here-slammed-2-drinks-and-had-to-get-a-nap? Or the fat lady on the balcony? Or....the incident. You know the one.

There were more than a few unfortunate moments. Of course, they helped make the whole trip worth it....

Loyal blog fans, if you learn nothing else from Bawful, learn this. Go to Mardi Gras. With friends. Without spouses or kids. It helps NO, and you have never partied unless you've partied Mardi Gras.

Basketbawful said...
flohtingpoint -- I dunno. T-Mac looks a little like Admiral Ackbar in that picture...

wormboy -- Tracy secretly prints out Basketbawful and hides it inside a magazine. Probably Playgirl.

dave -- Okay, okay. The plate incident was the only one I was sober for. As for "the incident," we shall not speak of it again. I still say I found the turkey legs first...you were really drunk, you know? Can't really trust your judgement, even if I had just peed on the front of a Subway in the middle of a busy parade route.
2/12/2008 3:33 PM

Anonymous said...
So, a top NBA player with a history of back problems wants nothing to do with a meaningless exhibition game? Shocking.

Anyways, T-Mac is right about one thing: he shouldn't be a West All Star this season. He's missed big chunks of season; he put up big numbers but for a team that's out of the playoffs right now.

Also: Baron Davis!, Tony Parker!, Deron Williams! These guys (and Brandon Roy) are all more deserving than T-Mac of a spot in the team.

Anonymous said...
You'd think T-Mac would live for All-Star weekend because he's accomplished nothing else in this league. We all know he's a First Rounder Flounder (as in, "I suck so bad, I can't even get my team past the first round of the playoffs in this watered-down league").
2/12/2008 5:06 PM