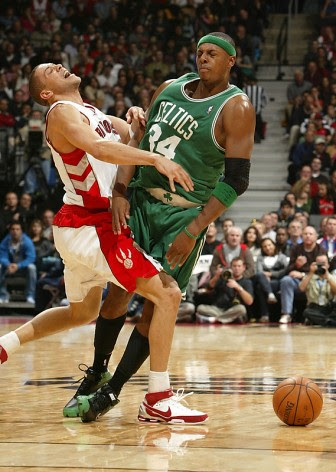 Paul Pierce copped a little 'tude while
out on the town in Toronto.

This story comes from a friend of mine who currently lives in Toronto and is a huge basketball fan. He would prefer to remain anonymous on the site, so I will refer to him as "Toronto Jones" or "TJ." Anyway, some members of the Boston Celtics were gettin' jiggy with it the night before they played the Raptors, and one particular Celtic got a little too jiggy. Here's what went down:

Last Saturday night, Toronto Jones went to Club Inside with some buddies. It's a really swank nightclub right in the middle of the main club district in Toronto. Vince Carter is still a part-owner, so a lot of professional basketball players party there when they're in town.

The Celtics were having a private party in one section, and at some point TJ's group spotted a bunch of the players leaving. They were ready to go anyway, so TJ and one of his friends went out the front door and walked around to the back entrance of the club (they were parked near there). When they got to the back door, they saw Kevin Garnett, Paul Pierce, and several other tall black men standing there. TJ didn't recognize anyone else (no Ray Allen), so he thinks the other guys might have been bench players or just posse. KG had a hood on and was kind of trying to stay out of sight. Pierce on the other hand was dancing around all hyper and talking out loud to no one in particular.

TJ was pretty drunk (but not smashed), so when Pierce walked by he said, "Hey Paul, I predict you guys finish second or third in the East." Pierce immediately spun around and just lost it. He was cussing and yelling things like "Yo, how you gonna diss me to my face like that?" and "Who the f**k this kid anway, that's some bullshit man," and so on. TJ doesn't remember everything he said, but he was really going off.

At one point Pierce gestured to the guy next to him and said, "My man right here is gonna kick your ass." The guy just shrugged and laughed, and he gave TJ one of those "just ignore him" looks. TJ and his buddy thought the whole thing was pretty funny, but they could tell it was time to go. As they turned to walk away, Pierce ran up and did some kind of step-punch-fake thing. Most of the guys in Pierce's group started laughing at him, but KG grabbed Pierce, pulled him back, and said, "Naw, can't be doing that shit dawg" in a really calm voice. TJ and his buddy started walking to the car and Pierce was still yelling chirps at them from behind as they left.

TJ swears this is a true story, and I believe them. He said he wishes he could remember more of Pierce's quotes, but that it was "a typical flow of semi-coherent hip-hop disses." Anyway, it appears that the possibility of the Celtics not winning the East is a sensitive topic to Pierce.

Note: This isn't exactly a new thing for Pierce. Everyone knows about how he was attacked outside a Boston nightclub back in 2000. Then the team specifically asked him to tone down his partying a couple year's back. Pierce's response to the team's request was rather acerbic: "Hey, this is where I work. I'm not a drug addict. I'm not out every night until 5 or 6 o'clock in the morning. I'm in control of my life. What I give them between the lines is their concern, and I don't think they have any complaints about that. The rest is my business."

Anonymous said...
Just reinforces the perception I've had for a long time that Pierce is one of those very good players kept from being great because he's a head case. Some guys over achieve because of their mindset, and others under-achieve. Pierce is the latter.

By the way, I include Kobe and Iverson in that. Had Kobe not been such a donkey, the Lakers would have been like Jordan's Bulls. So we should all that Kobe for his asshattery, which apred us from that sickening spectacle.

ChrisH said...
doesn't sound too bad. interesting for sure, but having been a drunk idiot myself on numerous occasions I don't read too much into this. If anything PP could be fun to drink with, or he could get annoying very fast.
11/06/2007 3:20 PM

Anyways, Paul seems like he'd be annoying when drunk, clown' around on the get down with the 4 pizzound in the wizzy. You feel me? You naw I'm sayin'.

My point is, I agree that he has all the potential in the world, but is a basket case. Any idea where the term "basket case" came from? It sounds rediculous.

Basketbawful said...
wormboy2000 -- I have to admit that I was at least a little surprised that Pierce is still acting that way at (almost) 30. But, like you, I'm not at all surprised that KG was the voice of reason.

thehype -- Now, do you meet Skeets and Tas could have each taken Pierce one-on-one, or as some kind of "Mega Powers" style tagteam? Because I would definitely agree with the latter.

chris -- I don't think it's that big of a deal either, just a funny little story of pros acting like morons. I'm guessing Paul would be fun for the first 30 minutes, then annoying for the next couple hours. We all know guys like that.

monr -- KG is a pretty mature fellow, but I'm guessing TJ wouldn't still be with us had he said that.