one trillion (wun tril'-yun) noun. Denotes those occasions in which a player logs one minute of playing time without recording any other statistic. The term is derived from the player's statistical line in a box score, which (sometimes) reads as a one followed by 12 zeros -- the conventional English-language numeric representation of one trillion.

Word History: The term was invented by Scott Hastings, who managed to hang around for 12 seasons as a career backup/role player/scrub. Near as I've been able to determine, he created the trillion in 1990, as evidenced by this reference in the Sports Illustrated Vault: "Scott Hastings, little-used Piston forward, who claims to lead the NBA in a category that he calls the 'trillion': 'That's when the box score reads one minute played followed by 0-0, 0-0, 0-0, 0 0 0.'" (Props to Hastings, not only for the uncommon self-awareness, but also for inventing a statistic to quantify his suckitude.)

The term was also explained in a 1999 Sports Illustrated article called Garbage Time. It says: "Avoid the dread 'trillion.' In other words, if for some reason you can't get off a shot, do something. In garbage-time lingo, trillion is the line in the box score a player gets when his minutes-played stat is followed by zeros in the nine other categories. 'A trillion means you played, but you didn't do anything,' says Vancouver Grizzlies assistant Lionel Hollins, who was an NBA guard for 10 seasons. 'No shots attempted or made, no assists, no rebounds, no fouls, nothing.' If he still has a trillion in the final seconds, the experienced garbage-time player will commit misdemeanor assault to break up his zeros with a '1' in the personal foul column." For the record, Henry Abbott -- who informed me about this article, remembers hearing references to the trillion back in the 80s.

The term was also used in this article written by Doug Smith for the January 26, 2007 edition of the Toronto Star. Said Smith: "When an end-of-the-bench guy gets in a blowout for a minute, and doesn't record a shot, rebound, assist or point, his boxscore line is known as 'one trillion,' a one followed by nine zeroes." Too bad for Smith (and Hastings before him, I guess) that a trillion actually has 12 zeroes. Don't be too hard on him, though. After all, he is a Canadian. Can you name one famous mathematician from Canada? Exactly.

One problem with the trillion is that every box score is different. For instance, an ESPN.com box score would show 15 zeroes for a one trillion, while a Yahoo Sports box score would show 14. But why get bogged down by details? Webster's New World Dictionary provides an alternate definition of "trillion" that reads "an indefinite but very large number: a hyperbolic use." So perhaps we can agree that the term is simply a way of describing a player's complete and utter statistical insignificance.

Word Examples: Check out this December 29, 2006 box score for the Milwaukee Bucks. Not only did two different players "achieve" a one trillion (Chris McCray and David Noel), two other players almost did it too (Ersan Ilyasova and Damir Markota).

Now dig this January 20, 2007 box score for the Chicago Bulls. Chris Duhon played 10 full minutes without registering a single statistic: No points, rebounds, assists, nothing. It was a seemingly unprecedented ten trillion. I mean, he didn't even put up a shot. On the bright side, he didn't commit any fouls or turnovers either. That's something, I guess. But not really. 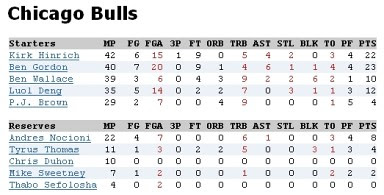 Update: Late breaking news, courtesy of reader Matt. The self-proclaimed "best shooter in the world" Damon Jones had a 12 trillion in Game 1 of the NBA Finals. Congratulations, Damon! You really suck! Oh, and Eric Snow had a one trillion in the same game. Is it any wonder the Cavs got swept?

Matt said...
Chris Duhon isn't even the worst... Damon Jones had a TWELVE trillion - in game 1 of the finals, no less!

Anonymous said...
its an older word than that - the first time i saw the term was way back in about 2002 in the australian publication "pro basketball today". and the more minutes played the better - as in 12 trillion... thats a real accomplishment. i mean, you could just foul someone or turn the ball over.
7/05/2007 10:38 PM

Word of the Day
Previous Posts
The 1986-87 Celtics were dorks
The "Phenomenal" Vince Carter
The '07 NBA Draft: All you need to know
Draft Day whaaaaa?!
The 2006-07 NBA Worsties
Not that there's anything wrong with that...
The flipside of being Tony Parker
The curse of the Big Ten center
Greg Ostertag considering NBA comeback. Seriously.
2007 NBA Finals: Worst. Ratings. Ever.