Game 1-itis (gam wun-it'-uhs) noun. The tendency for teams to play poorly in the first game of a playoff series, especially during the first round.

Usage example: The Mavericks and Spurs both had a bad case of Game 1-itis this year.

Word Trivia: If the NBA regular season is like a game of popomatic Trouble -- with teams and players just focused on scrambling their way to the end -- the playoffs are more like (you guessed it!) a chess match. Coaches have the time necessary to create highly detailed strategies with which to simultaneously attack and stymie their opponents. The intensity level increases, and, as a consequence, so does the defensive effort. Furthermore, in most cases the referees allow greater contact and and an increase in physical play (which typically leads to one or more cases of "Post Game 1 Whine-itis").

As a result, the first game of a playoff series is usually the worst. Take a look at the Game 1s that were played last weekend. Only one team, the Detroit Pistons, reached the century mark (and they scored exactly 100 points) in eight games. The high-scoring Nuggets, Suns, and Warriors scored 95, 95, and 97 points respectively (all at least 10 points below their regular season averages). The best (i.e., worst) example of this was the depressing 84-75 slugfest between the Rockets and the Jazz, which brought back decidedly unpleasant memories of those Heat/Knicks playoff games of the late 90s. Poor shooting, turnovers, and low scores are all symptomatic of Game 1-itis, so this year has (so far) certainly lived down to expectations. 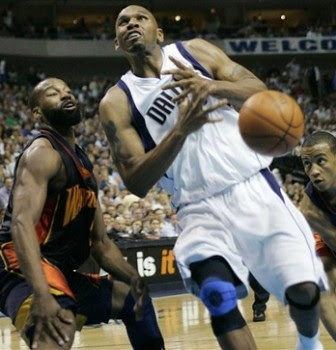 Word of the Day
Previous Posts
An apology to coach Mike D'Antoni
Bulls/Heat: Game 1 Recap
The Bulls have no chance against the Heat (and her...
The Top 5 First Round Playoff Flops
Backboard:1 Kid:0
Wade and Lebron are the new Larry and Michael
Happy birthday Lew Alcindor
Sometimes laughing is no laughing matter
Formal Apology
Don Imus is the Devil, and Rutgers Women's Basketb...