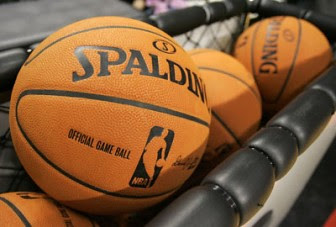 The object of undeserving hate and scorn

We all know the story of how David Stern ditched the new microfiber basketballs after a vocal handful players -- Dirk Nowitzki, Richard Hamilton, Shaq, and Steve Nash in particular -- whined and cried about it for three months. But despite the complaints, and the allegations that the balls dried out players' hands to the point of causing tiny cuts, my interest was peaked. After all, the players who didn't hate the ball seemed to really like it. And why not? The ball was designed by Spalding using a new design and material that supposedly offered better grip, feel, and consistency than the traditional leather ball.

Based on his statistical analysis of the new ball, John Hollinger came to the following positive conclusion: "For all the complaints about difficulty in handling, players are making fewer miscues than a season ago and haven't seen an increase in bad passes. The one apparent change is that it appears shots from 15 feet and in have become slightly easier thanks to some kind rolls. Shots from midrange have changed by a similar factor, and while the close-in shots have increased by more, we may just be seeing an increase in easy layups rather than anything related to the ball." This only served to heighten my interest.

Once the balls were discontinued, I kept waiting for them to drop in price, since $100 is (for me) a lot to spend on a basketball. But the price never came down, so I finally (and somewhat reluctantly) paid the money and eagerly awaited the new ball. It arrived yesterday. I was stoked, and promptly toted the new ball to my Wednesday night pickup league.

The new ball drew a chorus of "oohs" and "ahs" when I pulled it out of my gym bag. Several of my buddies came over to test it out, feeling the material and hoisting up a few shots. My buddy Mr. P* said, "I like this ball. It feels great, good grip." Evil Ted thought the ball "stuck to the hand well, bounced well, came off the board well, and it seemed to get friendly bounces on the rim." It got a positive review from everybody who got a chance to check it out and use it.

Personally, I loved it. I was able to get a good grip on the ball, loved its physics off the dribble, and it shot well. Things were looking good. I was cautiously optimistic.


*Mr P. loved my post about pickup basketball nicknames, but was bitterly disappointed that I omitted his nickname: "Tape." So consider this an addendum. See, Mr. P has a few very specific spots on the floor that he loves to shoot from. I once suggested that he probably puts a piece of tape on the floor so he can remember where to spot up. After that, we started calling him Tape, and shots from his sweet spots are often referred to as "Tape shots." Oh, and during a game, if he's open at one of those spots, he simply yells "Tape!" and, no matter where I am on the floor, I can immediately get him the ball, regardless of whether I can even see him.

My league uses the Wilson Evolution basketball. This is partly my doing, because I've spent the last few years experimenting with different basketballs and bringing them in for league play (most notably the Wilson Solution, Wilson Jet, Spalding Never Flat, and Spalding TF-1000). The Evolution received the best response by far, and we've been using them exclusively (unless I bring in a new test ball) for almost two years.

We began the first game using the new microfiber ball. That's when the trouble started. People immediately began asking "What's that?" and "What's up with the ball?" One of the guys asked me, "Why do you keep bringing in all these funny balls?" The negative responses, for the record, came only from people who hadn't gotten a chance to use the ball prior to the game.

The first shot was an absolute brick, and someone actually said, "That new ball sucks." As if the new ball was so bad it caused a brick on the first shot of a pickup game (see, pickup players have honed their shooting to laser-like perfection). What none of the naysayers seemed to realize is that, other than in appearance, the NBA ball isn't very different from the Evolution, which also is made out of a composite, microfiber material. But according to Evil Ted, the different look was the problem.

"The look was striking. It's harder for you to justify using a new ball when it looks so different. People are used to their basketball looking a certain way. Think about it. If you had two hamburgers that tasted exactly the same, but one of them was purple, you'd probably think it tasted different, even if it really didn't. It's the same with a basketball. Even if it behaves the same way, because it looks different, people think it behaves differently. That's how the human mind works."

And he was probably right. The ball is bright orange and has two interlocking, cross-shaped panels, as opposed to the eight oblong panels found on traditional basketballs. The decidedly unusual look seemed to cause a lot of dismay, particularly since the players hadn't gotten a chance to use it outside of a game situation. So, despite the fact that, after the first shot, people were shooting well (Evil Ted was 2-for-2 from beyond the arc), the ball was discarded in favor of the more familiar Evolution about midway through the game. When I voiced my displeasure, the anti-new ball guys responded with their complaints, which amounted to "it looks funny" and "it feels weird." That was really all they had.

You know what it reminded me of? It's like when you're at a bar or dance club with a mixed group of men and women, and an absolutely gorgeous woman walks in. Half the group (i.e., the guys) become transfixed and ogle her at every opportunity, while the other half (i.e., the women) slowly and methodically pick her apart ("She doesn't look that good," "Her boobs aren't that big," "I can't believe she's wearing that outfit," "Those shoes make her feet look like baby goats smashed between two rocks," and so on). And the complainers in my league were "the women"...nitpicking over superficialities without really giving the new ball a chance.

Which is exactly what happened with the NBA players. They just didn't want to change what they'd always known. Doc Rivers admitted as much when he said, "I think there's a resistance to change in all of us. Whether it's cheerleaders, a dress code, a new ball, whatever. People don't like change. I just think that's the way life is."

Hollinger agreed. "And I think [resistance to change is] the real problem, in the end. People liked the old ball just fine and didn't understand why it had to change."

So, thanks to the fear of change, I'm out a hundred dollars and stuck with a great ball that nobody wants to use. Great.

Christian Angelo said...
This is where the "If it aint broke why fix it" line comes in. You see brother the problem with mr stern is he's too bossy and all that shit. He lives by the "If it aint broke, I'll break it then ill fix it line" That's why he received such a violent reaction.