Do you sometimes go home after a rough day at the office or a rugged game of pickup hoops and say to yourself, "If only I could find comfort in the tender embrace of NBA superstar Ben Wallace?" You really don't need to answer that question, because of course you do.

Previously, the only way to turn your dreams into sunshine was to buy an Inflatable Defender. But the ID is fifty bucks, and its plastic skin can really chafe your nether regions during a night of tossing and turning. But now you have an alternative: check out this auction for a throw pillow that depicts Ben Wallace. Sure, it makes Big Ben look like some kind of freaky mutant with a squashed face, but sometimes it's the little imperfections that make you love something even more dearly. At least that's what I tell myself every morning when I shove in my glass eye. 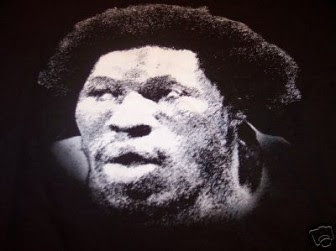 Wouldn't you like this to be the last thing
you see before drifting off to sleep?
Frugality Alert: Target is selling the Inflatable Defender for $10 less than the ID's official site. I'm not a mathmatist, but the people at Target say that's 20 percent off the suggested retail price. So if a mere ten bones was all that was standing between you and your very own air-filled Ben Wallace, your wait is over.

Word of the Day
Previous Posts
Worst of the Weekend: The Dallas D
Word of the Day: embarrassment call
Tex Winter agrees with Basketbawful
I'm sure Michael Ray Richardson was just kidding
Karl Malone likes big, juicy breasts
Word of the Day: up-and-under
Does Gilbert Arenas really have the strongest legs...
Word of the Day: "If you're..."
D-2 player impersonates Kobe Bryant
The best game you didn't watch this weekend