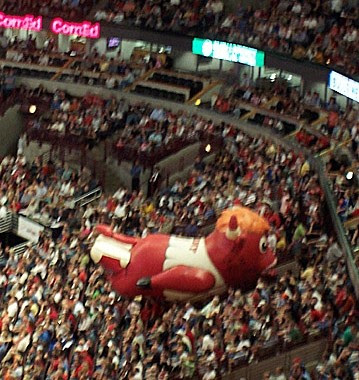 "Oh the humanity!"
Much like high school Geometry, Game 1 of the Bulls/Heat playoff series taught us several valuable lessons, many of which we won't remember past the end of the week. But as with my old math classes, I'm going to jot down a few notes that I most likely won't be able to understand when I reread them ten years from now.

1. Keeping Luol Deng (game-high 33 points) and Ben Gordon (24 points, 11 assists) instead of trading for Pau Gasol was the best non-trade GM John Paxson ever made. The people of Chicago will continue to believe this until Deng and Gordon have a bad game and the Bulls' lack of an inside scorer comes back to haunt them.

3. If all the above are true, you should probably win by more than five points.

4. And you really shouldn't allow them to rally from nine points down with less than two minutes left, nearly allowing them to steal a game they had no business winning. Just sayin'.

(I'd just like to point out that, until Wade caught fire at the end of the game, Antoine Walker and his 20 points kept the Heat within striking distance. That's right: if the Heat had come back to win this game, it would have been because of Antoine Walker. As a Bulls fan, I'm not okay with this.)

5. Shaq doesn't commit fouls. He just has big feet. No, seriously, his feet are like little, feet-shaped people.

There's nothing quite like witnessing an NBA playoff game live. You get to experience things you never get to see on either local or national television broadcasts. Such as:

The Hinden-Bull Disaster: The Bulls have a blimp -- called the "Bull-imp" -- that soars majestically over the crowd during games, sometimes dropping little t-shirt patties onto the frenzied attendees. During Game 1, the blimp lost power and plummetted into the waiting arms of the fans, who grabbed onto and started hitting it. I probably don't need to mention that they sell beer at these events. Anyway, the blimp rested on top of a group of people for several minutes, undoubtedly obstructing their view of the game, before a group of maintenance workers showed up to retrieve it. But here's the thing: What can you do with a giant, powerless blimp in the middle of an NBA playoff game? The answer is: absolutely nothing. They tried to shove it into the tunnel that leads to the locker rooms, but it wouldn't fit. There must not be a way to deflate the thing, so it just sat there, stuffed halfway into a tunnel, it's big head bobbing in front of an entire section of fans who could no longer watch the game.

James Posey isn't any good: The absolute highlight of the game, aside from the Bulls' victory of course, was the Basketbawful gang leading the crowd in a chant of "PO-ZEE SUCKS, PO-ZEE SUCKS, PO-ZEE SUCKS!!" a record-setting three times (a fourth attempt fell flat). Even better: during the first chorus, they showed Posey's face on the JumboTron mid-chant. He just kind of shook his head and laughed, but you know that, deep inside, he was filled with a savage rage. Fortunately for the Bulls, this rage didn't turn into a flagrant foul or a scoring explosion. In fact, he immediately came out of the time-out and missed a three-pointer. For the record, he didn't score again after the chants. We were so totally in his head.

(Here's a little lesson in Fan Taunting 101: Never, under any circumstances, should you taunt a superstar. Chanting "KO-BEE SUCKS, KO-BEE SUCKS!!" might get a 15-point bomb dropped on your team immediately. Instead, choose a roleplayer with limited scoring ability. Bonus points will be awarded if he's overly aggressive and imminently hateable...like James Posey.)

Fat guys in party hats: The Bulls are one of the many teams who employ a group of singing/dancing fat guys to provide "entertainment" during timeouts. When the Matadors were unleashed during a break in the third-quarter action, they were met with a stunned silence from the crowd. No one seemed to know who these pork beasts were, or what it was that they wanted. Perhaps these lurching ham monsters had taken over the building in order to raid its concession stands? But...no...wait...they were here to perform the Truffle Shuffle while singing "YMCA." Remember that projectile vomiting scene from "Team America: World Police"? If so, then you can imagine how the crowd reacted when their shirts came off.

(Before you start accusing me of being insensitive toward the plight of the obese, allow me to remind you that their insatiable hunger has left them bereft of normal human emotions. In fact, their brains send out one message, and one message only, in an endless loop: "EAT NOW, ROOARRGH!!" Anyway, maybe you'll think my disgust is justified after you review this picture taken during the Bulls' St. Patrick's Day game.) 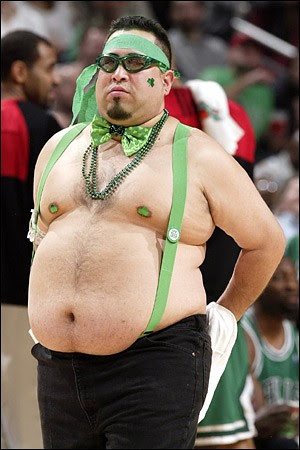 Yes. Those are shamrock-shaped pasties.

Christian Angelo said...
Nyahahaha, I watched the Bulls-Miami game live on NBA all access here in the Philippines and the only sucky part about the game aside from watching Antoine Freaking Walker drop 20 on the bulls is that I have to watch it on 3freakingAm in the morning. It was all worth it though, and I enjoyed the Posey dissing part haha. POSEY SUCKS POSEY SUCKS
4/24/2007 12:42 AM

Chris said...
Hey - give credit where it's due - www.fatchicksinpartyhats.com. Haven't been there in awhile - must see:

Word of the Day
Previous Posts
The Bulls have no chance against the Heat (and her...
The Top 5 First Round Playoff Flops
Backboard:1 Kid:0
Wade and Lebron are the new Larry and Michael
Happy birthday Lew Alcindor
Sometimes laughing is no laughing matter
Formal Apology
Don Imus is the Devil, and Rutgers Women's Basketb...
Hamburgers make the Knicks mad
Word of the Day: First Round Dark Horse