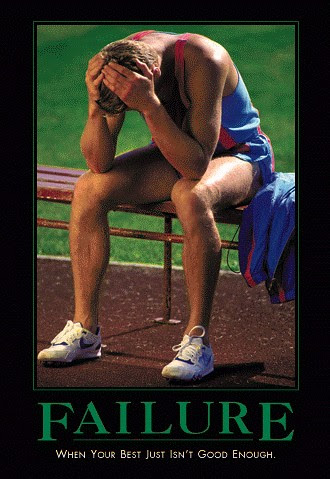 This should be the Bulls' playoff slogan...

The Chicago Bulls have been one of the hottest teams in the league during the second half of the season. They're 20-8 since the All-Star break. They won 10 of their last 13 games, going 6-2 down the stretch. They finished with a record of 49-33, third-best in the Eastern Conference. That said, they have absolutely no chance of making it to the second round of the NBA playoffs.

I'm not saying this because their opening round opponent is the defending champion Miami Heat. I mean, the Heat are good -- they managed to win 44 games despite the fact that Shaq and Dwyane Wade combined to miss 73 games -- but they're not great. Shaq is past his prime, Wade isn't fully recovered from his shoulder injury, and the supporting cast is either old (Antoine Walker, Gary Payton, Alonzo Mourning) or achingly average (James Posey, Udonis Haslem, Jason Kapono). Are they a threat? Absolutely. Are they world-beaters? No so much.

But my feelings about the Bulls chances for success have nothing (or at least very little) to do with the Heat. It's not about X's and O's, or the matchups, or Kirk Hinrich's idiot mistake of suggesting to the press that the Bulls should have beaten the Heat in the first round last year (seriously, what was he thinking?!). Hell, it's not even about the fact that the Bulls are a team with no inside scoring threat that relies almost entirely on jump shots to win (a strategy that, to my knowledge, has never worked in the playoffs).

No, this is the reason they're going to lose: the Bulls have had two "gut check" games in the past month -- a March 31st home game against the Cleveland Cavaliers and a season-ending road game against the New Jersey Nets -- and they lost them both. These games were absolutely crucial to the Bulls' hopes of landing the second seed in the Eastern Conference playoffs. If they had won either one of those games, it would have meant the difference between going through Washington, New Jersey, and/or Toronto to get to the Eastern Conference Finals, or being forced to knock off Miami and then (most likely) Detroit.

The Bulls think they're okay, though. They're confidant...cocky, even. After all, they started out 3-9 and then steadily improved throughout the season. They won the season series against both the Heat and Pistons (3-1 each). They beat Dallas and San Antonio at home, and they beat Phoenix on the road. Going 3-3 against the three best teams in the league, and 6-2 against their probable first and (if they make it) second round opponents, has given them reason to hope.

But hope and a couple bucks won't even get you a double diet frapacheeny decaf ventie whatever at Starbucks. If you really want to be a contender, you have to come through in the must -win games. And regardless of what the media and the experts say, there are only a few of those very season. The Bulls had two -- one of which was at home, where they're 31-10 (best in the East) -- and got their buttocks handed to them in each case. The Nets weren't even a .500 team at the time! If you can't beat a sub-.500 team on the road in what's probably the most important game of the regular season, do you really expect me to have faith in you during the playoffs against teams with proven championship pedigree?


Had the Bulls won either of those games, I would believe in them...even if they hadn't ended up as the second seed. I really don't think seeding is that important, as long as a team has shown it has the mental toughness to win a game against quality competition when it really, truly counts. But they were outplayed by two teams that had been underachieving for most of the season. What this tells me is that the Bulls may play all-out every night, but they have only one speed. Teams like New Jersey, Cleveland, and even Miami...they can turn it on when they need to. And that, more often than not, is the difference between winning and losing.

The Bulls just aren't there yet. And I don't think it's even a case of needing a low post scoring threat. I think it's about having an unshakeable team leader who has proven himself in clutch situations. Chicago has a nucleus of young, smart, hard-working players and a bulldog coach who gets the most out of his squad on a regular basis. It's an inspirational story, but inspiration and a plucky spirit alone don't win playoff series. The best team is usually the toughest team. And that's why, yet again, it just isn't the Bulls' year.

Anonymous said...
Well said. I was thinking the exact same thing. I don't understand how no one else has picked up on this - every time this group had a must win game in the past two years they lost, even folded.
4/21/2007 6:05 AM

Pete Fresh said...
Another reason the bulls can't win is cause Pat Riley can shut down an offensive force like no other coach and Ben Gordon can't handle that kind of pressure. I've been a long time fan and I decided to start my own, gamewreckgame.blogspot.com. You should check it out.
4/21/2007 11:27 AM

ChrisH said...
I think you're putting too much weight into 2 games. Cherry picking the two losses as more informative than say the 2 wins vs detroit which occured during the same time period, or the 80 other games that counted just as much makes me suspect that your argument is shit.

That said, the theory that the Bulls only have one speed and can't step in up for the playoffs like other teams, is interesting and may prove true. I don't know if the Heat's playoff gear is going to be good enough to expose it, the Pistons should be a true test.
4/21/2007 10:19 PM

Anonymous said...
You got a good argument there. But I would say that, for whatever reason, Chicago just always has a hard time playing against New Jersey. That Cleveland game, though, we would've won.

That said, I still think Chicago will advance to the second-round. We match-up really well against Miami. Who gave them the most fits in the post-season last year?
4/22/2007 12:19 PM

Al James said...
Well if you compare the Bulls team this post-season to the Bulls team that took Miami to game six during last year's playoffs, I'd say the Bulls have a very good shot at winning this time around. If anything, the Bulls young players are more developed i.e. Loul Deng. Ben Wallace has been in the playoffs enough to provide veteran leadership that they did not have last season. Also, the Miami team this year is simply not as good as they were last year. Shaq may be in the best shape he has been in recent years but he's still pushing 40 with a short stick. If Dwayne Wade wasn't broken, I'd agree with you, but this time around the Bulls have homecourt advantage and a better roster (on paper). The only advantage Miami has is impressive survival skills.
4/23/2007 9:34 AM

Word of the Day
Previous Posts
The Top 5 First Round Playoff Flops
Backboard:1 Kid:0
Wade and Lebron are the new Larry and Michael
Happy birthday Lew Alcindor
Sometimes laughing is no laughing matter
Formal Apology
Don Imus is the Devil, and Rutgers Women's Basketb...
Hamburgers make the Knicks mad
Word of the Day: First Round Dark Horse
Leave it to whining Laker fans