un-emulate-able (un-em'-yoo-lat'-a'-buhl) adjective. Used to describe a basketball player whose physical abilities and/or style of play cannot be duplicated.

Word History: The term was coined by Shaquille O'Neal on March 15, 2007, after the Miami Heat notched a 93-86 victory over New Jersey Nets. Said Shaq: "I'm un-emulate-able. I took the files and deleted them, ate 'em, used 'em in the bathroom, flushed it into the sewage plant, and blew the sewage plant up. So there's no way my style can be copied. It's gone." Reading between the lines, it appears that Shaq's savage hunger has reached the point where human food can no longer fulfill the nutritional requirements of his monstrous body, forcing him to feed on abstract concepts like "style of play" and "government intelligence." Reading even further between the lines, it seems that his bodily excretions also serve as powerful explosives. Let the world's toilets...beware. 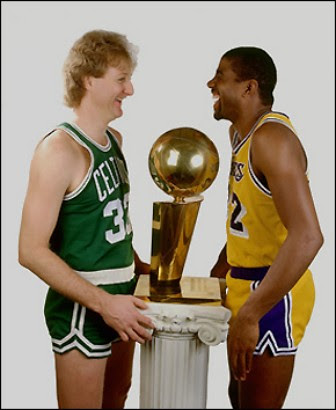 Is it just me, or does it look like they're
double-teaming the championship trophy?