I've said it repeatedly over the last few years: Kobe Bryant, while unquestionably capable of being a top-notch defender, is often lazy on defense. And every time I say this, I get branded a "Kobe Hater" who doesn't know what he's talking about.

Well, Tex Winter -- who, for the record, is one of Kobe's coaches -- agrees with me. Winter believes that Kobe doesn't play "a lot of basically sound defense," and that Kobe has been "saving energy on defense" by "playing a lot of one-man zone...doing a lot of switching, zoning up, trying to come up with the interception." Winter then concludes that Kobe's defensive deficiencies are, indeed, affecting the Lakers. And not in a good way.

I was once told by a man with a mustache that I'm not as qualified to rate Kobe's defense as coaches who get a chance to watch him play every night. Well, it now appears that a coach who does watch Kobe play every night shares my opinion.

That sound you just heard...was checkmate.

[From the LakerNoise blog, via TrueHoop] 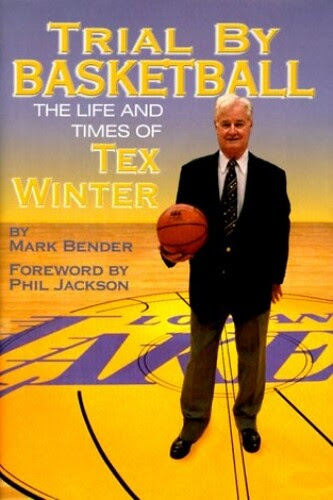 In this book, Tex discusses the kind of sound
defensive techniques Kobe doesn't use.
(For the record, Kobe Bryant also agrees with Basketbawful, at least with regards to the MVP race. I once stated that, in the absence of definitive MVP criteria, voters are forced to go on prededent. And the precedent is clear: the MVP must be on one of the best teams in the league. Well, wouldn't you know it, Kobe recently said that he doesn't merit MVP consideration because the award should go to a player on a team with one of the NBA's best records. Said Kobe: "You have to honor that. When we get to that point, then maybe I'll get some consideration." And hey, this is from a man who doesn't just get to watch Kobe play every night, he gets to be Kobe every night. So I guess I'll just have to take his word for it.)

Edit: Unable to admit that he was wrong, Mr. Mustache is making the ridiculous claim that I took Tex Winter's quotes about Kobe's defense out of context. Uh...what? Here's the full text of Winter's quotes (again, this is from the LakerNoise blog):

The main message that Winter, a Lakers consultant, would like to get across to Bryant is that the problem is not his offense.

"I’d like to see him play better defense," Winter said, adding that he had addressed the issue recently with Bryant but didn't come away with the idea that Bryant was intent on changing his approach.

"You know Kobe," Winter said with a chuckle. "He has his game plan. I think he heard me. But he feels there's a certain way he’s got to play the game. But it doesn’t involve a lot of basically sound defense."

Because the Lakers need so much of his effort at the offensive end, Bryant has adopted a save-energy plan on the defensive end, Winter said. "He's basically playing a lot of one-man zone. He's doing a lot of switching, zoning up, trying to come up with the interception.

"The way Kobe plays defensively affects the team," Winter added. "Anybody that doesn’t play consistently good defense hurts the team. That's not only Kobe. Our other guards tend to gamble and get beat. Another problem is that the screen and roll is not played correctly."

Hard to see how I could have possibly misintrepreted Winter's comments or taken them out of context. I don't care if the rest of the article is a comparison of Kobe and Michael Jordan. All of that has to do with offense. This post is specifically addressing my assessment of Kobe's defense, which is often lazy. According to his coach, my evaluation was one the money, and Kobe Lovers (or at least one in particular) cannot or will not admit that.

I mean I have quotes -- direct quotes -- from one of his coaches. And Tex Winter is considererd one of the great basketball scholars of our time. I'm pretty sure he knows what he's talking about. Trying to claim I'm taking his quotes out of context really only makes you look stupid.

Anonymous said...
Hehe, I saw that today too. I'm a Kobe hater though and some Kobe Fanboy just yesterday had the nerve to say Dr. Bryant was better than Jordan. The fan boy also thought Aldrige would have been a better fit for the Bulls than Tyrus Thomas for what it's worth.
3/30/2007 12:31 AM

Anonymous said...
Talk about quoting out of context. He wasn't saying Kobe is a bad defender. He was saying how he gambles a lot on defense and tries to overplay passing lanes. By the way, Kobe has more steals than any other 2 guard in the NBA over past 4 seasons so i think he's doing something right.

Also Tex wasn't saying anything about his one-on-one defense. He was saying that sometimes he'll roll off his man to try to make a steal. Kobe's an excellent man defneder. In fact, nearly every time one of those scorers like wade, lebron, arenas score big numbers against the lakers it's more to the Laker's big men's inability to play the high screen and role. Not kobe's defense.

Basketbawful said...
No, you need to get it straight, Mr. Anonymous. I just posted the full text of Winter's quotes. He states, unequivocally I might add, that Kobe needs to play better defense. That Kobe's defense is not fundamentally sound. That Kobe is part of why the Lakers' team defense breaks down. The quotes are right there. He said it. He's Kobe's coach. He didn't qualify his statements by saying "Kobe plays great man defense." He did not compliment Kobe's defense in any way, shape, or form. He didn't say "but." He didn't give Kobe or his defenders a single out. He even told Kobe that he needs to play better D, and that Kobe ignored him. You can't possibly spin this without looking like an idiot. Congratulations.
3/30/2007 9:47 AM

Anonymous said...
The Friedman guy is just a Kobe fanboy. Almost all his posts are about how great Kobe is. I think it is really Kobe in disguise, trying to inflate his online 'cred'. The 'stache is just a clever disguise.

Anonymous said...
I wouldn't say Kobe's defense is not fundamentally sound and I don't think that's what Tex is implying either. What he's saying is, when Kobe's gameplan is to drop 50 and carry the bulk of the Laker's offense, he sacrifices defensive consistency to conserve energy. You'll also notice that when Kobe is scoring in the 20s, he's capable of locking down his opponent. It sounds like you're implying Kobe never plays fundamentally sound defense and that's a flaw in his game, which it's most certainly not.
3/31/2007 4:20 PM

Normborn55 said...
Related to the subject of Kobe's defense:

Back in 2004, during the NBA Finals vs Detroit while driving with Tex to Staples before Game 2, I asked him if the Triangle Offense allowed players to pace themselves so they had enough energy to play on both offense and defense. Tex replied, "regardless of the system, players must hustle on both ends of the court... if they don't, they can rest on the bench."

More recently during the regular season, when Kobe was out with an injury and the Lakers were playing Portland, Tex (who was still recovering from a severe stroke) addressed the team before the game with his now famous quote: " There is no substitution for hustle, and if you don't hustle there will be substitution".
6/03/2010 7:32 PM
Post a Comment
<< Home
Subscribe
RSS Feed
Mailing List

Word of the Day
Previous Posts
I'm sure Michael Ray Richardson was just kidding
Karl Malone likes big, juicy breasts
Word of the Day: up-and-under
Does Gilbert Arenas really have the strongest legs...
Word of the Day: "If you're..."
D-2 player impersonates Kobe Bryant
The best game you didn't watch this weekend
Basebawful: Unintentionally Funny Headline edition
Nash and his historical accomplishments
Basketbawful versus a man and his mustache