Thursday, March 01, 2007
Newsflash: It's always been about the individual
By Basketbawful at 8:54 AM
3 comments 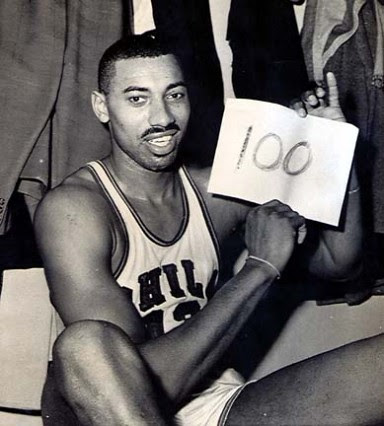 Celebrating superstars and stats above teamwork
and winning is hardly a new thing.

It happens every season. Some alleged NBA "expert" writes a long and damning editorial about how the league has been or is in the process of being destroyed by marketing individual superstars ahead of the team. The latest of these quibblers are MSNBC's Mike Celizic, who bemoans how the NBA has traded away teamwork for the cult of personality, and FOX Sport's Randy Hill, who claims that the NBA is responsible for the "me first" attitude among players.

Both Celizic and Hill make it sound as if this is a relatively new phenomenon. Celizic only goes back as far as the Shaq/Kobe fued, and Hill, for his part seems to think it began with Larry Bird and Magic Johnson. To which I say: What??!

Maybe they're trying to frame their articles within a context that current NBA fans can understand, or maybe they ignorant of league history. The NBA was born in the fall of 1949, when the Basketball Association of America (BAA) merged with the rival National Basketball League (NBL). At the time, professional basketball was just a way of filling stadiums and sports arenas when there wasn't anything else going on. It was almost impossible for owners to maintain financial viability, and teams were constantly folding or moving to new cities. In 1949, the NBA featured teams such as the Washington Capitols, Providence Steamrollers, Rochester Royals, Chicago Stags, St. Louis Bombers, and Indianapolis Jets. Ever hear of those teams? Didn't think so. Furthermore, the Warriors were in Philidelphia, the Pistons were in Fort Wayne, and the Lakers were in Minneapolis.

Team owners, desperate to turn a profit, quickly realized that fans (and potential fans) were drawn to specific players as much or moreso than the teams they played on. Many times, a team would draft local college players ahead of other, more talented players. In fact, the league even instituted a territorial draft that took place before the regular draft. This allowed a team to forfeit its first-round pick to select a player from its immediate area (under the assumption that the player had a strong local following). That's how the the Boston Celtics got Tom Heinsohn, and how the Philidelphia Warriors got Wilt Chamberlain.

Anyway, the league has marketed the individual from the very beginning. In the late 1940s and early 1950s, George Mikan was professional basketball's first superduperstar, and when his Lakers travelled to New York, the billboards would read "George Mikan versus the New York Knickerbockers." The NBA All-Star game was created in 1951 so the league could showcase its best individual players. And let's not forget about Wilt Chamberlain. People flocked from the four corners to see him play, regardless of whether it was for the Warriors, the Sixers, or the Lakers. Due to his incredible popularity (and the resulting boost to ticket sales), he demanded and received the first $100,000 per year contract -- at a time when most players were making around $10,000 per. (Immediately afterward, Red Auerbach signed Bill Russell to a contract worth $100,001 per year, just to one-up the big guy; and thus the "exploding salary scale" was born.) And, much like today's stars, Wilt was accused of putting stats and records ahead of winning, which led the "experts" to conclude that Wilt's greed and selfishness would ruin basketball. Sound familiar?

The point is: none of this is new. Look, I'm as much a basketball purist as anybody. I want the sport to be played "the right way" -- fundamentally sound and team-oriented. I would much rather see the Phoenix Suns have six or seven players in double figures than watch Kobe score 81 points while the rest of the Lakers stand around and watch. But I also understand that the NBA is a business, and, as with all businesses, making money is the bottom line. Does this lead to selfish players trying to pad their stats to sign bigger and better contracts? Of course. But that's always happened. Pat Riley was a member of the 1971-72 Los Angles Lakers team that won 33 straight, finished the season 69-13, and won the NBA championship. Do you think "Mr. 15 strong" put the team first? He'll tell you he did, but by every account I've read, he fumed about not getting enough playing time, sulked whenever he was benched, and regularly got into fights with teammates during practice over his role on the team. So there you have it.


The selfishness and me-first attitude have been around since the beginning. The only real difference is how it's being expressed by today's players. And that problem is due more to modern cultural influences than NBA policy. The fact is, David Stern can't regulate teamwork, selflessness, and desire. There are too many other factors involved.

And as for the writers and critics, well, they don't really suggest any kind of realistic alternative. The NBA is a business that makes a profit by marketing its players. Take away the league's profit center, and you take away the league. Unless they can suggest some kind of practical solution, I wish they'd stop recycling the same story year after year.

Anonymous said...
The NBA is the best sport to market individuals. The fans are the closest to the live action, the players (minus Rip Hamilton and Laimbeer after Isiah broke his nose... good times!) don't wear any helmets and it's truly the only sport were a single individual can take over the game.

I didn't read the articles, but it wouldn't surprise me at all if the writers were white guys. Let's face it, the NFL has the most crazed lunatics, baseball has redneck steroid dudes and hockey doesn't count... yet every year we hear about the poor job the NBA does at marketing the sport and that the league is full of thugs. Only in the NBA do we ever hear about the ill effects (no pun intended) of hip-hop culture.

These are probably the same writers that suggest that the NBA eliminates guaranteed contracts and hail the success of the NFL. The NFL succeeds because of gambling, they control the information (please name the last announcer to ever criticize a player outside of Moss and TO and they have ESPN in their back pockets), and they benefit from the most television friendly game (which stems from playing on weekends and during indoor months).

laura the tooth said...
amen. i'd like to add larry brown to the list of hypocritical old folks who love to bitch about how much more selfish and awful today's nba players are than before.

Word of the Day
Previous Posts
Shawn Bradley: Where are they now?
Save the date: March 10th is Adam Morrison Bobbleh...
Our unathletic President
Worst of the Night: Minnesota Timberwolves
Shaun Livingston: "Why god? Why?!"
It's official: Eddy Curry is better than Shaq
Houston likes the ladies
Take the Lebron Challenge
Word of the Day: Hate Bone
World of Barkleycraft