Wednesday, March 28, 2007
Does Gilbert Arenas really have the strongest legs in basketball?
By Basketbawful at 8:24 AM
5 comments

A couple weeks ago, I was watching NBA Fast Break with my buddy Statbuster, and they showed a clip of Gilbert Arenas hitting a jump shot while getting fouled on the arm. It was a reasonably impressive play, but nothing that out of the ordinary, highlight-wise. But then ESPN analyst Greg Anthony took a giant, Bill Waltonesque leap into Crazyville when he made the following statement: "Gilbert Arenas can do that because of the strength he has in his legs. He has the strongest legs in the NBA." 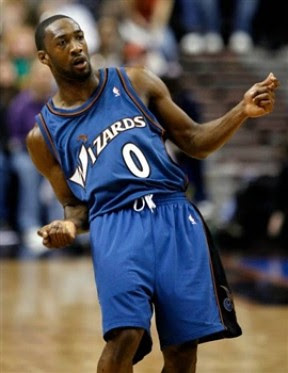 Gilbert Arenas dances a jig to celebrate
the awesomeness of his mighty legs.
As WTF moments go, that one was up there. How do you even gauge something like that? Is there some kind of NBA preseason combine where the players get together for squatting competitions? And mind you, Anthony didn't say that Gil has the strongest legs for a guard, or even for a player his size...Greg thinks Arenas has stronger legs than any other NBA player. Stronger than Lebron's, stronger even than Shaq's. Apparently, Gilbert could crush all of the world's evil into a watery paste with his mighty shanks. And after he retires from basketball, that's exactly what I expect him to do.

All discussions of crimefighting aside, why do experts, analysts, and even fans feel the need to constantly make superlative declarations? I understand the need to classify and organize people, places, and things. It's human nature, and an integral part of how we come to understand the world around us. But is it really necessary to take it to this degree? Where, in order to compliment an above average play by a very good player, we have to put his legs at the top of a "Best Of" list?

It happens all the time too, and it's getting wackier by the year. A sample statement would be something like this: "Shane Battier is the best in game at coming off blind-side picks to play help defense against opposing big men in the high post." Or maybe, "Michael Redd is better than anybody at catching the ball in the deep left-hand corner, making one or two quick moves, faking right, and then getting off a high-percentage shot." Seriously, tell me you haven't heard comments like that during a typical NBA telecast.

It would be easy to blame Bill Walton, whose Waltonisms have become poplular NBA fodder, for ushering in this Era of Ridiculous Exaggeration. But Walton, for all his faults, usually has a tongue planted firmly in his cheek when he says something like "Tracy McGrady is doing things we've never seen from anybody...from any planet!" It's part of his onscreen persona, and he's only ever half-serious (as far as I can tell, anyway). Not so for guys like Greg Anthony. They are 100 percent serious, at least when the statement is made. I'd guess that, if given the chance to consider his remark, Anthony would probably take it back, or at least clarify it somehow. But that doesn't change the fact that he, and many (if not most) other analysts, will continue to state the outrageous with a straight face at every opportunity. Which to me, is one of the greatest abominations, not just of today, but in the history of Western Civilization.

Anonymous said...
If you think that's bad, just wait for the playoffs when the hyperbole is taken (for lack of a better word) to playoff level.

Basketbawful said...
Craig, I'll admit Gil has strong legs...but then again, I've seen a lot of players toss of casual 40-footers at the end of quarters and such. It almost always looks easy, so I'm not sure if it's just Gil.

And as for Walton, I do honestly believe he makes statements like that for comedic effect. At least, I hope so. Unlike most broadcasters, who find at least one "best of" quality for seeminly every player, even the guy at the end of the bench.
3/29/2007 9:15 AM

Jesse said...
A friend of mine always quotes Walton as saying, "Robert Horry is the greatest defensive player to ever play the game"

Not sure if it's true, but sounds like it would be.

Anonymous said...
Walton is very tongue-in-cheek, which is refreshing considering all the homers in NBA broadcasting today (Did you hear the call with the Sheed full court shot? "He practices that shot!" HORRRRRIBBBLE)

Walton was at his peak when was doing color for the Clippers with Ralph Lawler. He'd belt out such lines as, "Keith Closs is the greatest defensive center in the NBA!"

It was a true loss in televised sports when Michael Smith replaced Walton a few years ago.

And one last thing about Gil-Zero, the difference between he and other players is that his shooting form does not change no matter how far he is from the basket. Other players have to heave the ball when outsite 30 feet.
3/29/2007 7:46 PM
Post a Comment
<< Home
Subscribe
RSS Feed
Mailing List

Word of the Day
Previous Posts
Word of the Day: "If you're..."
D-2 player impersonates Kobe Bryant
The best game you didn't watch this weekend
Basebawful: Unintentionally Funny Headline edition
Nash and his historical accomplishments
Basketbawful versus a man and his mustache
Kobe, Nash, and the defensive myth
Word of the Day: Mark Cuban Rule
Kobe's 65? What about Nash's 64?
Old-school Celtics commercial