The Mighty Boot of Justice gave Kobe Bryant a swift kick in the ass today: L.A.'s leading chucker received a one-game suspension for rocking an atomic elbow on Manu Ginobili's dough-like face during the Lakers' 96-94 loss to the Spurs last sunday.

Shock and Awe: The announcement met with the predictable amount of bewilderment and outrage in Lakerland. In a television interview, Kobe described himself first as "surprised," then "shocked," and finally "blown away" by the league's punishment. He continuously said the blow was an "unintentional elbow," a simple accident which "happens all the time in basketball."

Of course, coach Phil Jackson immediately contradicted his star player by saying, "When a guy's going up for a shot, he's being contested, you want to draw contact...to draw the foul."

So, uh, which is it? Was it completely unintentional, as Kobe claims, or was it done in an effort to draw contact, as Phil explained. I mean, one or the other, guys; choose a story and stick with it.

Was there precedent? Said Kobe: "I haven't seen a precedence for this. There's unintentional elbows that take place in a game all the time."

Actually, there's plenty of precedent. Defenders have been complaining about Bryant's flailing elbows for the last two or three seasons. He split Mike Miller's head like the Red Sea during the 2005-06 season, and we got to watch endless replays of Kobe playing Wack-A-Mole on Raja Bell's face during the first round of the 2006 playoffs. So the league is acutely aware that Kobe likes to throw elbows, both early and often.

He isn't the first "name" player to do this. Guys like Bill Cartwright and Karl Malone used to fling elbows all the time, either while grabbing rebounds or on shot attempts. And yes, those guys -- among others -- were suspended from time to time, particularly if they drew blood or the victim was otherwise injured, as Manu was (cut to gratuitous shot of bloody Ginobili...NOW). 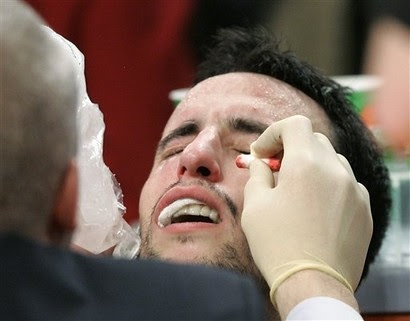 Jesus, Manu...where doesn't it hurt?!
There was a little gamesmanshit on the part of the Spurs, as well. As soon as Kobe's elbow drew blood, Manu was rushed to the Spurs' team trainer, who tended to Ginobili's leaking schnoz in full view of TV cameras and the courtside press corps. The Spurs know that the league is keeping a close eye on things, and they aren't afraid to make an example of a star player now and again to prove a point.

Where's the star treatment? Said Jackson: "I have been a little disappointed with how Kobe has been treated as a premier player." This one little statement goes a long way in explaining Phil's worldview. He is always incredulous if his star players don't get the majority of the whistles. When the Bulls were playing the Pacers in the 1998 Eastern Conference Finals, Michael Jordan tripped over his own feet while trying to set up for a potentially game-winning shot. Despite the fact that the replays clearly showed that Jordan wasn't fouled, Jackson was livid afterward. In his mind, superstars get those calls...whether they're warranted or not.

Go back and read the recap of any major playoff loss when he was coaching the Bulls or Lakers. He almost always blamed the officiating (unless it was a blowout). And he usually felt like his superstars got stiffed, even if they got 10 to 20 freethrow attempts.

Suck it up, Phil. The bottom line is that your player needs to stop throwing elbows. The league is watching everybody, and they're going to suspend players -- even players named "Kobe" -- when things get to rough. Or, if he's going to keep throwing them because it's "part of the game," then you need to accept the suspensions as part of the game, too.

Anonymous said...
Once you're in the air and your jumpshot has been blocked, it often results in an awkward flailing of the arms. So whether this was intentional or not we'll really never know, but I'm just saying that the arms flying is a fairly natural occurrence in that situation. Also from the lack of outrage/retaliation from Popovich or the rest of the players, I'm figuring that they thought it was incidental as well. Remember, Popovich told Isiah to "stop talking to his players" when Thomas approached Bowen, so if he thought Kobe punched Manu on purpose he would have been all over it.

Like it or not, the superstars of the NBA get treated differently than the others, and Phil is aware of this. You have to admit that if D. Wade had popped Manu, he probably would have been getting free throws for Manu's face hitting his elbow. Kobe is the rare superstar who gets ZERO preferential treatment from the officials. I wish there wasn't special treatment for stars, but there definitely is, and for some reason Kobe has never gotten it.
1/30/2007 8:41 PM

Basketbawful said...
I understand what you're saying, Brett, but here's the thing: you know that Kobe has a history (and a habit) of using his elbow to clip his defenders, and the people he's defending. And, just as they did with guys like Cartwright and Malone, the league is saying, "Watch it."

As for the Spurs reaction, or non-reaction...well, they certainly made sure the press got a very clear view of the damage to Manu's face. There are varying levels of gamesmanship. And, as we all know, teams regularly call the league office about stuff like that, we jsut don't always hear about it.

As for Kobe not getting any preferential treatment, you are aware he's always in the top 5 in the league in freethrows, right? Gets about 10 per game, every year? Despite the fact that he tends to take more jumpers than drives? I'm just saying. And let's not forget how, a few years back, he punched Reggie Miller in the face, and Reggie's "retaliation" was to grab Kobe's arms, and each player received an identical 2-game suspension. How does "arm-grabbing" equate to "face-punching"? Sounds like there was a little preferential treatment going on.

I love this picture from Manu and I would like to buy it. Can you tell me how can I do it?
Many thanks.
Giselle

I love this picture from Manu and I would like to buy it. Can you tell me how to do it?
Many thanks.
Giselle.

Anonymous said...
you know i understand that you would like to think that kobe likes to throw elbows. he does, btw, not trying to deny it, but the example about raja bell bitching about kobe elbowing him is ridiculous. i saw that game and raja clearly flopped before kobe could ever elbow him or anything. if i recall correctly, kobe had his back to raja and raja was going for a steal on the right side. kobe, being in TTP, swung the ball to his left side and grazed raja's shoulder and raja leaned into it and then keeled over. not a good case to make when arguing that kobe throws elbows.
raja was just mad cuz his acting wasn't fooling anyone but himself, he actually believes his flops to be fouls. i guess years of denials will do that to you.
8/10/2008 3:48 AM
Post a Comment
<< Home
Subscribe
RSS Feed
Mailing List

Word of the Day
Previous Posts
Basketbawful Hall of Fame: Alan and Jerome
Word(s) of the Day: "And whoever else you wanna name"
Worst of the Weekend: Smush Parker
The Age of Flop may finally be coming to an end
Jazz versus Lakers: A statistical analysis
Jerry Stackhouse doesn't sound half bad
Counterpoint: The Lakers aren't contenders
A loser is only a winner who hasn't won yet
Word of the Day: scalper's night off
Basketbawful Hall of Fame: Eau de Gheorghe