After playing 15 of their first 21 games at home, the Lakers went into last night's game against Dallas with a 15-5 record...the third best mark in the West*. Everybody's singing the Lakers praises these days, and Steve Kerr even thinks they're the best team in the league.

* This season, "third best in the West" really means "third best in the entire league." The East is just that bad. Orlando currently has the best record over there, and, at 15-9, they'd be the 8th seed in the Western Conference. That's right: the best team in the East would barely make the playoffs out West. Ouch.

They do seem to be more balanced this season. Lamar Odom is averaging a career-high 17.5 points and leading the team with 8.7 rebounds and 4.9 assists per game. Luke Walton is on fire from the field (51.9 percent) and beyond the arc (51.4 percent). Kwame Brown and Andrew Bynum are providing a solid "two-headed center" attack; their combined average is 16 PPG (on 57 percent shooting), almost 12 RPG, and over 3 BPG. And of course Kobe is, well, Kobe.

Now, a lot of people attribute the Lakers improved play to Kobe's maturity and increased willingness to trust his teammates. Analysts have noted that Kobe isn't demanding the ball as often, and that he seems content to play within Phil Jackson's offense until it's time to assert himself. And for the most part, they're right.

But...I watched last night's game. It was close until about midway through the fourth quarter, when the Mavericks went on a little run to go up by 10 points. And then "Dr. Bryant" snapped and reverted to his "Mr. Kobe" form. Or maybe it's just his inner Mamba. Whatever the case, he began bringing the ball up himself or demanded it as soon as it was brought over half court, then dribbled and juked and jumped his way to several questionable shots. He hit a couple, but he missed most of them, and the Mavericks padded the lead and won going away.

Of course, the commentators placed the blame squarely on the shoulders of Kobe's teammates. Tom Tolbert noted that the other Lakers had struggled all night. Although that's not quite true. Sure, Luke Walton was a corpse-like 3-13 from the field, but Vladimir Radmanovic was 5-9 and Jordan Farmar was 5-6. Of course, their minutes and shot attempts were limited, especially in the fourth quarter when it became "Kobe time."

And yet again I'm forced to come to grips with the primary reason I cannot embrace Kobe as the "best player" in the NBA. Because, quite simply, he isn't. He's the best scorer for sure (or maybe, in some cases, he's tied with Allen Iverson). But he doesn't really improve his teammates. He gave up on them last night and just stopped passing the ball. That is not what great players do.

For instance, take that that classic Game 2 of the 1986 first round series between the Celtics and the Bulls. You know the one where Michael Jordan scored 63 points in double overtime. Yeah, well, the Bulls lost that game. Why? Because Larry Bird trusted his teammates. Bird had a triple-double in that game, and he assisted on the go-ahead basket off a pick-and-roll with Robert Parish. Now Parish was a great player in his own right, but he was having a terrible game, and had spent most of it on the bench because of foul trouble. But Bird hit him with a pass when it counted, while Jordan was trying to do it on his own, and the Celtics won the game because of it.

That's why it took Jordan seven years to get to the Finals. But he learned the lesson. My lasting memory of the Bull's first title will forever be Jordan pulling the defense to him and hitting a wide open John Paxson for five straight jump shots that finished off the Magic Johnson's Lakers. And that's just one example. Another is from Jordan's first comeback year, when he was dropping his famous double-nickle on the Knicks. One of the lost memories of that particular game is that Bill Wennington hit the game winner. On a pass from Jordan.

For some reason, Kobe just doesn't get that. This is his 11th season in the league. Just think about that for a second. He's been in the league 11 years now. And he still hasn't totally figured out how to keep his teammates involved. Maybe he never will.

The Lakers are lucky to have Lamar Odom. He's their most complete player, and he also serves as the facilitator that gets everyone else involved. Kind of like Scottie Pippen was for the Bulls during those times (and they happened) when Mike forgot how to pass the rock. And you could see last night how much the Lakers missed Odom (who is out 3-6 weeks with a sprained knee). It could be be a rough month without him, especially since the Lakers play six of their next nine games on the road. Although, seven of those games come against teams below .500 (mostly Eastern conference foes of course), and one of the two winning teams (Houston) is without its second best player (Tracy McGrady). So they'll probably weather the storm and keep the early buzz going.

But trust me on this one: Mr. Kobe isn't going away. He's going to pop up from time to time, even if people don't immediately recognize it. And I can't help but think it'll end up costing the Lakers at crucial times, as it did last May when he went MIA during Game 7 of last year's first round loss to the Phoenix Suns. Which is great for me, since I hate the Lakers. So, yeah, I guess there really isn't a down side. 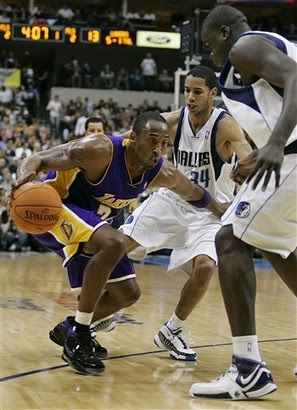 Kobe can't stop trying to do it on his own.

Anonymous said...
This reminds me of a story I read in The Onion today:

Anonymous said...
Personally, I think you are like most jouralists out there. You are a Kobe hater. He makes one mistake and you jump all over it. You see one game and all of a sudden he is a selfish pig for trying to get his team back into the game. I bet you weren't saying what a jerk when he brought us Lakers back all those other times; or taking those game winning shots. No. He's only selfish when they lose. I bet had they won that game. Kobe wouldn't have been selfish, he would have been the Saviour. Right? Right. But thats just my opinion, as is your about Kobe. Get over it. He is the best. Thats why he's 24 and not 23...if you know what I mean.
12/15/2006 1:13 PM

Anonymous said...
I critique this post on my blog:

Anonymous said...
I agree that Kobe can involve his team more more than he is doing right now. But honestly, can you really blame him? With Kwame 'Paddle Hands' Brown and Vladimir 'Brick' Radmanovic on his team, its really hard to get assists. You must understand that Kobe is a SHOOTING guard. Since he is on the Lakers, he needs to take more shots. There is no one else on the team besides Odom who can help carry the scoring load. Dont gimme some bullcrap about Luke carrying the scoring load because he can't. Even with his selfish ways, he leads all shooting guards in assists this season. Think twice before omparing Kobe to Bird. Bird had Robert Parish, Dennis Johnson, Kevin McHale, and Danny Ainge to pass to. Kobe has Odom and occasionally Luke Walton. You write as if Kobe has something to prove. I guess Three championships, 8 allstar appearances(with and MVP in one of them), 6 time all defensive slections, a slam dunk championship, and the record for the 2nd highest single-game point total in NBA history....just isnt enough.
12/17/2006 12:54 AM

Anonymous said...
I came to the site today really hoping for an article on Kobe calling Arenas a chucker because he outscored Dr. Bryant the other night in the Lakers loss to the Wizards....I mean dude, Kobe calling someone else a chucker?

Anyway, as per the Stevo comment about Kobe winning three rings (Shaq), 8 All Star appearances (shoe contract), 6 time defensive selections (is camping in the passing lanes really defense?), and the 2nd highest single game point total in the NBA (raptors dude, the friggin Raptors)....yeah, Kobe is totally elite and everyone else on the team should just sit on the bench and watch him.