One-Name Litmus Test (wun-name lit'-muhs test) noun. A method used to determine the relative greatness of an NBA player: If the player is regularly referred to and easily recognized by a single name (or nickname), then his greatness transcends any tangible value. That player therefore should be considered "untradeable" under any circumstances.

Usage example: There has never been any question about whether the Cleveland Cavaliers organization would kill themselves to hold onto Lebron. He passed the One-Name Litmus Test while he was still in high school.

Word History: The term was coined by Bill Simmons in an article titled Lakers ignored history's mistakes. While discussing a list of all-time greats who had been traded (Sir Charles, Shaq, Kareem, Wilt), Simmons paused to reflect on the relationship between greatness and single-name recognition:

"And yes, there's a reason I only used first names for the guys in the preceding paragraph. They earned the right to be mentioned on a first-name basis. And that's a good rule of thumb, for any team in any sport -- you probably don't want to lose someone who can carry off a single name. Call it the One-Name Litmus Test."

One notable exception to the One-Name Litmus Test is Denver Nuggets center Nene. However, this represents a contrived attempt at joining the One-Name Club, since he had his name legally changed (although I can't blame him for not wanting to go by his given name of Maybyner Rodney Hilario). This deception may or may not have played a part in the ridiculous $60 million contract he recently signed.

Word Trivia: Notable "one-namers" include: Dominique, Isiah, Larry, Hakeem, Kareem, Kobe, Lebron, Magic, Michael, Moses, Oscar, Shaq, Wilt. If for some reason you don't immediately recognize any of these names, you're a disgrace to your country and you probably hate your mother. 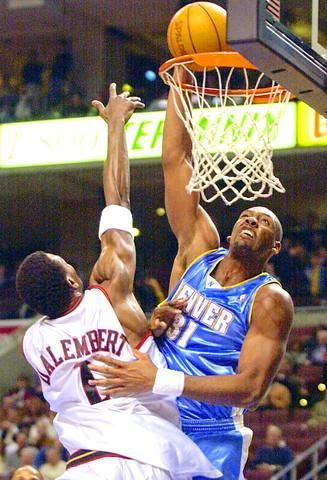 Forget it, Nene. You aren't in the club.

Chris said...
How about one-name surnames or nicknames?

Anonymous said...
Nenê demands a condition to the law: you have to be known by one name, but people must also know the rest of your name. People know Wilkens, Thomas, Bird, Olajuwon, Abdul-Jabbar, Bryant, James, Johnson, Jordan, Malone, Robertson, O'Neal, Chamberlain. Only hardcore NBA fans know Maybyner Hilário.

(Nenê, by the way, is victim to two things. First, he was probably the first and only human being in the history of the world to be named "Maybyner". Second, every Brazilian NBA fan I know agrees that Nenê doesn't look Brazilian and actually looks American. When you consider the wide diversity of looks Brazilians and Americans have, the above sentence sounds weird. But it sounds even weirder when you realize that it's true.)
7/19/2006 9:55 PM
Post a Comment
<< Home
Subscribe
RSS Feed
Mailing List

Word of the Day
Previous Posts
Thought of the day
The Croshere Era isn't leaving us misty-eyed
No talent? No problem. Sell sex instead.
Man sues Michael Jordan for looking like him
All you need to know about this year's draft
The most dangerous sport in America
Friends don't let friends drink, jerk it, and drive
NBA Live: Bird vs. Nowitzki
White and Blonde
Word of the Day: White Boy Hustle