OK, so we've discussed why Dirk Nowitzki can't wipe Larry Bird's ass, and we even proved Larry would kick Dirk's ass on Gamecube NBA Live 2006. Now it's time for a walk down memory lane to the original "who's better?" matchup. It is the battle royale that precedes all others, has the bonus element of racial tension, and still manages to involve my favorite player of all time, Larry Bird. I speak, of course, of Larry Bird vs. Dr. J.

The mop against the fro.

The hick against the doc.

"White men can't jump" vs. "I can leap over your head in a single bound, cracker."

Even back then, few people knew that scads of teens yearned to simulate a matchup between Larry Bird and Dr. J, many of them choosing to take one black rock, one white rock, mash them against each other, and keep primitive score on an abacus...

...but the folks at Electronic Arts knew, God bless their Flock of Seagulls souls.

The glorious battle would commence with the arrival of the video game "One-on-One" in 1983. Thousands flocked to their Atari 7800s, their Commodore 64s, and their Apple IIs for a chance to manipulate 17 pixels with a joystick and a button. 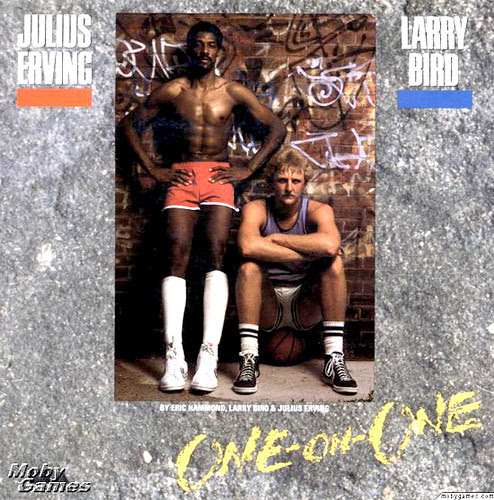 Larry and Julius at their undisputed studliest.
Just as we were all learning about the amazing 1.44 MB capacity of the 3.5" disk and excited about our impending upgrade to DOS 6.2, we were also looking forward to seeing how the wizards at EA would portray our heroes of the hardwood...

...and were astonished by the results: 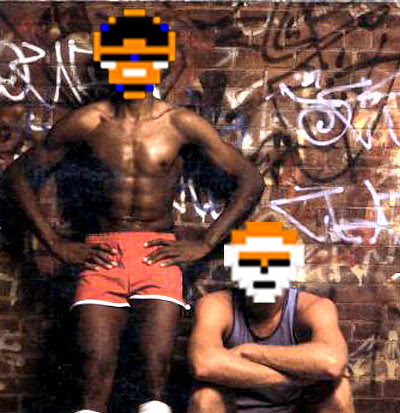 I've actually doctored this photo, replacing the faces with their 1983 EA counterparts. If you look very closely, you can see the slight pixelation around the eyes and hair. But otherwise, yes, I agree. The resemblance is remarkable. 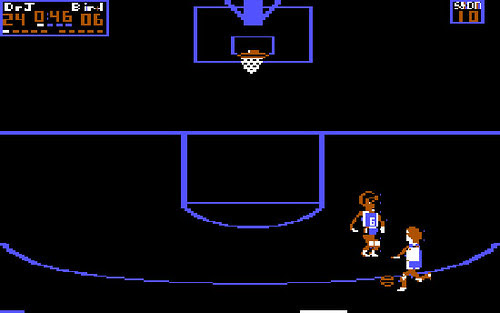 You can almost smell the sweat in the locker room, can't you?
And Dr. J 24, Bird 6? What low-grade 80's crack is this game on?
Even the options page was a piece of magnificent artwork: 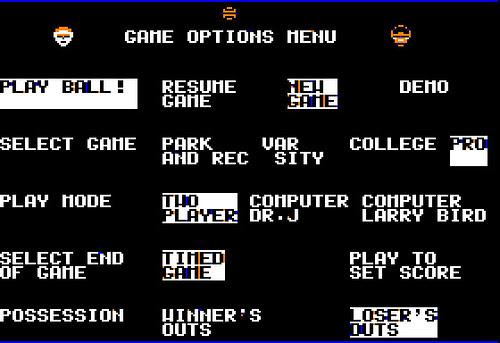 Notice how VAR SITY has to be split into two words? I'm no
programmer, but even I know they should have used a smal-
ler font. Sheesh.
"One-on-One" enjoyed record-setting popularity, amusing us with the antics of a white stick figure (Larry) and an orange stick figure (Dr. J). It's actually kind of amazing to realize what the EA guys managed to do graphically, considering they only appeared to have three colors to play with.

Despite the popularity of their game, however, the EA dudes yearned to offer the world more...

...and opportunity presented itself in fall of 1984 in the form of a girly choke fight between Larry and Dr. J. EA programmers decided to immortalize this moment in NBA history with an offshoot of it's popular game entitled "NBA Bitchslap." This version of the game was just like the original "One-on-One," except that with a simple button/joystick down/button/joystick up move, a player could make digital Larry stare down digital Dr. J, and then proceed to choke the shit out of him. 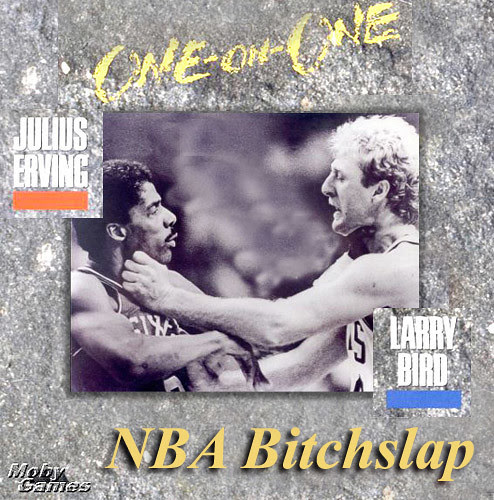 The cover of the ill-fated "NBA Bitchslap"
This game promised to be one of the greatest selling of all time, but sadly was never released. In an effort to overcome the lameness of the actual fight, EA decided to add unnecessary violence to the digital scuffle, allowing for kicking, spitting, semi-automatic weaponry, furniture throwing, and cats and dogs sleeping together. As a result, the game was far too violent for the youth it was meant to entertain, and had to be scrapped.

Was NBA Bitchslap tasteless? Or was it simply too advanced for its time? NBA players now regularly kick, spit, and use semi-automatic weaponry, both on and off the court. EA simply saw where society was headed, and put it in their game. Ballsy.

I did manage to get what I was looking for. No, not syphillis, smartass -- screenshots from the game: 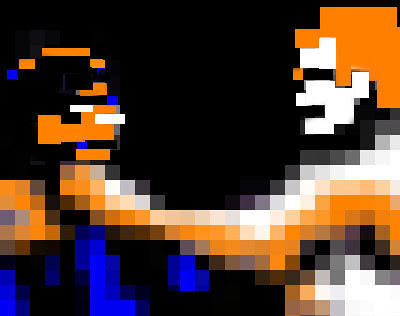 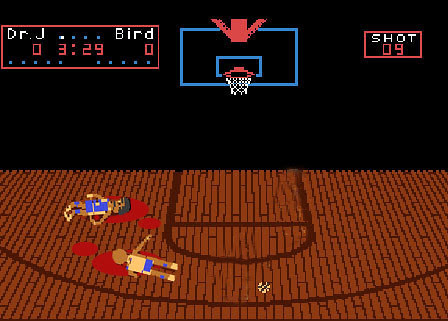 This is how every game ended - with both players
dead in a pool of their own blood. Charming.
I submit that NBA Bitchslap was ahead of its time, the Grand Theft Auto of its day. The only thing missing was pimps and hos.

Well that's it, mainly because I'm too tired to go any further. I hope you have enjoyed this trip down memory lane, back to a more innocent era -- a time when Dennis Rodman had nipples that weren't pierced, Magic Johnson didn't have AIDS (what the hell ever happened with that, anyway?), and Isiah Thomas had the respect of those around him.
6 Comments:

DBrooks said...
Enjoyed the post, but these two were hardly the "first" who's better matchup. Of course, there were no video games possible, but Jerry West v. Oscar Robertson, and Wilt v. Bill Russell were both much argued in my day--AKA--the 1800s.
7/24/2006 8:51 AM

Anonymous said...
Thank you for enlightening me. I didn't know that professional basketball even existed prior to Larry entering the league, but I looked online, and it did.

I also learned in my studies that Bill Russell and Wilt Chamberlain actually played in the 1950's and 60's. You must be confusing them with the Champaign Abe Lincolns, who were, according to my reliable online sources, the force of the league in the 1860's.

Evil Ted said...
It appears that you, Anonymous Q. Smith, have failed grasp that my writing is, um, tongue in cheek. Did that not come across, Big Dawg?

(P.S.> Anyone using the term "Big Dawg" in any conversation for any purpose - except making fun of those who say it - should immediately have their thoughts and opinions invalidated by a national oversight committee).

I described the actual event as "a girly choke fight between Larry and Dr. J," which as I recall, is what it was. While I frankly don't care enough to go find video of the event, I find it amusing that AQS thinks pummelling counts with Charles Barkley "holding" one of the participants. I'm fairly certain that my dead grandmother could take Larry if Barkleymonster were holding Larry down.
9/25/2006 3:21 PM

Word of the Day
Previous Posts
Word of the Day: horribysmal
Jordan lawsuit dropped
Steve Nash is BALD!!
Word of the Day: off the heezay
Word of the Day: One-Name Litmus Test
Thought of the day
The Croshere Era isn't leaving us misty-eyed
No talent? No problem. Sell sex instead.
Man sues Michael Jordan for looking like him
All you need to know about this year's draft