According to some sporting good manufacturers, you might be a few strategic purchases away from becoming the best basketball player in the world. There are countless bizarre products and skills videos out there, each and every one of which can unleashify your hidden athletic potentiality, transforming you from a benchwarming loser into a leaping, bounding, ball-slamming mutant. For just $49.99, plus shipping and handling.

Need to jump higher? Get some

plyometric shoes! Want to shoot with greater accuracy? Try the arm "bandit" shooting machine! Or if you just want to learn how to play the game from the ground up, you can buy Magic Johnson's Fundamentals of Basketball DVD set! Use all three, and I personally guarantee you'll be Wilt Chamberlain in less than six weeks, or your money back.

Well, prepare to have the socks blown right off your feet, because the latest innovation in basketball training technology is here...and it's the coolest thing you'll ever see (and I used to own

Deadly Towers, so I know what "cool" is). It's called Inflatable Defender: 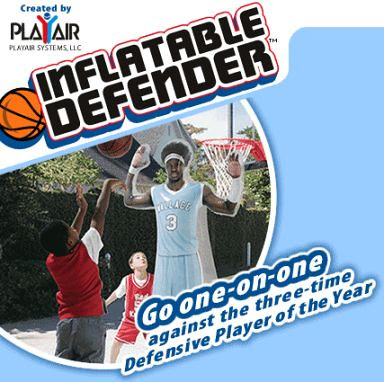 Wow. It's just like playing against the...real...thing.
Your eyes aren't deceiving you. That's a 7-foot, inflatable Ben Wallace. According to the Inflatable Defender web site:

"Play hoops on your home court with Ben Wallace. Designed for indoor or outdoor play, the life-size Ben Wallace inflatable builds your basketball skills. You'll improve your shooting arc by practicing shots over Big Ben's outstretched arms. Dribble around Ben, come off his screens for open shots or take it right to the basket over the big man. You'll learn what many of Ben Wallace's opponents already know; you must: Fear the Fro!"

And just to emphasize that last point, inflatable Ben is actually wearing a headband that reads "Fear the Fro." You know, just in case you weren't already terrified of it. Which, of course, you were. Anyway, the Inflatable Defender is a training tool that you basically stand near the basket and try to shoot over. Of course, in the old days people used to practice shooting over living, breathing human beings. So this product is basically for lonely children who are hated and shunned by their peers, but still want to learn how to play basketball.

You might think that the applications of an inflatable man in a basketball training environment would be limited, and you'd be right. But the Inflatable Defender people work their asses off trying to prove to you that this thing is the best invention since Gatorade. They describe about 47 different ways you can shoot over and dribble around it, even going to far as to suggest asking someone to hold the Inflatable Defender from behind and move it around to simulate the movements of an actual defender. Which naturally begs the point: if you can find someone to play puppetmaster for your Inflatable Defender, why not ask that person to just play basketball with you? I don't know. Maybe this is for people so ugly and sweaty, that even their friends and family don't want to see or touch them.

The highlight of the site is a promotional video that shows people using the Inflatable Defender. My favorite scene is the one where the emcee says, "Practice your drives to the basket" while some kid runs awkwardly over the Inflatable Defender and then misses the layup. Badly. The video goes a little crazy when it suggests getting together with your friends, all of whom will naturally have an Inflatable Defender, to have a game of your team versus five Inflatable Defenders. Of course, if you've ever played ball at your gym, you'll notice that these stationary balloon guys actually play better defense than a typical pickup player. 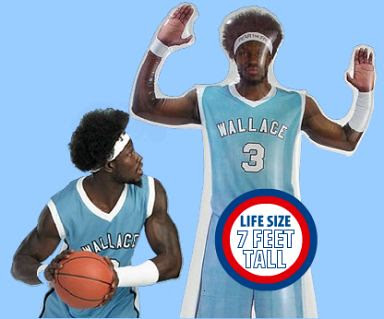 "Egads! It's my evil, inflatable twin brother!!"
Ultimately, I'm not sure the Inflatable Defender is going to do much to change the way people learn to play basketball. But it will certainly change the way we look at Ben Wallace and his army of inflatable clones...coming soon to a city full of laser-blasted corpses near you!

Edit: We've been so busy reading our hate mail that we haven't had a chance to wander through the blogosphere lately. If we had, we might have known that the Detroit Bad Boys have been talking about the Inflatable Defender for days. Damn.

Basketbawful said...
Brett, you must remember the old maxim about defense in pickup basketball: "It's the first team to 15 points, not 15 steals." And that's exactly how people play.

Personally, I always pick up my guy full court and harrass him off the ball, thus earning me a reputation as "that annoying defensive guy."
4/11/2006 4:32 PM

Anonymous said...
I heard that one of these got a vote for DPOY this year.