Karl Malone is -- in the immortal words of Mr. Samuel L. Jackson -- one bad mutha fuckah. His monstrous biceps support tiny star systems, and he once created an entire parallel universe just by flexing. In fact, outer space exists only because it's afraid to be on the same planet with Karl Malone. Maybe Karl swallowed a gamma bomb, or perhaps he was part of some secret government supersoldier program. However it happened, he is mighty.

The downside of having the size and strength of

The Incredible Hulk is that you tend to hurt mere mortals by accident. At least three Utah Jazz fans died in the aftermath of his thunderous dunks, and his powerful flatulence is responsible for at least 10 other gassy deaths. But that's what happens when puny humans try to bask in the presence of the Basketball Gods.

The real measure of Malone's righteous strength is the havok he's wreaked against other professional basketball players. I'm not talking about points and rebounds, either. I mean actual physical damage. So let's take a look at Karl Malone's Greatest Hits.

Number 5: David Robinson got knocked the hell out. Karl Malone may be a certified superhuman stud, but

David Robinson is no slouch himself. That dude is so defined, his muscles could split atoms. But back in April of 1998, Malone sunk the Admiral's battleship with a mighty elbow to the head. The former MVP and Sportsman of the Year was knocked unconscious and didn't wake up for over two minutes. When they finally revived him and convinced him that he wasn't actually Charo, Robinson was immediately taken to the hospital and treated for a concussion. As an amusing sidenote, Robinson, and not Malone, was called for a foul on the play. The fallout: Malone was fined $5,000 and suspended for one game, but was later forgiven by the concussed Admiral. 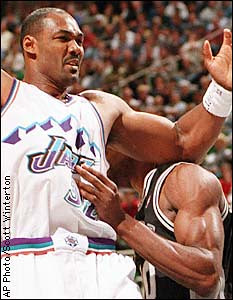 Malone drops a torpedo on the Admiral.
Number 4. Joe Klein needed plastic surgery, anyway. Joe Klein wasn't much of shot blocker, but he sure could lay that 7 foot, 270 pound body on you. On April 27, 1999, he tried to lay that big body on the wrong guy, and Joe learned a very important lesson: just let Karl Malone have the layup. After the Mailman made a special delivery to his frontal lobe, Joe's nose was so battered, he needed plastic surgery after the game. "Joe's getting plastic surgery right now," his coach Danny Ainge said afterward. "It's all right. He needed a little plastic surgery." 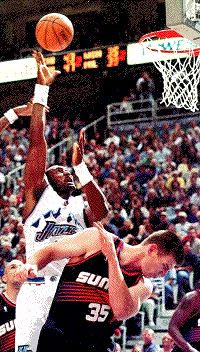 What a flop.
Number 3: You didn't need that tooth did you, Steve? Almost 97 percent of all Canadian citizens play hockey, and as a result the entire country, or continent, or whatever, is full of toothless, pockmarked freaks who have taken one too many hockey pucks to the face. Steve Nash managed to avoid all that by playing basketball. But on December 4, 2003, Steve's "good looks" (relative to other Canucks) were forever compromised. During the Lakers' 114-103 win over the Mavericks at Dallas, Nash made the mistake of trying to steal a rebound away from Malone. As everyone knows, Karl Malone doesn't like criminals, and he delivered the appropriate punishment with his Elbow of Justice. The result for Nash was a bloody face and a broken tooth. 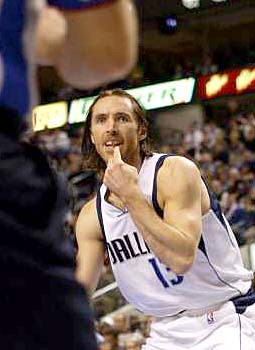 Nash whines about his broken tooth,
despite having almost 30 other teeth.
Number 2: Rest in pieces, David Ramer. When Karl Malone was still in college, he threw an elbow that sent Rice center Dave Ramer to the hospital and ended his career. From the December 6, 1984 edition of the Washington Post: "Rice junior center Dave Ramer will undergo reconstructive surgery Friday in Houston to repair multiple injuries suffered in what Coach Tommy Suitts says was an intentional elbowing incident in Monday's game against Louisiana Tech. Ramer has a depressed cheekbone, fractures above and below his right eye socket and a collapsed sinus after the incident involving Louisiana Tech's Karl Malone." What a crybaby. Anyway, Ramer never played basketball again. But on the upside, he never suffered another basketball-related injury and Karl went on to become a Hall of Famer. So everything kind of evened out.

Number 1: Take that, Isiah. Back in 1991, Isiah Thomas was pissed about getting left off the the original Dream Team. Even though it was rumored that Michael Jordan ordered Thomas' omission, Isiah decided to take his frustration out on the guy who "stole" his spot: John Stockton. The next time the Pistons played the Jazz, Isiah isolated against Stockton at every opportunity, torching Mr. Short-Shorts for 40 points. But while Isiah may have assuaged his own titanic ego, he made one of the classic blunders: he embarrassed someone who's friends with Karl Malone. And Karl Malone doesn't like that. Not one bit. The next time the two teams met, Malone went for a rebound right through Isiah's face. The blow opened up a 40-stitch gash above Thomas' left eye, and Isiah had to be carried off the court in a bucket. Thomas struggled with nausea, headaches, and blurred vision for two weeks. Of course, considering Isiah's history of thuggery and bad sportsmanship, I think it's safe to say he had it coming. 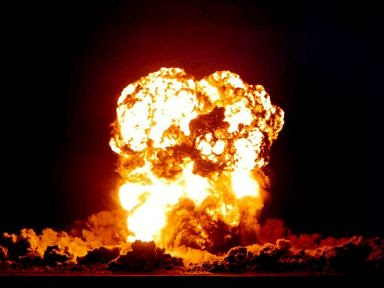 Anonymous said...
I'm sure this list could go on forever, but I have to add one more. The "special delivery" Brian Grant of the Trailblazers received during game 5 of the 1999 Western Conference semi-finals. To his credit Grant did not lose consciousness, but a nasty gash was opened over his eye. Wish I had a picture!
4/03/2006 12:01 PM

Anonymous said...
now that was a mountain of a man - one of my favorite players ever! o' how I long for the good old days when basketball was fun to watch and had plenty of wholesome characters such as the mailman
4/03/2006 8:41 PM

Anonymous said...
Karl Malone, simply the best power forward of all time! Well at least the strongest! Do not forget the time he kicked Robert Horry in the nuts or the time he slammed O'neil, yes Shaq's fat ass hard onto the floor in LA. PS. this was the only time I have ever seen a man by himself cause Shaq to slide across the floor by a foul. Malone would have had at least one championship if Jordan did not have two other top 50 players of all time(Rodman/Pippen). Malone only had the 6'1" Stockton and they still damn near won.

P.S. Regarding the Kenyan Martin thing. Malone was 40 years old and was riding his Jazzy electronic wheel chair before games. A hit across the temple and eyes while going up for a dunk would make any man or "Grandma" Roll on the ground. Kenyon should have been charged for Elder abuse. A younger Malone would have eaten him hole and shit him out of his bad ass hole.
5/03/2006 7:45 PM