Even though the Clippers lost the series last night, it was not before basketball fan Jack Nicholson made clear what team rules tinseltown (and also that the apocalypse is nigh).


All things considered, Nicholson might have had a better time watching Kobe mixtapes on his yacht.

The Clippers led from their first shot of the game until a KD jumper that came two minutes into the 4th quarter. Including that shot, Durant scored 11 points in the final period, and despite Chris Paul's heroics (he scored 14 points in the 4th), it was clear that the Thunder could taste the Western Conference Finals and were not going to be stopped.

There has to be something completely demoralizing about maintaining a lead by sharing the ball all night, and then having an otherworldly scorer like Durant make a mockery of your team effort by casually tossing the ball through the hoop from anywhere he pleases.

To add injury to insult, Serge Ibaka had been in the locker room since midway through the third quarter. Fantastic, gritty play by Nick Collison and the Big Kiwi made up for his absence, and OKC's big guns handled the offensive load. This inspired play was enough to win the game; however, I can't shake the feeling that, especially considering Serge's potential impairment, the better team did not advance to meet the Spurs, and barring some truly superhuman wing play, we're heading for a rematch of the 2013 NBA Finals.

I enjoy watching both of these teams, so it doesn't really bother me that one great team advances while another goes home. What bothers me is the "CP3 can't get past the second round, so he's not the best point guard in the NBA" talk.

Like I said, CP3 outscored the white-hot MVP in the 4th last night; this man is a bonafide superstar. The league has a lot of great point guards, and two of the very best are about to face off in the WCF, but CP3 has earned his place in history. Jeff Van Gundy said it best: CP3 not getting past the 2nd round is not a knock on him as a player; it's a demonstration of just how tough it is out west.

I didn't write anything about Game 5 and the controversial calls that led to Doc Rivers being this angry:


This was largely because I slept through the game (no regrets).

I also didn't mention anything about Donald Sterling being unfathomably pigheaded on CNN, because honestly that's not even news. Donald Sterling is an asshole. He has been for at least seven decades. He probably refused black and brown pacifiers as a baby.

I do enjoy how clearly sick everyone is of him. Last night, JVG summed it up, as he is so apt to do, when he said that he couldn't wait for a time when nobody said the slumlord in question's name. Mike Breen offered a gruff "agreed", which spoke volumes on the collective psyche of sports fans.

So, for long suffering Clipper fans, there were a few silver linings: next time the Clippers contend, their owner might not be a douchebag (or at least not so undeniably), and the team is exciting enough for Jack Nicholson to give a shit (while shitting on the Lakers and their fans with his very presence).

If that's not a moral victory for this franchise, then I don't believe in them. 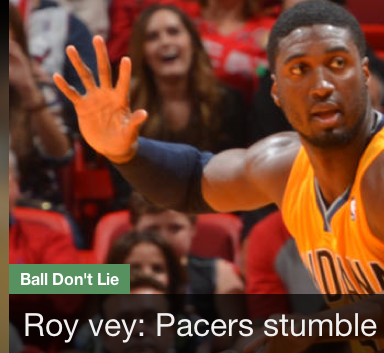 Word of the Day
Previous Posts
The Final Word (for now ... )
Show Awards and No Surprises
The Summer of LeBron has Begun
Sports Writer Writes Something Stupid
Save your eyes
Unfinished Business
Lo and Behold
Parker Strikes Back: Meme Wars
Schadenfreude
The Clippers got Jack